As you may recall, Brian and I purchased an entire local, pastured frozen chicken at our CSA just over a week ago.  Before I tell you what we ended up doing with it, you need to know a few things:

So, we started out by roasting the entire thing, using these instructions, sent to us from Brian’s brother.  Thanks, Kevin!  We simply seasoned the chicken with a bit of salt and pepper and popped it into a 425 degree oven. (Julie recently posted directions for roasting a heritage chicken that also look like they would work.) 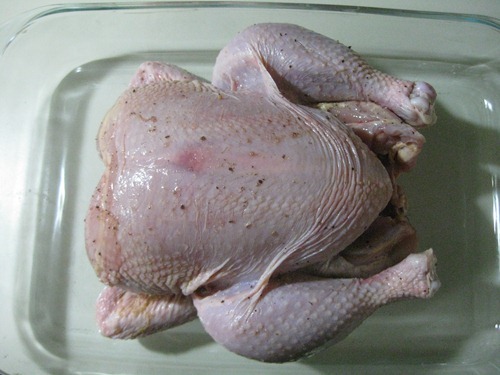 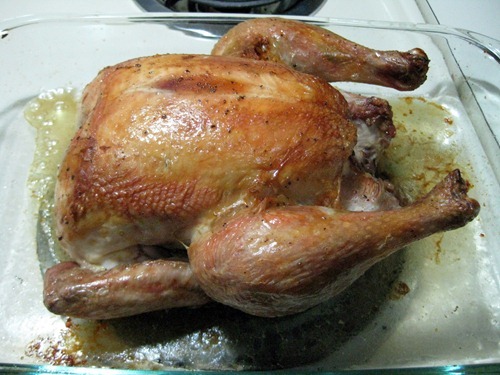 After an hour and the addition of a bit of butter because it looked like it was drying out, we took the chicken out of the oven.  We checked the temperature with our brand new meat thermometer and pronounced it done.  Brian did a fabulous job carving the meat off the bones.  After cooling, the bones went into a plastic Ziploc bag for later use.

Meal 1: Legs and Wings, served with roasted kohlrabi and turnips and salad 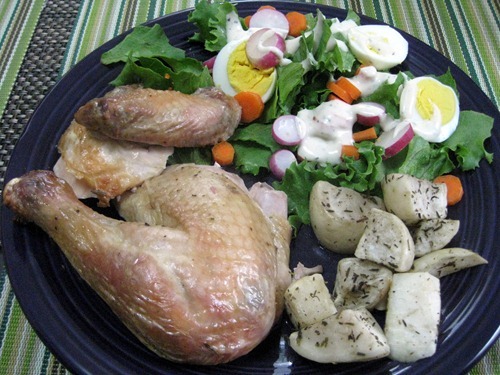 I was so thrilled that the chicken actually cooked in an hour, that it looked beautiful and that it tasted good.   I could hardly believe that cooking a whole bird was so easy.  Since we hadn’t added much to it, the flavor was pretty bland, but nothing a little seasoning couldn’t fix. 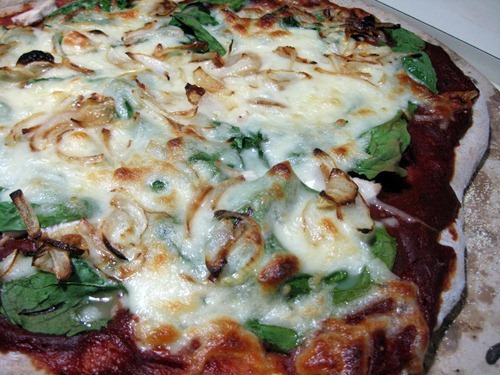 Inspired by this Kitchn recipe, we made a barbecue chicken pizza.  We used the tomato to barbecue sauce ratio in the recipe and found it worked pretty well.  I didn’t take the time to caramelize the onions, only cook them.  We also added a bunch of spinach to the pizza.  Tasty.  Also, this pizza earned Brian and I looks of awe and disbelief from a coworker who could not believe that we’d made the whole thing—even the crust—from scratch. 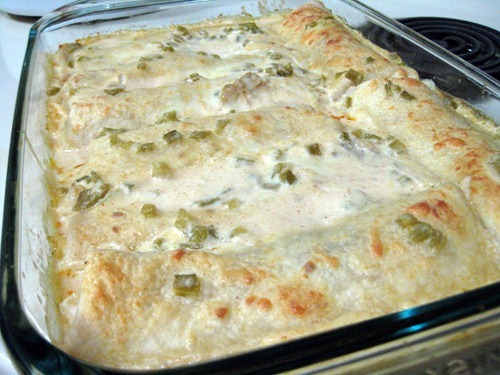 I made a few minor alterations to the Pioneer Woman’s White Chicken Enchiladas recipe, using scallions and a leftover shallot that was hanging out in my fridge instead of onion.  I (obviously) cut up and shredded our roasted chicken breast instead of boiling it as suggested in the recipe.  I also used flour tortillas instead of the smaller corn ones that Ree recommends.  As a result, I ended up with 8 enchiladas instead of 12.  Usually 8 enchiladas gets us 2 meals each, but we served the first meal with huge salads on the side.  We each only ate one enchilada, leaving us with enough for 2 more meals.  I couldn’t have planned it better if I tried.

These enchiladas were delicious.  I was thrilled that we had almost all of the ingredients on hand.  They are so rich and creamy and the chilies provide a lovely flavor.  The enchiladas are a little more work than my usual “throw some beans and cheese in a tortilla and cover with canned sauce” approach, but definitely worth it for the occasional change of pace.  I’m still trying to decide if it would be as good with pinto beans or something else substituted for the chicken.

At a couple different points during the past week, Brian made use of 2 servings of chicken (along with some condiments and vegetables).

Sunday afternoon’s project was turning the (gross looking) chicken bones into stock.  I decided to spare you any photos of gross chicken parts and the final product isn’t that exciting to look at.  Using this Simply Recipes post as a guideline, I put the chicken remains into a large pot, covered it with water, added 2 peeled and quartered carrots, 2 stalks of celery (cut in half), a quartered onion and a handful of parsley, plus some salt and pepper.  We let the stock come to a boil, then simmer covered for 2 hours.  For the second 2 hours, we left it uncovered.

The final product yielded less stock than I’d anticipated, but it was surprisingly clear and clean looking; I didn’t even both straining it through the cheese cloth after it went through my normal strainer.  I ended up with about 4 cups after removing a bit for use in the enchiladas.  It’s not a ton, but I suspect it’s fairly concentrated, so I’m planning to use it in a one to one ratio with water.  If nothing else, I feel accomplished that I made stock.

Overall, I’m really pleased with how much mileage we got out of 1 chicken that was less than 4 pounds.  I don’t plan to get another in the immediate future, but I feel comfortable that in the future, when I do this again, it will be worth the money.