Items #45 on my 101 in 1001 list was to bake a birthday cake.  Luckily for me, my dad and Brian’s birthdays are within 3 days of each other and we were all going to be together for the occasions.  It seemed like the perfect time to make a cake.

Prior to this week, I had zero experience in making a cake from scratch, though I’ve made plenty of cookies, breads, muffins, quick breads, and other baked goods.  I felt like this was a fine goal until I got the following comment from Beth:

I’m excited to hear about the cake baking adventure. So far I have had no luck baking cakes from scratch. so much so that I may never try again! cake-in-a-box works for me.

It was suddenly apparent that I needed to find a fairly mistake-proof cake recipe.  I looked through my cookbooks, poked around on The Pioneer Woman Cooks and then found my way to Smitten Kitchen.  It was there that I formed my plan: Best Yellow Layer Cake (from a post titled “Best Birthday Cake”) and Instant Fudge Frosting (which is made in a food processor!) 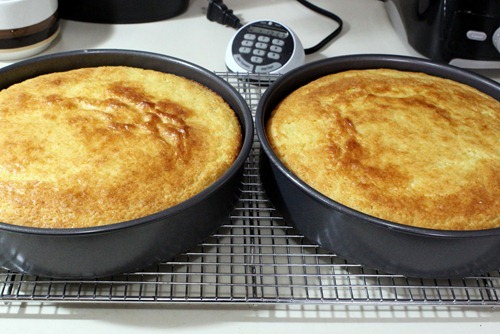 Making the cake went fairly seamlessly except for restarting at one point because my eggs had issues  that I don’t want to talk about.  They baked up well, though one layer cracked slightly during cooling, I think because it was upside down and then got shifted.  Nothing frosting couldn’t fix.

We carefully transported the cakes, wrapped in plastic wrap, placed into larger pans and stacked in a flexible cooler, from Massachusetts to Maine.  The next day, Dad’s birthday, I set out to make the frosting and assemble the cake.  Based on advice from Mom, I opted to not level the cakes since they were already fairly flat.  I was pretty nervous about the process of leveling, so I was glad that was the decision.  In the end, it worked out fine.

The simplicity of the frosting recipe both excited me and made me nervous.  Could making buttercream frosting be as easy as combining ingredients in a food processor?  Compounding my fear, my mom’s Cuisinart has a smaller capacity than mine and I wasn’t sure everything was going to fit.  As a result, I was delighted when everything fit and the appliance quickly and beautifully produced a batch of icing. 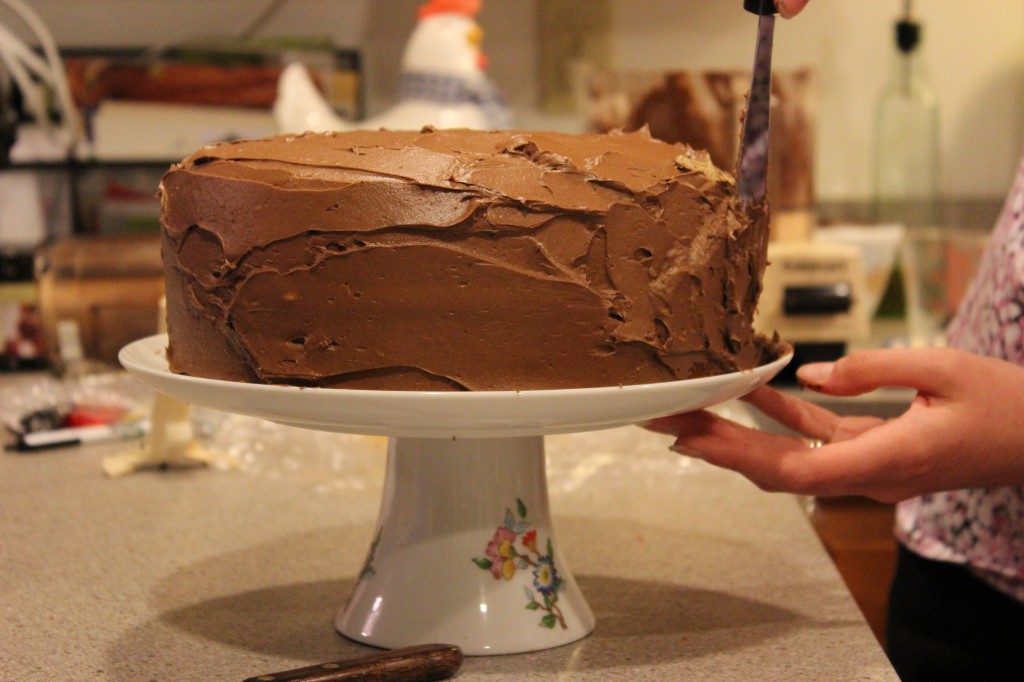 Next it was time for assembly, which was surprisingly easier than I expected.  Maybe I’m just a natural at frosting?  I still can’t believe it went as smoothly as it did, though I certainly didn’t shoot for frosting perfection.

Before long it was time to blow out the candles and serve the cake.  This also went incredibly well, but I’m pretty sure that’s because I didn’t do the actual cake cutting. 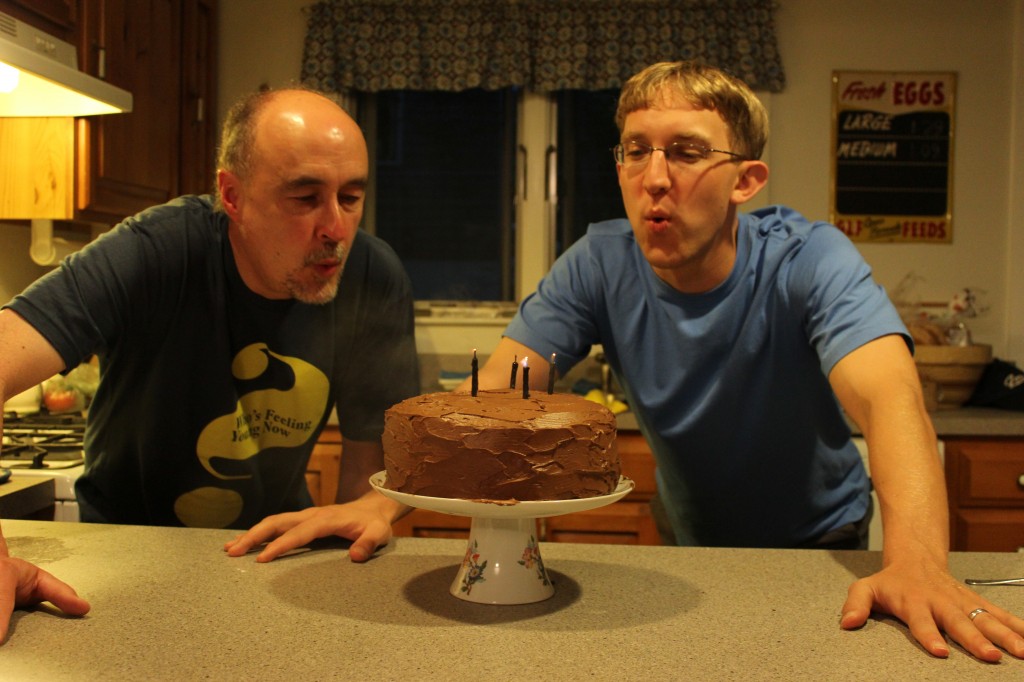 As far as taste is concerned, I’m happy with this cake but it was not mind-blowing.  The cake is good, but I wouldn’t call it “the best birthday cake”.  I don’t know if that’s the result of cooking, refrigerating, traveling, refrigerating, assembling and then eating or an error on my part or just my taste in cake.  The frosting on the other hand is amazing.  It’s the perfect amount of sweet and not at all gritty like some frostings.  I ended up with some extra, but we’ve been enjoying putting it on top of our slices. 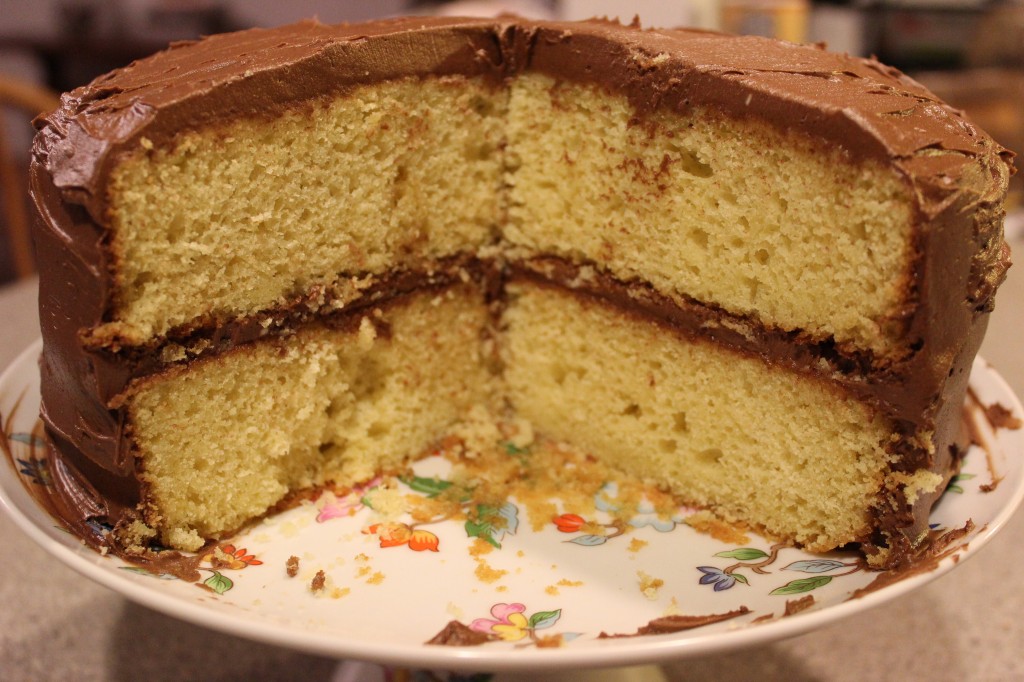 #sponsored All the time we've spent at home lately

This weekend's weather was amazing and my family e

This month's #RelishmentBakes challenge may sound