Last October, I published a post detailing my progress on my 101 in 1001 list.  Number 50 on that list was “make pierogies from scratch”.  My mother-in-law responded, volunteering to make them with me next time we were together and, over Christmas, we were finally able to make that happen.

As I’ve mentioned in the past, pierogies are pretty important to my husband’s family.  His father’s side is Ukranian and his dad has childhood memories of helping his grandmother prepare them.  Pierogies are always part of Christmas breakfast in Brian’s family.  I’ve never had them (or really heard of them) before I met Brian but since then I’ve really learned to like them.  Coincidentally we’re also living in an area with a historically Polish population, so our supermarkets always carry multiple brands and local churches and organizations sell them for fundraisers.  We always have pierogies in our freezer; they’re perfect for making when there isn’t a lot of time or options.  They also go on sale at the supermarket regularly, so that helps.

Even though it was my first time making pierogies, we didn’t slack on this project.  My mother-in-law did most of the work, choosing recipes and preparing 2 fillings before I arrived at her house for the holidays.  Some pierogies were to be filled with plain potato filling, some with potato/onion/cheese filling and some with cabbage filling.  My contribution was bringing a cabbage from our CSA.

We began by making the dough, using this Martha Stewart recipe.  It was a pretty basic dough recipe that included a little bit of sour cream — we used 3 tablespoons of sour cream instead of 2.  We made the dough, shaped it into a ball, then placed it under an inverted bowl, as per the instructions. 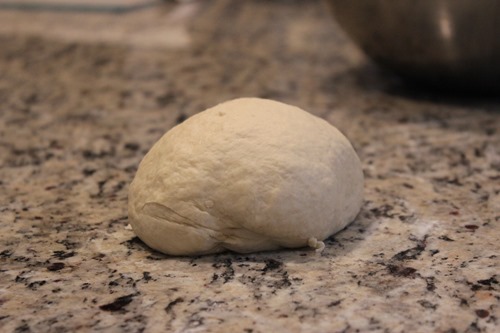 The next part of the project was preparing the cabbage filling.  For this we greatly reduced a recipe from the Martha Stewart cookbook, using my two pounds of cabbage instead of the ten pounds required originally.  We did not need to make eight dozen cabbage pierogies.  The cabbage was chopped, steamed, squeezed of all liquid and then chopped in the food processor.  Next we mixed it with cream cheese and salt and pepper. 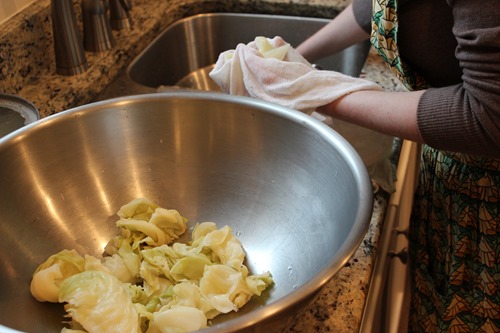 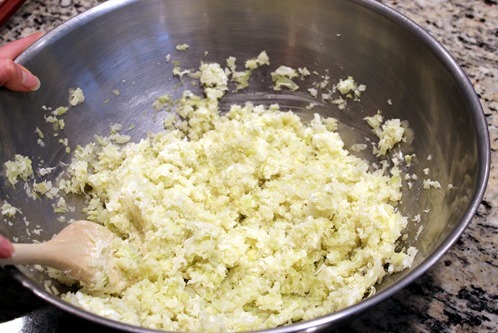 With the fillings ready to go, it was time to assemble the pierogies.  We used a quarter of the dough at a time, leaving the rest under the bowl.   We quickly determined that the best way to get things done would be to alternate roles: one of us rolled out the dough and cut the rounds while the other filled and closed the pierogies, then we switched.  The dough was incredibly elastic and we were able to get about 10 rounds from each section of dough.  It certainly took a little time to get the hang of things, but overall I feel like it went pretty smoothly.  I was really impressed with how much the dough could stretch without breaking.  To keep from confusing the three types of pierogies, we closed each variety of dumpling differently.  Cabbage pierogies were closed with fork tines, plain potato pierogies had pleated closures and the potato and cheese pierogies had plain closures. 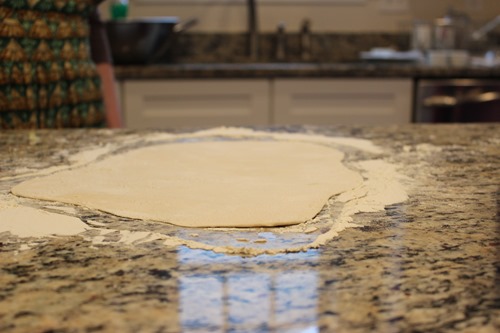 Using the advice from the recipe, we froze the pierogies by laying them on cookie sheets and transferring them to storage bags after they were frozen.  The cookie sheets we filled after this photo was taken were lined with waxed paper which made the pierogies much easier to remove from the pan.  We ended up with leftover filling for all of the varieties and about 40 pierogies all together.  We would have had more if we’d used all the dough, but we found that it was really tough even as early as a second roll so we were only able to get one set of rounds from each quarter of dough. 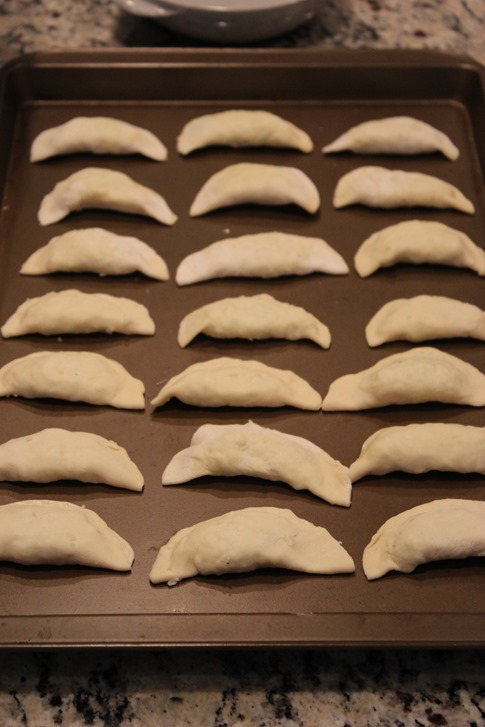 The next morning the four of us (Brian and I and his parents) traveled to visit Brian’s brother and sister-in-law, pierogies in tow.  The dumplings went straight from the freezer into pots of boiling water where they cooked until they floated. 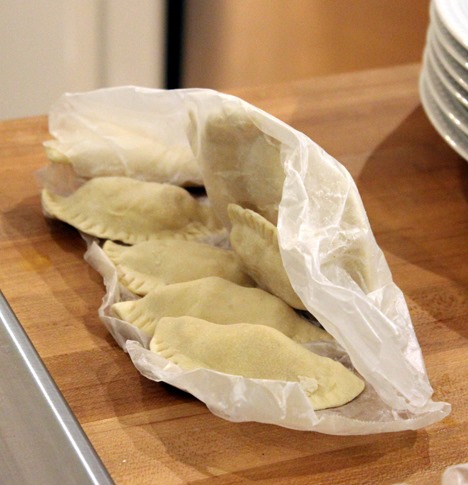 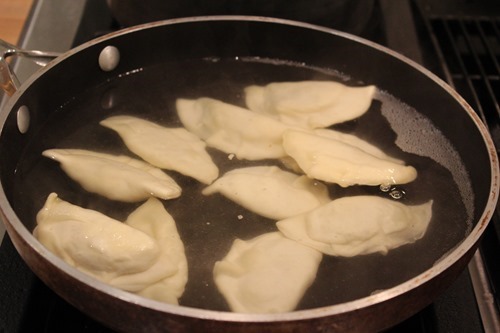 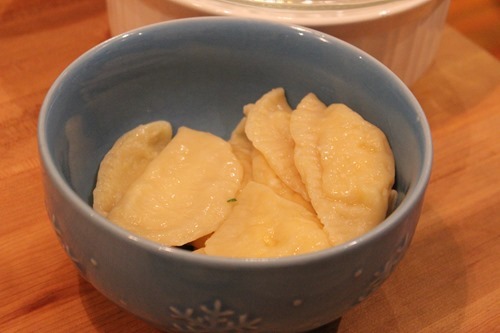 If leftovers are any indication, these pierogies went over very well.  Despite the amount of other food on the table, there was not a single pierogi left after dinner.  These pierogies definitely had a thinner dough then the ones I usually buy at the store and they stuck together somewhat during cooking, but they were very delicious. I was also very pleased with how well they held up during cooking. It was fun to eat fillings other than the ones I tend to buy.  Making pierogies was definitely a lot of work and I’m very glad I had my mother-in-law to help me.  It was a lot of fun to have someone to work with and our assembly line method of filling the pierogies made the project go much more quickly.  Making pierogies from scratch probably won’t be a regular thing for me, especially given their local availability, but I’m really glad I made these.