I’ve grown to really look forward to my husband’s family’s traditional Christmas breakfast: pierogies, kielbasa, scrambled eggs and Entemann’s Raspberry Danish Twist, which serves as a birthday cake for Jesus.  I don’t know when the tradition was started or why the Danish and not some other baked good came into play, but the kielbasa and pierogies harken back to their family roots.  I don’t worry about upholding the tradition at home most years because we enjoy it with his family when we celebrate the holiday with them.  However,  knowing my proclivity for making things instead of buying them, Brian suggested I try making a raspberry danish from scratch this Christmas.  Always up for a new challenge, I began keeping an eye out for recipes.  The first one that I stumbled upon used puff pastry, which is fine, but was a little more pre-made than I was hoping for.  So I turned to Google, where I quickly found this recipe: Iced Raspberry Danish Braid from Sally’s Baking Addiction.  I looked no further; it appeared to be exactly what I was looking for.

I made this recipe last Sunday afternoon, to be eaten on Monday morning when Brian and I celebrated Christmas as a couple before visiting his parents for the actual holiday (where there would be pierogies, kielbasa and eggs, of course).  Shockingly, I actually read the recipe before I started and knew it would take a while to put together.  I knew it was going to be my project for the afternoon and I didn’t make plans to go anywhere but my kitchen.  That said, it wasn’t difficult; most of the time needed for the recipe is just letting the dough rest in the fridge or on the counter.  Sally’s instructions and photos were incredibly clear and I had no trouble following them.  Early on I was pretty concerned with the size of the butter chunks in the dough, but they did match the recipe’s photos so I went with it. 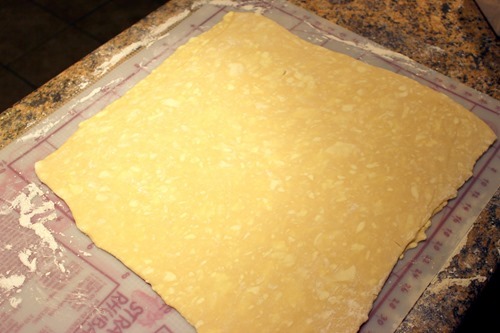 After letting the assembled dough sit in the fridge for four hours, then rolling it out and folding it three times, then putting it back in the fridge for another half hour, it was time to fill and assemble the pastry.  The recipe made enough dough and filling for 2 danishes, something I wish I’d realized more clearly when I started.  The extra dough and filling went into the freezer for future use.  The fruit filling was incredibly simple to make (I used frozen raspberries) and the video that Sally linked to helped a lot in explaining what I was doing with the braiding.  As impressive as it looked in the final product, the braiding was not difficult.  I followed Sally’s suggestion and completed the final roll out of the dough on my Silpat baking sheet.  After accidentally reading the instructions as requiring a 12 x 16” rectangle, I reworked it into the 12 x 6” required, spread the filling down the middle, cut the angled slices and folded them over on top of the filling. 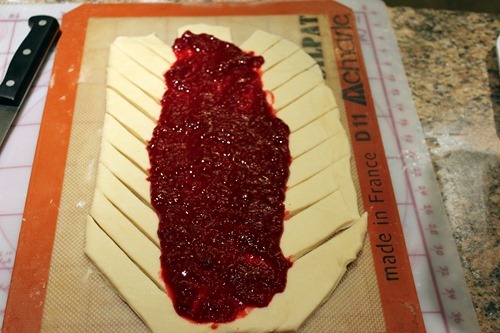 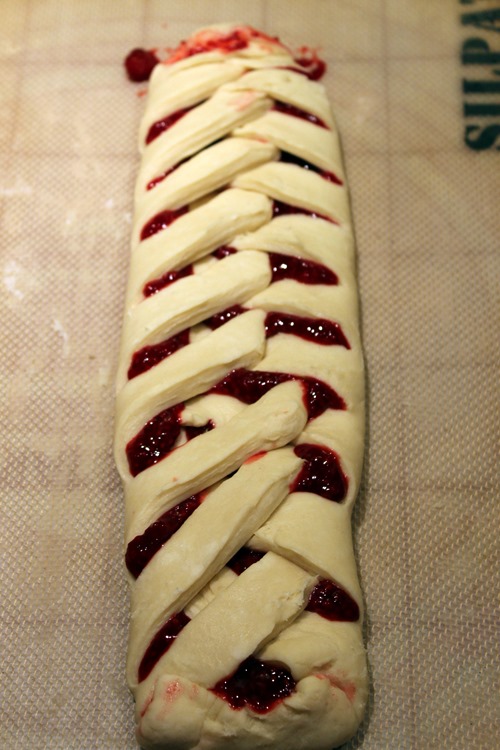 As you can see, my danish wasn’t completely even for the entire length, but this didn’t affect the taste at all and it sort of evened out during baking.  I was pleasantly surprised to discover that the filling did not leak out of the braid while it baked; I’d cooked it on a rimmed cookie sheet just in case.  Most of the filling that looks like it’s leaking out of the braid was actually just spread by my brush when I was applying the egg wash.  Even though we weren’t planning to eat it until the next day, I decided to bake the pastry on Sunday and leave it at room temperature for the next day so I wouldn’t have to worry about it in the morning.  I’m sure it would’ve been slightly better if eaten immediately after baking, but it held up very well.  Despite the amount of filling, the pastry did not get soggy.

Despite the required planning ahead, I think this recipe was definitely worth making.  It looks like an accomplishment and it tastes great;  I love how you can see all the layers of pastry dough.  With the exception of the raspberries, I already had all of the ingredients required for this recipe on hand.  I think that if I practice the slicing and braiding of the dough, the danish’s appearance will continue to improve.  In the end, I didn’t end up making the glaze, mostly because we’d eaten half of the danish before remembering that there was even glaze to be made.  When I make the second one in a few weeks I’ll attempt the glaze.  The filling is more tart than the store bought one, but the powdered sugar glaze would probably help offset this.  It should also be noted that the danish didn’t last very long in our house; Brian and I ate the entire thing before mid-afternoon, one slice at a time.  (This may be why we try to limit sweets in the house, it’s just too tempting.)  If I was making this for a bigger group, I’d definitely make both danishes – or more.  I’m also pondering the idea of adding a little bit of cream cheese along with the raspberry filling, but that may need to be left for a third iteration entirely.  At any rate, I’m really glad I attempted going homemade with our Christmas danish this year; I think I’ll be doing it again for future holidays.