While in North Carolina a couple weeks ago (my how time flies!), Brian and I decided to spend some time in downtown Wilmington and go out to dinner.  His dad suggested Phun, which according to their website is “an Asian food concept, serving south east Asian street food, Vietnamese and Thai style”. Phun is owned by chef Keith Rhodes, a Top Chef competitor, James Beard semifinalist and owner of popular Wilmington restaurant, Catch.  I was definitely intrigued. 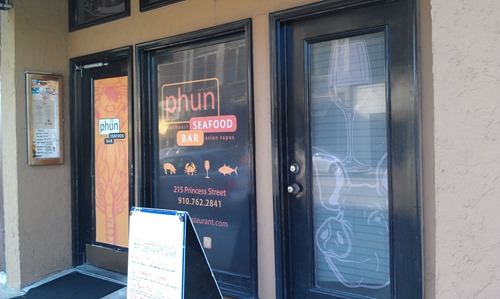 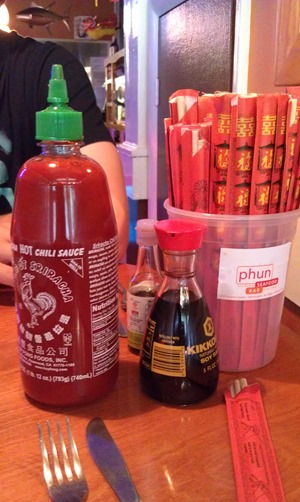 Phun is tiny; there are less than 25 seats.  We arrived around 5:00 and snagged one of the 2 two-person tables.  Along the opposite wall from the tables was a long counter with chairs, seen below.  Beyond our tables was a bar with several more seats.  Despite the fact that the restaurant is so small, there were three televisions mounted on the walls.  They were airing Food Network though, so it was okay. 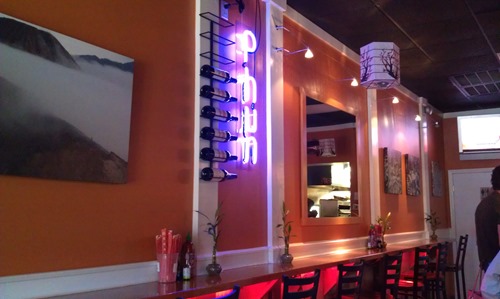 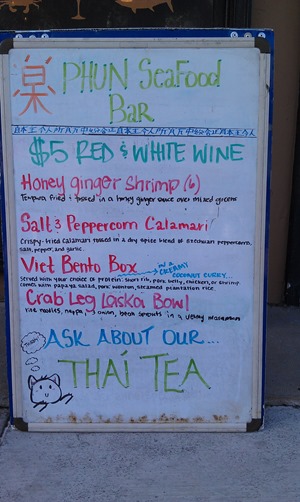 Despite the delicious looking menu, we ordered all of our food off the specials board.

We started with the honey ginger shrimp appetizer.  These shrimp really impressed me.  I didn’t expect tempura fried shrimp covered in sauce to maintain their crunchiness, but they totally did.  The sauce was spicy and sour and sweet all at the same time, very flavorful. 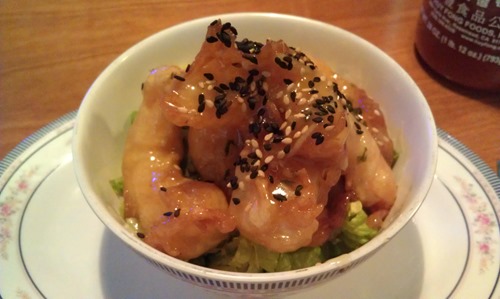 For an entrée, Brian ordered the Viet Bento Box.  His box was duck in a coconut curry, with daikon salad, pork wonton and steamed plantain rice.  I barely got a bite, but apparently it was delicious. 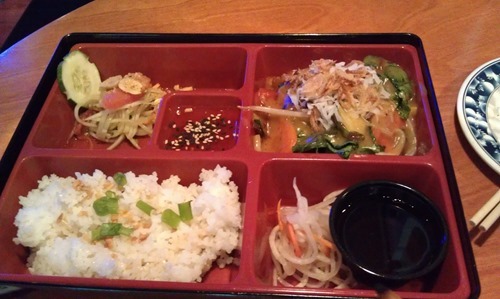 Without thinking through the whole decision, I ordered the Crab Leg Laska Bowl.  The flavor of the massaman curry was amazing and the variety of textures and flavors within the liquid was great.  What I didn’t consider when I placed my order was the meaning of the phrase “crab leg”.  I was definitely taken aback when my bowl arrived with half a crab sticking out. 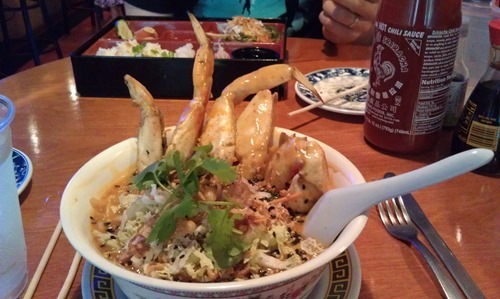 This meal will go down in history as the most ungraceful meal I have ever eaten in public.  After eating some of the curry and noodles and getting an additional plate, I removed the crab legs from the bowl and worked on eating them.  As the crab was covered in sauce and I don’t eat crustaceans in the shell often, I’m sure it was a sight to see.  I ate the crab as I extricated from the shell; my hands were too messy to do anything else.  All that said, the crab tasted amazing.  It was tender and flavorful and wonderful.

Given the opportunity, I would definitely go back to Phun.  I think getting there early was key; the restaurant was full by 6:00.  The service was good, the atmosphere was fun and the flavors were some of the best Asian-style food I’ve had.

Revisiting the Adams Ale House
The Meat Market in Great Barrington – Burger...
Dining Out Vegan (Vegan, Days 5 and 6)
My First French Macaroons
Did you enjoy this post? Share it!
« On Vacation from Vacation
10 Years »