Glass Bottom Brewery appeared on my radar during my birthday month celebrations.  One of our stops was Hops and Vines, a Williamstown restaurant that we’d been planning to try forever.  We had one of the best restaurant meals I’d had in a long time (the review still may get posted one of these days) and I ordered an awesome beer: Glass Bottom Brewery’s TeaSB. As someone who loves Earl Grey tea and has relatively recently come to love beer, it was a perfect match.

So, as one tends to do, I looked up the brewery when I got home and was tickled to discover that they were located in Lee.  I was less tickled to discover that their North County distribution wasn’t great.  But Brian found it at a local store and we enjoyed TeaSB and Motte and Bailey in the comfort of our own home.  Since then, we’ve seen Glass Bottom Brewing beer in a number of local stores and the list of establishments on their website carrying it has expanded.  And last weekend, we had time to go check out their brewery. 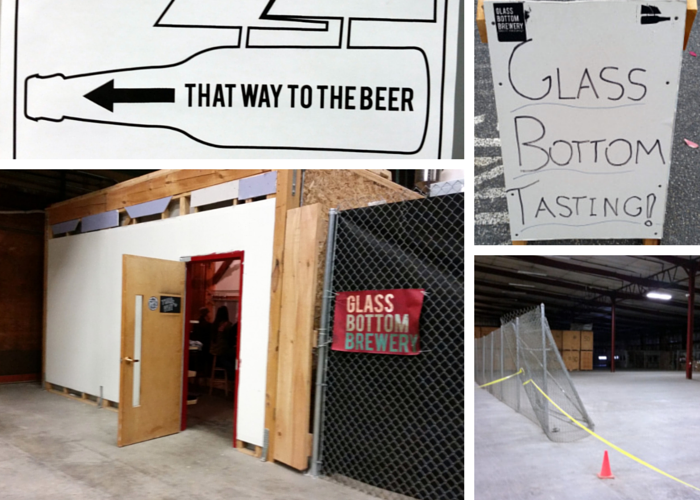 Visitors should be aware that, even though the directions on the Glass Bottom Brewery website are really good, locating the tap room can be a little unnerving.  It’s located in a small area of a huge, apparently mostly empty, warehouse.  Luckily, there were plenty of signs to help us find our way.  The tasting room was pretty small; there were about 8 stools to sit at around the bar.  This makes sense, of course, Glass Bottom is a nanobrewery (they brew less than 100 gallons of beer at a time) and is relatively young, being established in 2012.  There were 4 other people present when we arrived, but they completed their visit shortly after we got there. 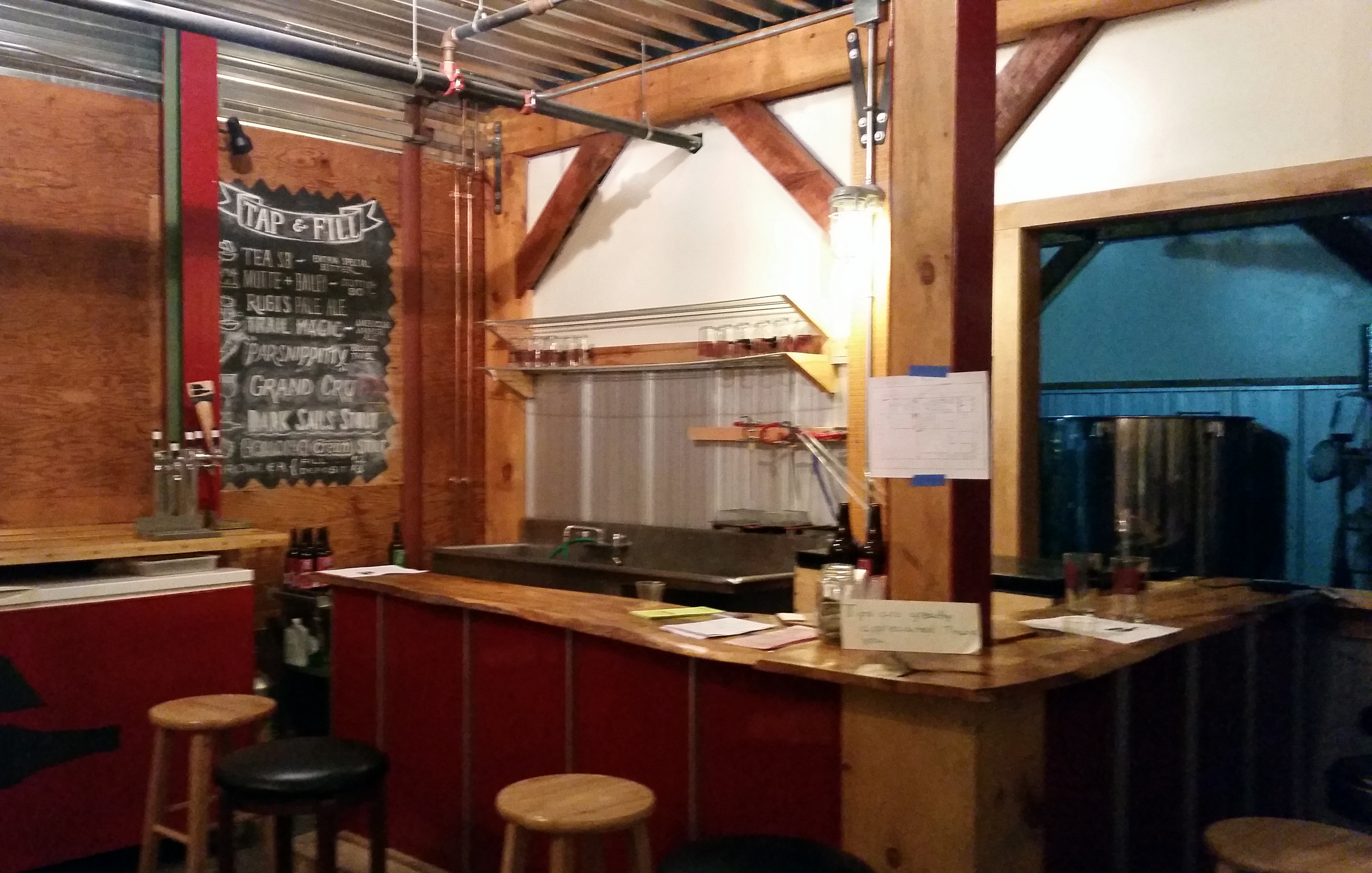 Ezra, one of the two Glass Bottom Brewery owners, was manning the tap room on Saturday and he was awesome.  He presented us with a list of the current beers on tap and suggested that we go through the beers in a recommended tasting order: TeaSB, Motte and Bailey, The Cheesemonger’s Pale Ale, Parsnippity, “Sting” IPA and Banana Cream Stout.  I liked all the beers, even the IPA, but the most surprising was the Parsnippity.  The list of vegetables I dislike is very short and parsnips are one of the few items on it.  But the beer is awesome, with only a light hint of parsnip sweetness, but the overwhelming flavor I’m accustomed to. 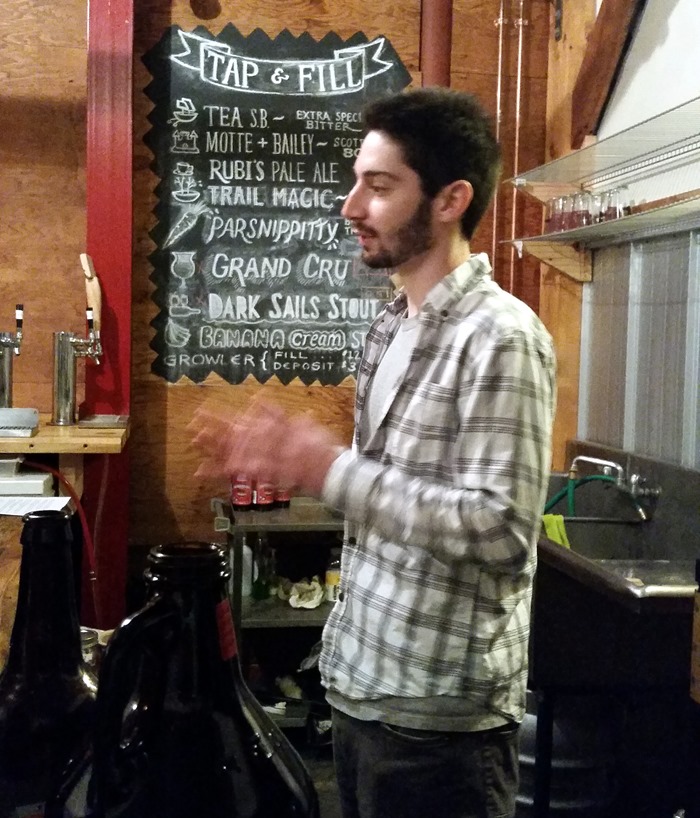 The pours were generous and it was great to chat with Ezra as we sipped.  I love that the beer is brewed in Lee with hops grown in Great Barrington, making Glass Bottom live up to its claim as “Berkshire’s Homegrown Beer.”  Turns out the parsnips even come from Mighty Food Farm — our CSA!  Ezra answered our questions and offered to pour us a pint when we had completed the tasting.  At that point, we were too full, but we did make some purchases. 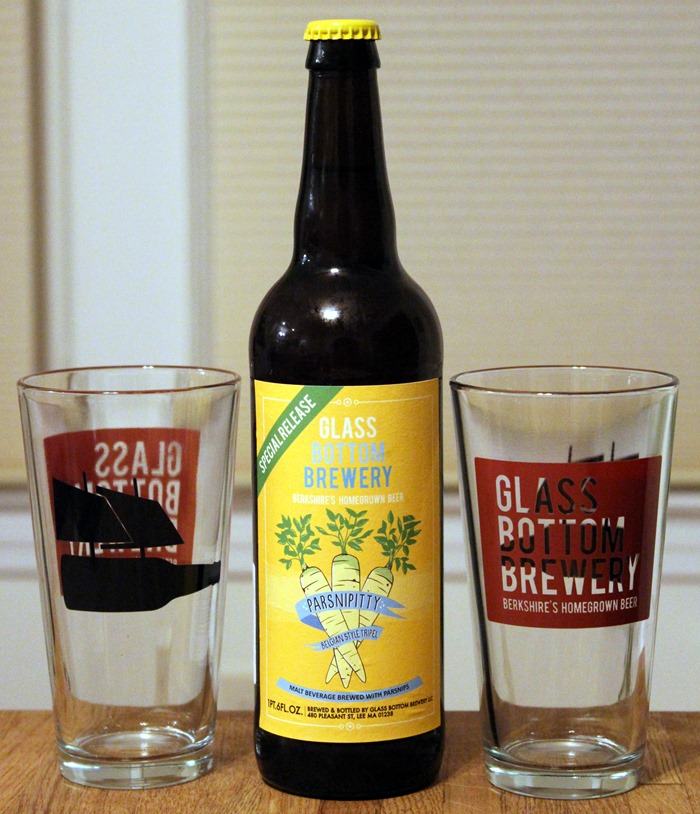 Glass Bottom Brewery’s tasting room is currently only open on Saturdays.  I highly recommend stopping by or tracking down their bottled brews (currently only available in Massachusetts).  Ezra and his business partner, Evan, seem to have some really big ideas and I’m excited to see how Glass Bottom Brewery distinguishes themselves in the crowded craft beer market.  Tea and parsnips seem like a good place to start.

This week I - drove across the state for 4 days of