It seems like forever ago that one of my friends first mentioned Artisan Bread in 5 Minutes a Day : The Discovery That Revolutionizes Home Baking by Jeff Hertzberg and Zoe Francois.  The conversation happened in the context of a chat about the bread baking process I’d been using.  I wrote a long post about it in 2013, but the short version is that any time I had a free Saturday, I was spending it at home baking my own bread.  I loved the recipe I was using and the resulting product, but sometimes getting bread to happen on my schedule was less than easy.

My brother-in-law and his wife bought me Artisan Bread in 5 Minutes a Day  for Christmas 2014, but it took me until the following May to get up the nerve to try it.  Even though the book’s whole premise is that bread baking can be easy, the introductory explanation made me nervous.  There were instructions about how to scoop the flour, solutions to baking problems, and a 6 page explanation of the Master Recipe.  But I was hooked with the first loaves I attempted (seen below): 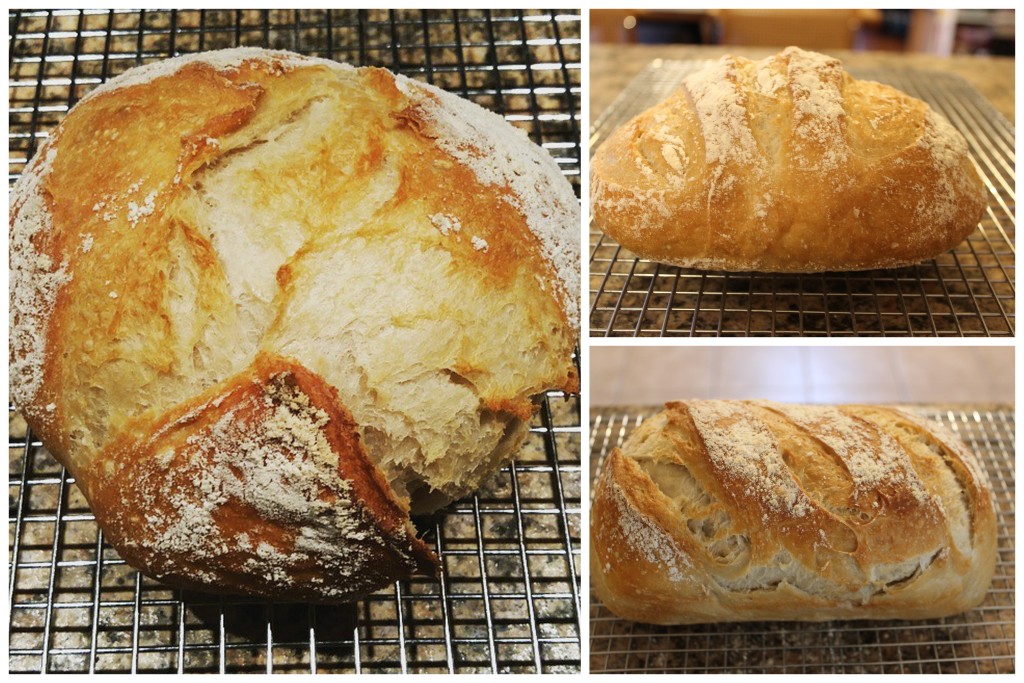 Here’s the key idea of the book: “pre-mixed, pre-risen, high-moisture dough keeps well in the refrigerator”.  The “5 minutes a day” concept works like this: you mix up the dough for the recipe you want to make (most recipes make 4 loaves per batch), let the dough rise for a couple hours and refrigerate the dough until you’re ready to bake.  Sometimes my dough sits in the fridge for a day, sometimes it sits there for a couple weeks before I get around to baking it. Yes, some recipes can last 14 days between making the dough and baking.  Talk about flexible! When you’re ready, remove the amount of dough needed for the loaf you want to make, allow it to rise (around 40 minutes), and bake it.  Most of the loaves I’ve made have required between 30 and 45 minutes to bake (the “5 minutes a day” is active time, not total time). 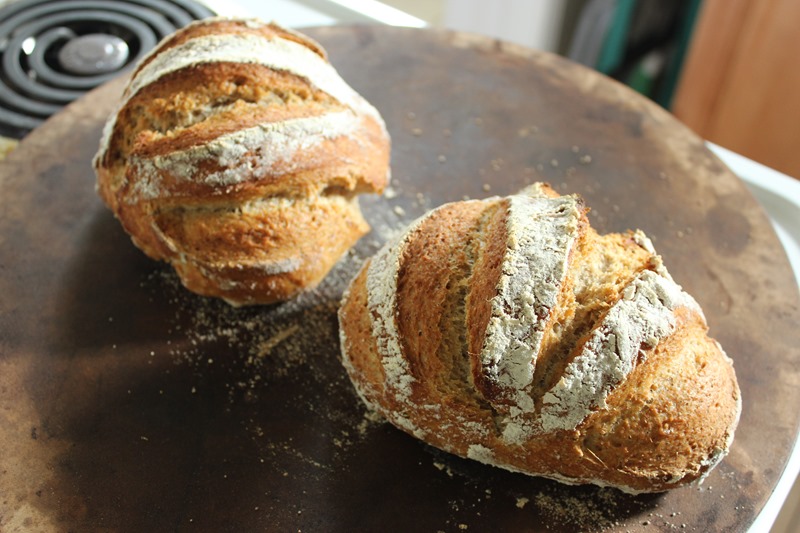 Despite my initial concerns, I’ve actually found the recipes in Artisan Bread in 5 Minutes a Day to be flexible and forgiving.  I’ve made adjustments to my favorite recipe, European Peasant Bread, to include more whole wheat flour.  I’ve gotten really fast at mixing up batches up dough by hand, forgoing my stand mixer.  Sometimes I bake one loaf and put the rest of the dough back in the fridge, sometimes I bake 2 loaves at once and then the other two right after.  The resulting loaves are generally smaller than what a standard loaf pan would make (though some recipes do use a loaf pan!), but since it’s so easy to make and turns out so well, I don’t mind.

Brian and I love the bread that this method makes – the inside is soft, the outside has a great crust.  And it seems like everyone else we’ve shared it with has loved it as well – and has been shocked that I made it. For a while, I was tasked with bringing loaves to adult Sunday School every week to feed the other members of my class.  That’s all we’d have – bread and cheese.  Our families also adore this bread and I always bake up several loaves in advance of any of our parents coming because I know they’re going to eat a lot of it.  And that brings us back to the brilliance of this method – if I have a batch of dough waiting in the fridge, I can bake more loaves for breakfast while people are waking up and then set up another batch to do again the next day.  It’s so simple. When I’m feeling especially organized, I make a whole batch of bread and put a couple of sliced loaves in the freezer, which means I’ve got all kinds of bread options available when I need them. 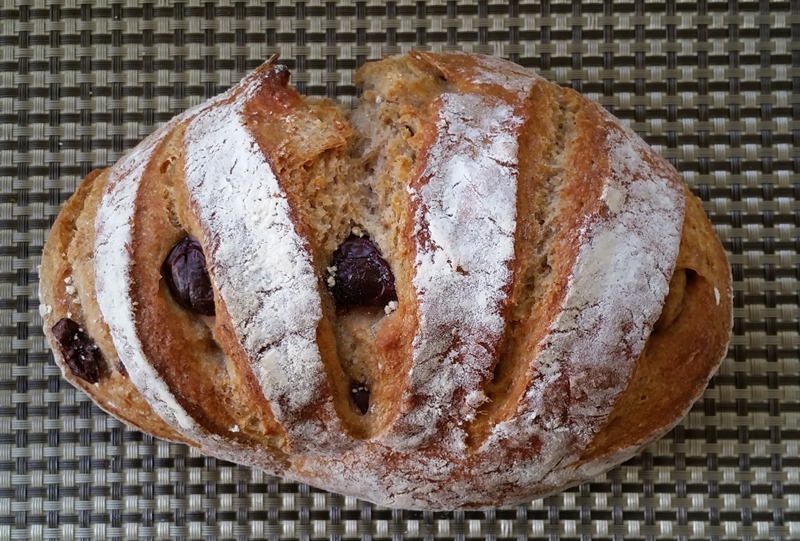 I’ve tried a bunch of recipes since I started working with this book, including bagels, rye bread, pretzels, foccacia, zatar flatbread, and olive bread.  Everything I’ve attempted has turned out delicious, though some of my loaves have definitely looked better than others.  There are still more recipes I want to test: ciabatta, raisin walnut, pizza dough, spinach feta bread and chocolate bread, to name a few. 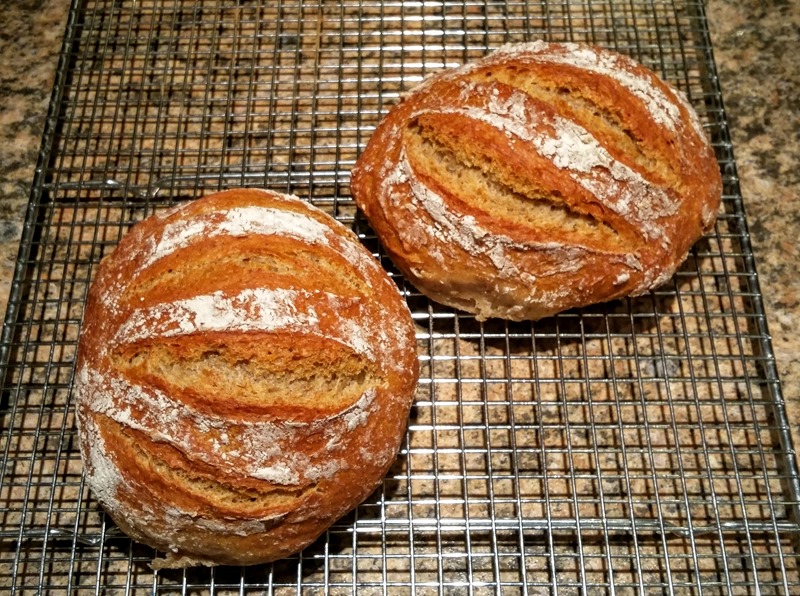 I have found that having a few of the recommended tools are helpful.  I already had a baking stone when I started making bread from Artisan Bread in 5 Minutes a Day, but adding a pizza peel to my kitchen was a great move as well.  Also, you may recall my pilgrimage to King Arthur Flour last year to get a dough rising bucket.  The dough rising bucket has allowed me to make the full, 4 loaf batch of all the bread recipes, which makes Artisan Bread in 5 Minutes a Day even more efficient.

Disclosure:  This post contains Amazon affiliate links, but is not a sponsored post.  I’m just sharing because I love this book! Thank you for your continued support of Relishments.