I am so glad that July’s Grain of the Month was wheat.  For the first time since corn in October, I didn’t have to track down a strange ingredient and learn to work with it.  I’m sure I’m not alone in feeling more comfortable with wheat than any other grain.

If you’d asked me a few months ago, I probably would’ve said that I wished something more interesting was scheduled for the summer, when I’d have time to really do some cooking.  This summer hasn’t exactly met expectations in the time department, however.  Between summer school, planning a wedding shower, getting ready for my grad class and trying to catch some of the Olympics at other people’s homes, I’ve felt fairly frustrated with my lack of free time.  I’m ready to get back to the regularly scheduled programming of the school year when I know it’s going to be crazy but at least there’s routine.  My apologies to all the other teachers who disagree.

As a result, I didn’t made a ton of recipes using wheat.  I did make pizza once or twice, none of which got photographed.  One of the pizzas was topped with tomatoes, mozzarella and arugula and it was one of the best pizzas I’ve made to date.  I also made a batch of whole wheat cranberry muffins,  but I wasn’t very happy with the way they turned out.  I really do want to perfect that recipe and share it with you all.  Maybe in August? 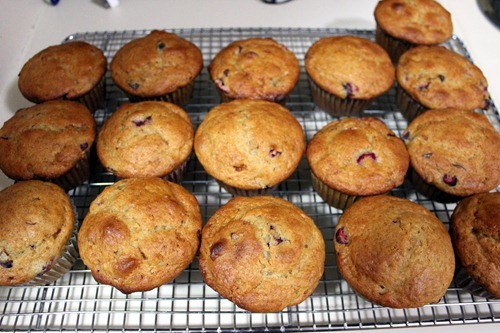 Of course, I still managed to try out a new ingredient.  It took a little searching, but I found farro at Guido’s Fresh Marketplace in Pittsfield.  Farro is an ancient form of wheat that sort of reminds me of barley.  I used it in 2 recipes.  The first was Swiss Chard Topped Farro with Crumbled Bacon.  I was really happy with the way this dish turned out and the fact that I could incorporate some of our CSA share into it. 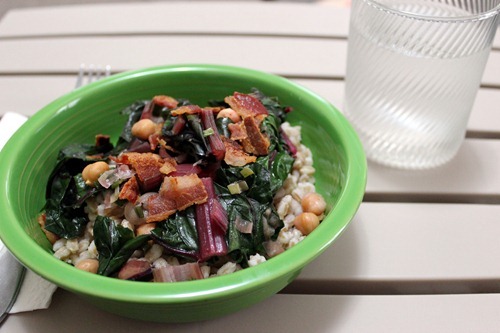 I also made The Chic Life’s Rosemary Garlic Farro with Chickpeas.  The farro in this dish was even better than the first; the broth gives it a lot more flavor.  This dish was also incredibly easy to put together. 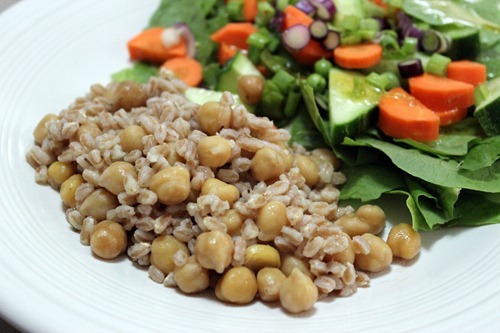 It’s a little unfortunate that I wasn’t able to do more with wheat this month, but at least August has a few more free days in it.  August’s grains are rye and triticale.  Triticale is apparently a rye-wheat hybrid, which I’m doubting I’ll be able to find.  I’ll definitely be making rye bread though.