It’s important to plan.  It’s also important to be flexible.  My last menu plan was a case study in being flexible: I don’t think I made anything that was listed on the second week.  It occurred to me after posting that I wasn’t going to be home for dinner on Monday, so I decided not to make the chickpea pot pie.  I only went to the supermarket that doesn’t carry soba noodles, so I skipped the soba noodle soup.  I never got around to making the curry either and we went out for dinner one evening too.  I did, however, make the feta and spinach crostata, which was awesome enough to warrant a photo on Instagram.  It’s weeks like that which make me wonder why I even bother making plans, but the next couple weeks look much calmer than the last several, so I’m hoping to really get back into the kitchen. 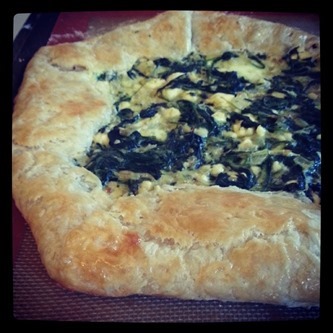 We ended last week with a whirlwind trip to and from Virginia for a family wedding.  We arrived home Sunday night with no motivation and a random assortment of food in the house, so we stopped at the supermarket and picked up frozen pizza.  Yes, you read that right.  Honestly, I can’t remember that last time we bought a frozen pizza; I think it was before we were married.  Though it hit the spot, it also caused me to do some thinking about my priorities and what kinds of things I could have on hand for times like that.  Suggestions?  I finally managed to make it to the store today, so the first couple dinners of the week were based on what I could dig up in the pantry.  From today on through, real meals!

This weekend we resume picking up produce from our CSA and I am so excited.  The first few weeks will be pretty basic…lettuce, radishes, spinach etc., but it will be so nice to have a full stock of vegetables again. There’s supposed to be arugula, which is one of my favorite things, and I’m going to do some galette experimentation with it this weekend.

The End of Summer (CSA Menu Plan#9)
Leftovers and Surprises – A Menu Plan
Starting the Countdown (CSA Menu Plan #66)
Kicking Off The Year: January 3-16 Menu Plan
Did you enjoy this post? Share it!
« Review: Tomatoland by Barry Estabrook
Highlights: Frozen Treats for Summer + A Sponsor Shoutout »