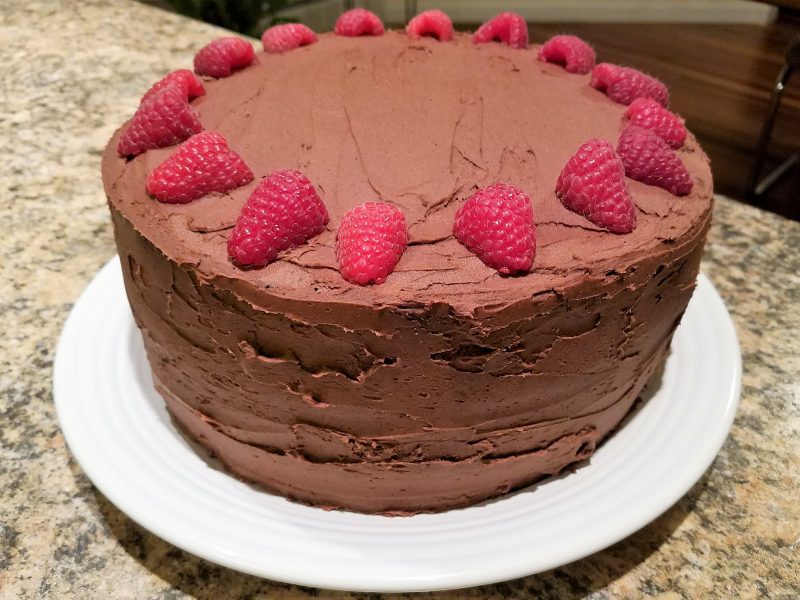 I take back what I said last month about King Arthur Flour only wanting to do braided loaves of bread as Bakealong challenges. This month they took all my comments from last month (not really, they don’t know me at all) and went a totally different direction.  Though I probably didn’t need to have a 9-inch wide, 10-inch tall cake in my life, I’m so glad I was challenged to make this beautiful and delicious Chocolate Mousse Cake with Raspberries. 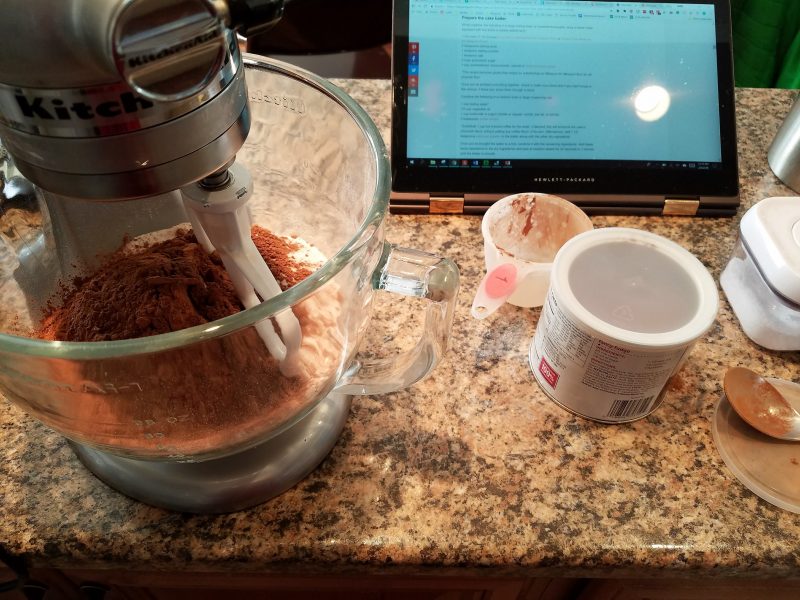 This cake is definitely a project! It took me the better part of a day, 3 cake pans, both my stand mixer bowls multiple times and several other tools I don’t usually make use of to get it done.  It did not, however, require much in the way of specialty grocery shopping, which I appreciated.  I picked up more cocoa powder (I just used regular Hershey’s and it worked fine), cream cheese and heavy cream, as well as the raspberries.  Initially, I was a little annoyed about buying berries out of season, but they ultimately made the cake for me and I’d do it again in an instant.  Since it’s February and plenty cool in the Berkshires, I omitted the ClearJel. 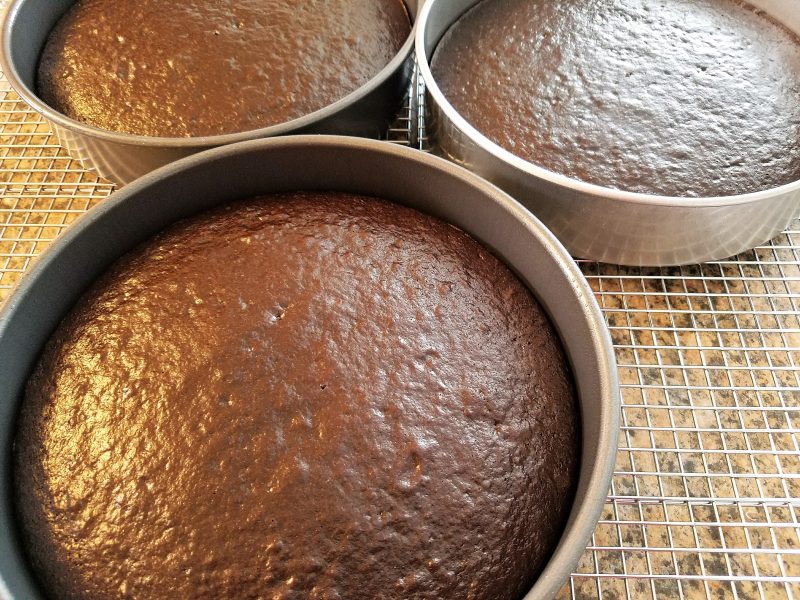 Unlike most Bakealong challenges, I made use of the King Arthur Flour step-by-step blog post-style directions when following this recipe.  There are many steps, including making the cake, making the mousse filling and making the frosting (which, contrary to what I initially believed, is not the same as the filling).  The step-by-step was very helpful and useful, especially when making the mousse. 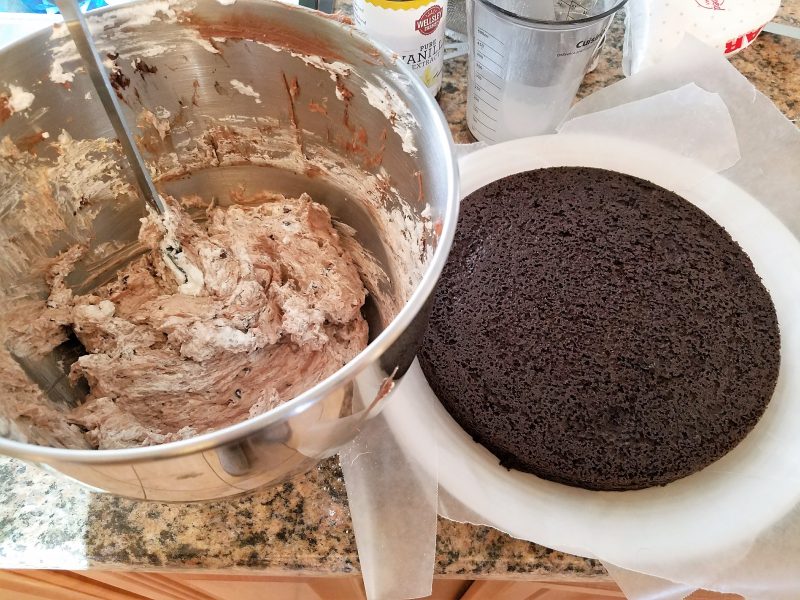 I didn’t have any issues with making or baking the cake rounds.  I went with the 3 9-inch layer option based on what pans I had available and, having greased the pans well, they came right out.  The filling came together without issue and I highly recommend using the mini chocolate chips for additional texture if you’ve got them. 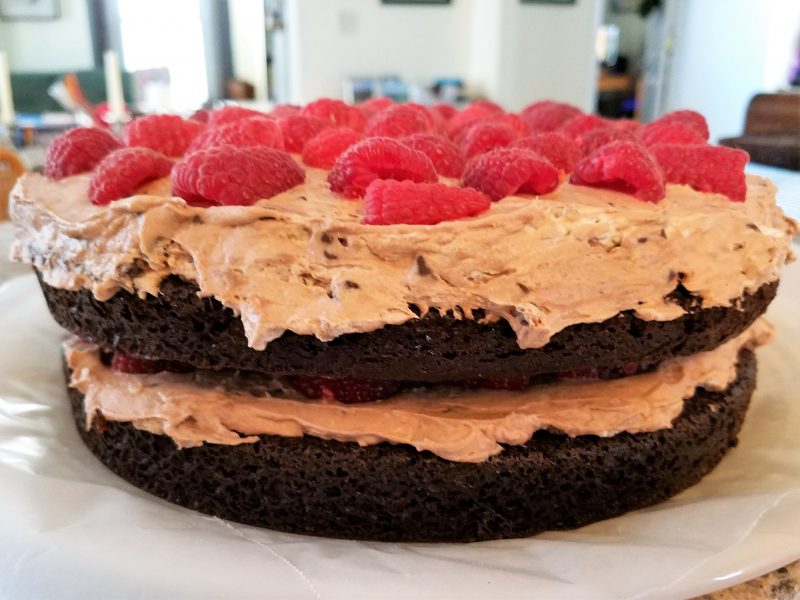 I was pleased to be able to put raspberries between each of my layers and on top of my cake with just 12 ounces of berries.  I didn’t feel like the cake lacked at all, despite the fact that the recipe calls for more than I used.  It was also much easier to cut the berries in half lengthwise than I anticipated; I thought they’d get squished or fall apart but they did not.  I used my offset spatula to spread the filling and it made life much easier. 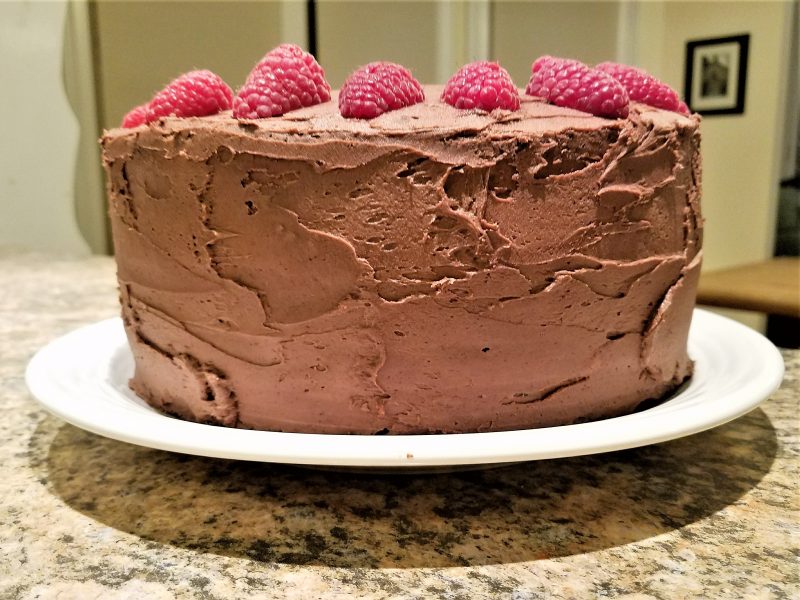 Probably the hardest part of making this cake was putting on the outside frosting.  Though the frosting was easy to make, the application was tricky.  For one thing, this cake is pretty large and for me, there was not much frosting t0 spare.  I wanted to be sure to get good coverage.  The raspberries between the layers meant that, from the side, there was space between each of the layers at the edges.  It was a bit of a struggle to get frosting down each of the sides that covered the holes without filling them in. 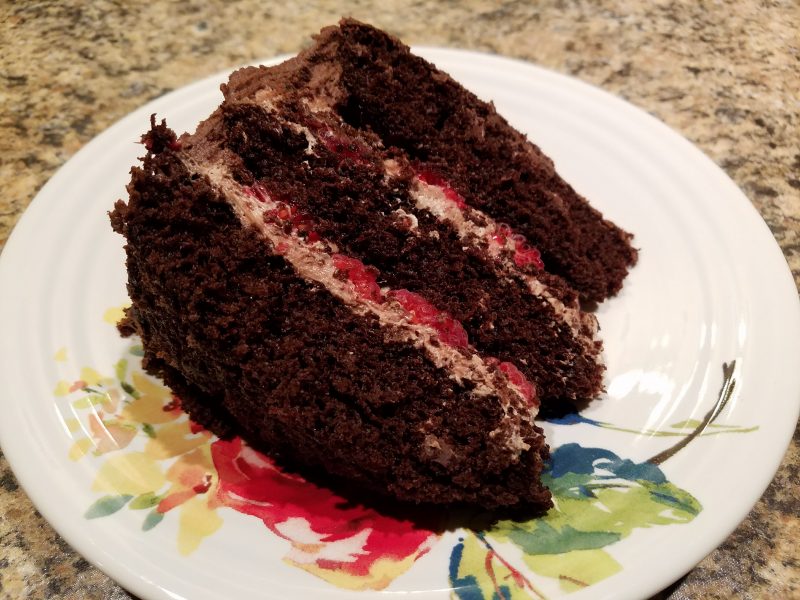 In the end, it worked out and I got the cake coated.  By then, my time, energy and motivation had been exhausted, so I sliced some raspberries for the top and skipped any fancy decorations.  Making this cake was enough of a feat on its own. 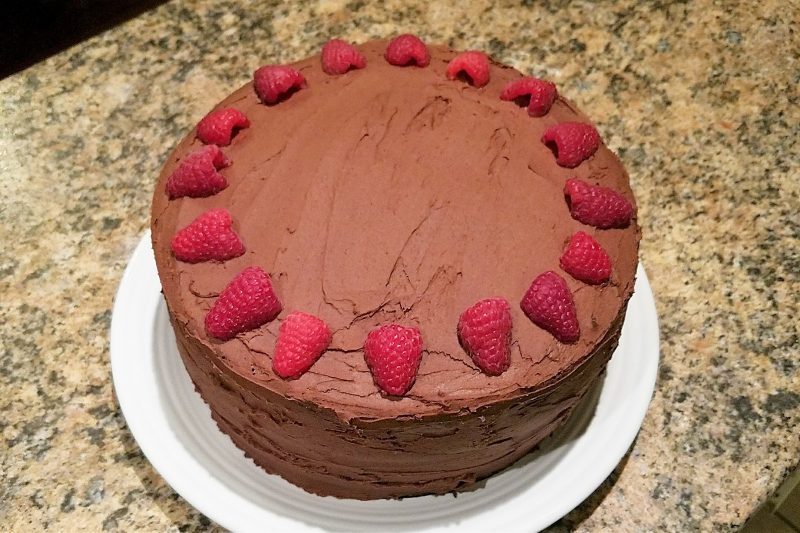 I don’t know when I’ll have occasion to make this cake again, but if I could come up with such an occasion and had enough time, I would totally make this cake.  I was pleased with every aspect of it – the cake layers were moist and dense and chocolatey, the mousse was light and the raspberries and chocolate chips add so much flavor and texture.  The frosting held up well even after several days in the refrigerator.  We put about half the cake in the freezer and I’m looking forward to pulling it out one of these days.  This Chocolate Mousse Cake with Raspberries was definitely one of the most challenging and time consuming food projects I’ve attempted in a long time and I am so pleased with how it turned out.  Maybe more cakes need to be in my future?