I spent too much of yesterday agonizing over a barbecue.  It was my church’s women’s fellowship barbecue and, being new to the area and all, I really wanted to go.  Attendees were supposed to bring their own meat to grill and something to share.  First issue: I thought it was pretty silly to go to the store to buy meat and, more than likely, a roll, for a single person.  I don’t have hamburgers (or turkey burgers, or veggie burgers, or hot dogs) in my freezer waiting for occasions like this.  Nor do I want to.  So I agonized over whether to go to the store so I would have something for the grill.  Second issue: Then I debated over what to get-should I get meat? Veggie burgers? Vegetables to grill?  When possible, I don’t like to introduce myself as “Emily the not-quite-but-almost-vegetarian”.  If the conversation gets there then fine, but it’s not the point of my existence.  So, really the whole debate was about what first impression I wanted to make.

In the end, I brought nothing but Mediterranean Salad (and I am getting to the part with the recipe).  I hoped that no one would notice that I hadn’t brought anything for the grill.  Know what?  No one did.  There were so many pasta salads and bean salads and fruit salads and Mexican dips that no one noticed that my full plate didn’t have anything from the grill or any meat.  I had a really good time spending the evening conversing about things other than my eating habits.

What to bring to share was much easier for me to figure out.  I knew right away what I wanted to make.  Last year, before I was really into cooking, I saw Giada De Laurentiis make this Mediterranean Salad on Everyday Italian.  It was a big hit at last night’s get together. 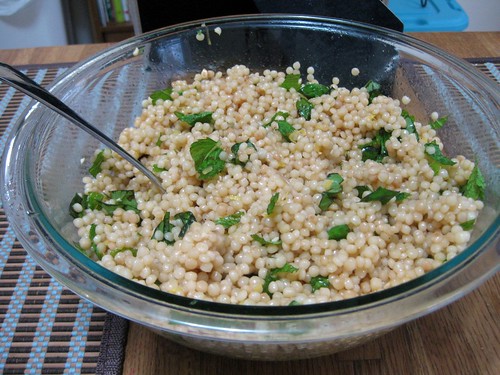 The dish contains Israeli/Mediterranean couscous, which I’ve found at food co-ops and Whole Foods  It’s a small pasta, different from “normal” couscous.  The recipe says any small pasta will work, but I’ve been so happy with the couscous that I’ve never tried it.  Add in some broth,* garlic, lemon juice and zest, fresh mint, fresh basil and dried cranberries and it’s a delicious side salad (or meal, if I have my way).  Check it out.

*Switch out the chicken broth for vegetable broth and this dish is vegetarian.

Potato Pancakes
Chopped
Have I Made This Before?
Another Experiment: Tortilla and Bean Torte
Did you enjoy this post? Share it!
« Foodies, Dr. Horrible, Portland and Books: Highlights from My Reader
Chilled Tomato Soup with Tarragon Sour Cream »