I love hanging out at farmer’s markets, though I don’t often make the time.  Unfortunately, this past Saturday was not a nice day for hanging out at the farmer’s market.  The Pittsfield Farmers Market was cold and cloudy and looked like it was going to rain at any moment.  The vendors wore pea coats and heavy sweatshirts and grasped cups of coffee in their hands.  But it was alright, because it was also the day of the long awaited (for me) preserve swap hosted by Berkshire Barter. 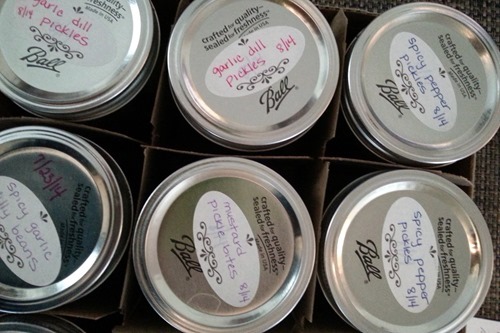 This wasn’t a banner year for me in terms of canning.  I made pickles and I made dilly beans.  I have good intentions to maybe, if I’m super lucky, still do something with tomatoes and, hopefully, put up some apples.  But when it came time to choose what to bring to the event, I didn’t have a lot of options.  I also had no idea how many people would be coming.  30 had replied positively on Facebook, but we all know that Facebook RSVPs are notoriously unreliable.  I settled on bringing 6 jars of cucumber pickles and 3 jars of dilly beans. 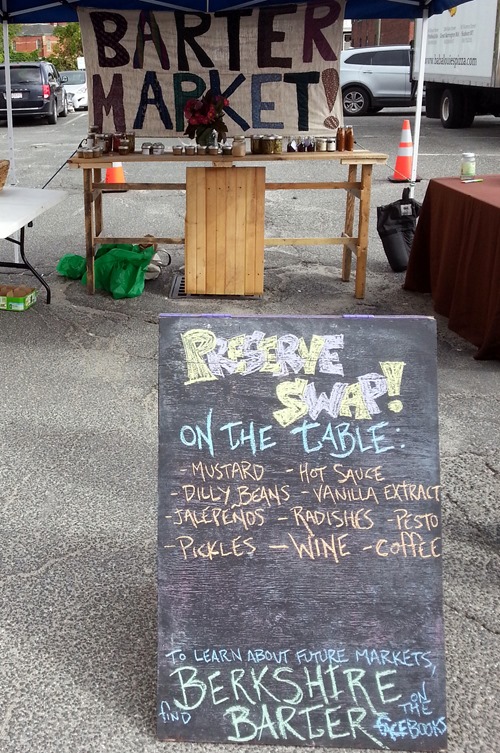 Also in the “things Emily was indecisive” category on Saturday was what time I should leave for the event.  According to Facebook (what did we do before Facebook?), the table would be set up around 9 and the swap would happen around 11.  I ended up arriving at the market around 9:30, so early that the table was just being set up.  I met Michael, a Berkshire Barter member who was more or less running the swap, added my pickles to the table and wandered the market. 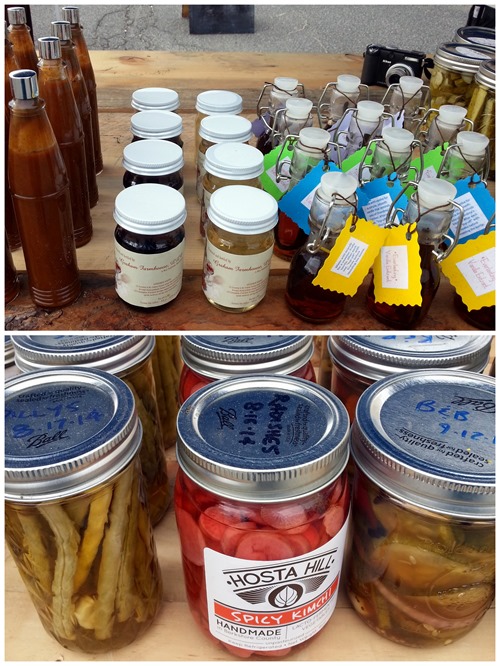 As the morning progressed, the swap table became filled with more and more awesome looking goods.  It was really great to meet all the contributors and chat with them.  By the time Michael told us we could begin there were various pickled and lacto-fermented items, vanilla extract, chicken and duck eggs, wine from Graham Farmhouse, hot sauce, kombucha, mustard, barbecue sauce,  pesto, jam, and coffee beans from Assembly Coffee Roasters.  It was quite a spread and it was fun to see market shoppers stop by to see what the event was all about.

Around 11, we were given the okay by Michael and began swapping goods.  The instructions were pretty casual;  we were to trade things at a ratio that made sense to us.  I’m pretty sure everyone did 1 for 1, but there was the option to do otherwise.  I always worry that my goods will be the last ones picked and I was pleased to find that some people actually wanted my pickles.   In the end, I took home a jar of blackberry/blueberry jam, barbecue sauce, rum vanilla extract, picked radishes, pear sauce, mustard and coffee beans…and 3 jars of my pickled goods, but I’m okay with that.  I had such a good time meeting everyone and spending my morning at the market.  There’s the promise of another swap later this fall and I’m definitely following the Berkshire Barter Facebook posts for upcoming events.

Scenes From Blueberry Picking 2015
Mixed Results
A Night at Rub Bourbon and Barbecue
Sunday at the Holiday Farmers’ Market
Did you enjoy this post? Share it!
« On Lacking Time (CSA Menu Plan #11)
Taking the Night Off »

After months of good intentions, I finally got aro

Happy first day of spring! It actually felt like s

When @wholefully announced their new #MakeItWholef