In September, I discovered the Whole Grain Council’s “grain of the month” calendar and have been trying out a new grain each month since then, just because I needed to add another goal to my life.

December’s Grain of the Month was buckwheat, a grain which I have very little experience with.  I checked out the recipes on the Whole Grain Council website, but nothing really grabbed me.  I looked around online and saw a lot of recipes for buckwheat pancakes, but since I made teff crepes last month I figured it’d be more fun to try something different.

Somehow I discovered that Soba noodles are made of buckwheat and, right around that time, Julie posted a recipe for Soba Noodle Soup.  Perfect! I’m always up for soup and this recipe seemed especially simple.  The soba noodles I purchased were only 30% buckwheat and 70% spring wheat, but I deemed them sufficient for my purposes.

The soup was as simple and tasty as I’d hoped. I made a half batch of Julie’s recipe, which was really simple to do, and used frozen sugar snap peas that I’d defrosted in the microwave. All of the other ingredients (vegetable stock, soy sauce, garlic, rice vinegar and sesame oil) I already had on hand. 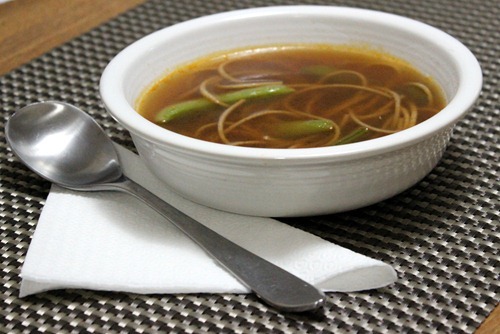 All that to say, this recipe is going to go into the regular rotation. The buckwheat noodles reminded Brian and I of al dente whole wheat pasta, which is our usual pasta of choice. For that reason, it might not appeal to some people but we really liked it.  It will be perfect for those busy days when there’s not much time to cook something else.

I couldn’t be satisfied with just one buckwheat experience, so I also attempted making hot buckwheat cereal.  Twice.  It did not turn out as well as the soup.

I purchased some buckwheat groats from the bulk bin at our local co-op and followed Courtney’s suggestions in “An Ode to Buckwheat Bowls”. Because I’m lazy, I used the microwave instructions.  The result was a bowl full of hot milk with pieces of buckwheat floating in it.  The smell of the vanilla extract was almost overpowering.  For some bizarre reason, I ate a decent amount of it, knowing full well that what I had made was not at all what a buckwheat bowl was supposed to look like.

My second attempt involved following the 3rd, 4th and 5th steps of these directions which did result in something that actually looked like hot cereal: 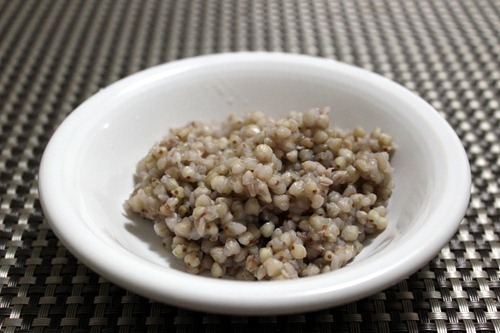 (If this does not look very appetizing to you, I understand. But it was a vast improvement over my first batch.)

Unfortunately, Brian and I both agreed that it still didn’t taste very good.  I didn’t toast the buckwheat, which may be the problem, but I haven’t been in any hurry to make another attempt.  I’m just not sure that I’m going to become a buckwheat cereal lover (sorry Courtney!).

So, to summarize: soba noodles are my cup of tea…or soup, rather.  Buckwheat groats, not so much.

Next month: oats.  Thank goodness for a month that features a grain that I’m already a fan of!