Though we were both in attendance at the 2011 Healthy Living Summit in Philadelphia, I didn’t really get to know Gretchen Powell of Honey, I Shrunk the Gretchen until the 2012 Summit.  It was there that I attended her session on blog photography and got some much needed one-on-one help regarding how to use my DSLR.

Following the summit, I began reading Gretchen’s blog regularly.  I was thrilled when she turned up again at this year’s summit, as part of the “Blog to Job: Utilizing Your Personal Blog to Elevate Your Career” panel.  Though I have no plans to leave my job, the panel was full of really good information about using your site to impact the rest of your life.  Gretchen largely talked about her job with Yelp, but also discussed her recently published first novel, Terra. 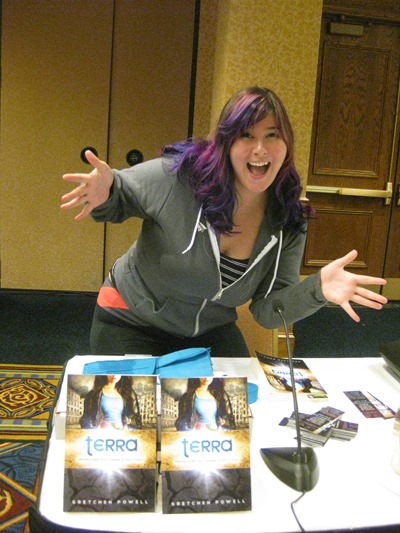 Though I hadn’t yet read Terra, I had read a lot of really great reviews of it.  I was also in awe of the fact that someone I knew had written and self-published a novel.  I would love to publish something someday and Gretchen’s experience makes it seem like that may actually be a possibility someday.  Gretchen hosted an author talk and book signing during the Summit during which time I purchased a copy of the first volume of her Terrestrials trilogy. 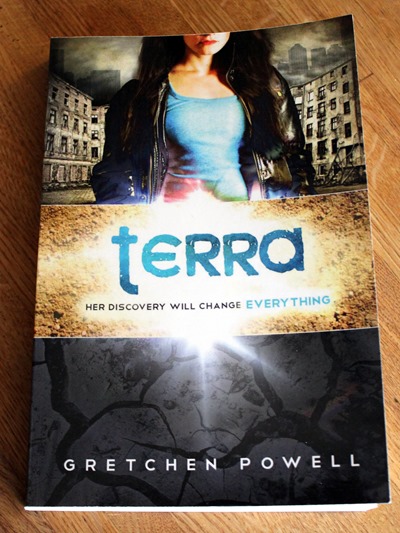 Despite the best of my intentions, I didn’t get around to starting Gretchen’s book until recently.  It’s a dystopian novel, much in the vein of The Hunger Games and I am loving it.  As I’m terrible at describing books and I don’t want to give anything away, here’s the description from Gretchen’s site:

…the book follows protagonist Terra Rhodon through a dystopian future where the planet’s natural resources have been depleted and the rich and powerful have fled to cities in the sky. Eighteen-year-old Terra makes her living as a scav, collecting valuable recyclables to turn in for profit. Terra’s life is changed forever when a routine scavenging run leads her to a discovery that turns her world upside down. From there, she finds herself being rapidly introduced to a world she never knew, as well as to Adam, a boy unlike any she has ever met. But Adam has secrets, and with him by her side, Terra embarks on a journey that leads to an earth-shattering revelation – one that will test the bonds of loyalty, family, and love.

It’s a well known fact that I’m really bad at making time to read, but I’ve definitely been setting aside time to do so with this book. The characters are really intriguing and the way in which Gretchen slowly doles out the details about what’s really going on in the world of the book makes me continue to turn pages long after I should have put it down for the night.  I’m already looking forward to the next two books, though the release dates haven’t been announced yet.

You can read more about Terra…or you can just enter to win a personally autographed copy here! Use the Rafflecopter widget below to submit your entries.