Remember last month when I posted about the Whole Grain Council and their “grains of the month”?  I mentioned in that post that I wanted to try cooking with the suggested grain each month, just to expand my repertoire a bit.  There’s a lot of rice and pasta happening around here and I know there’s a wealth of other grains to choose from.

Somehow though, I keep neglecting my grain posts.  I didn’t do one in September and now it’s the very last day of October.  Once again, getting things done at the last minute.  But they are getting done!

October’s grain is corn.  Initially, I struggled with this a bit, even though corn isn’t exotic or anything.  Often the corn we consume is from the freezer and served as a side dish.  But the more I thought about it, the more I realized that corn makes other appearances in my kitchen as well.

My 3 favorite ways to serve corn:

It’s quick, it’s easy, it can be healthy and there’s an infinite number of ways to flavor it.  What’s not to love about popcorn?  We have a jar of kernels in our pantry which I pop on the stove top or in the microwave.  I love popcorn because all long as I keep the seasonings reasonable, I can eat a lot of it and not feel gross.  I’m partial to just a little oil and salt, but cinnamon sugar, butter, dried herbs or chili powder are pretty tasty too. 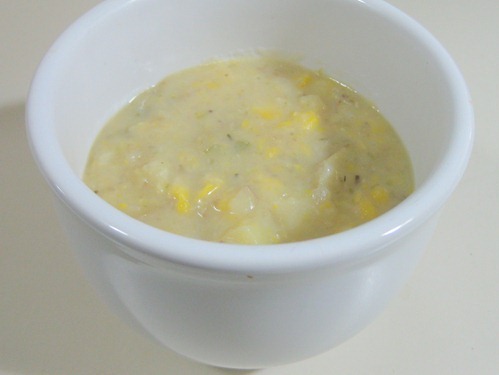 Many of the soups I make utilize corn.  I’m a really big fan of Nicole’s Potato and Corn Chowder (seen above), which I just made again last week.  The recipe is no longer on her site, Another One Bites the Crust, but she’s wonderful and gave me permission to reprint it for you here.  The recipe is easy to follow and results in a vegetarian soup that’s thick,  hearty and delicious.  The corn makes it just a little bit sweet.

Potato and Corn Chowder
4 to 6 servings

First, sauté the onion, bell pepper, and garlic until softened.  After the vegetables are soft, add in the potatoes, corn, vegetable stock, soymilk, and herbs/spices.  Bring to a boil, cover, and then lower to a simmer and cook through until the potatoes are tender.  We used the immersion blender to break down the potato chunks and create a creamier texture.  It was a great idea- before I decided to pull the immersion blender from the pot before it was done spinning.  Piping hot soup all over the kitchen, including my bare arms.  Ouch!  Oh!  Make sure you pull out the bay leaves before blending.

Anyway, my mom is trying to cut back her sodium intake, so we didn’t add salt, but I think it’d be even better with some!  Adjust the spices to your tastes and serve!

I hope you enjoy Nicole’s soup as much as I do! 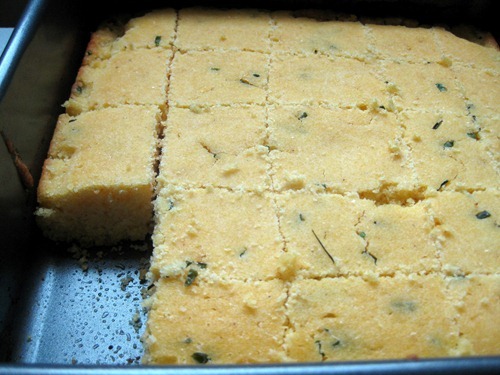 It’s not usual for me to whip together a batch of cornbread or corn muffins when I’m making chili or something else spicy.  My go-to recipe is from Mark Bittman’s How to Cook Everything Vegetarian (you can even make it without eggs!), but I’m also a big fan of these sesame corn muffins from Herbivoracious.  They’re simple to make and easy to transport.  The crunch of the sesame seeds adds a really fun texture.

Next month’s grains are millet and teff, which I have zero experience with.  Stay tuned to see how that goes! (I’m totally open to suggestions if you’ve got them.)

Caper Capers (or, "Adventures in Pasta")
The Other Clam Chowder
New Adventures: The Best Recipes I Tried In Februa...
Striped Eggplant, Tomato and Cheese
Did you enjoy this post? Share it!
« Highlights: Halloween for Foodies
Goals in Progress: October »