At this point in the CSA season I’m desperate to do something new and different with the root vegetables we’ve been picking up since November.  I am so ready for spring greens.  Celery Root, or celeriac, is a strange vegetable, and whose uses aren’t immediately obvious.  We’ve had good success with roasting it, but my favorite use for anything this time of year is still soup.  I’d made the Creamy Celery Root Soup from Serious Eats before, but the texture was a little strange for me–nothing my immersion blender couldn’t fix! (Seriously: if you haven’t bought one yet, you should really look into it).

My Creamy Celeriac Soup is not difficult to put together.  If you can chop vegetables, heat broth and use a blender, you’ll be good to go.  For me, it’s an easy weeknight dinner.  This soup walks the line between thick and thin, but the pureed potatoes and celeriac help thicken it up.  The addition of dried tarragon makes this soup what it is, so don’t leave it out.  My version is vegan, but feel free to make it even creamier by drizzling in some heavy cream, half and half or milk. 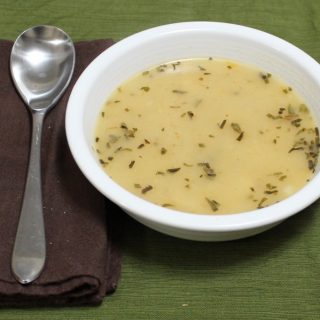