On Sunday, Brian and I ran our second 5k of the season, in downtown Adams, Massachusetts. The Dash for Dana is a memorial race in honor of a local teen who died in a car accident in 2010.  I was excited about the location of the race and the route, which was a fairly flat (as far as the northern Berkshires is concerned) out and back through commercial and residential areas of the town.  The race began at 8:30,  good when the race is in August.  Despite the fact that it could’ve been really hot out, we were blessed with temperatures in the high-60s.  It was was a small race, maybe 75 runners, but I like small races.  We arrived at the Adams Visitors Center around 8:20, grabbed our t-shirts and race bibs and got ready to run. 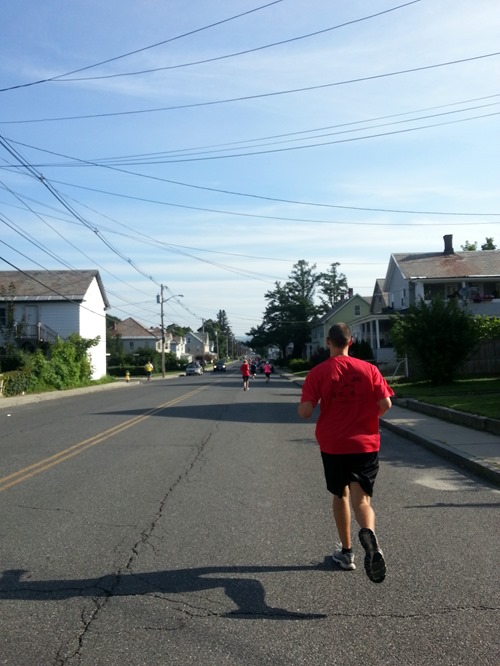 For this race there were no time chips, but they did have a time clock at the end (as opposed to the Humane Race 5k I ran in May).  At the starting line, Brian mentioned to me that his goal was to run/jog the whole thing without stopping.  Without much thought (or endurance training), I joined him.  And I kept pace until the water break at the 1.5 mile mark, when I took a break for a drink and he kept running.  After that, I kept a pretty good pace, but I ran alone.  It seemed like I was pretty much in the middle of the pack, which I’m totally happy with.  I tried to find other runners who were maintaining a pace similar to mine and follow them for pacing, which I’m notoriously bad at.  Overall, it worked well. 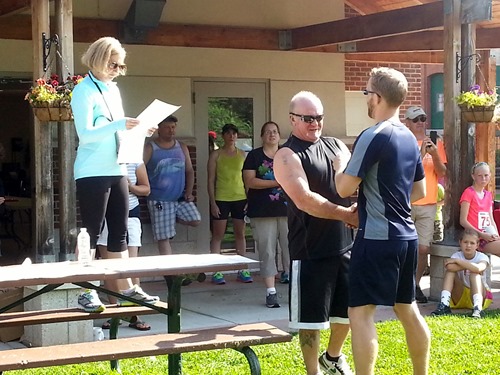 Though I didn’t run the entire race, I did jog far more of the 5k than I ever have before…I only took one other brief walking break in addition to the water station.  I can barely believe it because I usually take a lot of walking breaks.  In the end, the clock read 31:06 when I reached the finish line and Brian finished in 28-plus minutes (we haven’t been able to find official results online).  My pride in myself was matched only by my pride in Brian, who ranked third for his age group.  This accomplishment earned him a lovely Dash for Dana mug.

I really loved this race.  I loved that the location was convenient for me (though a Saturday race would’ve been better), I loved that it started and ended at the visitors center (with real restrooms, chairs and shade), and I loved the positive mood of all the runners.  If my summer schedule cooperates in 2015, I plan on running this one again.

A bit later, I checked out the Adams Farmer’s Market for the first time this season. 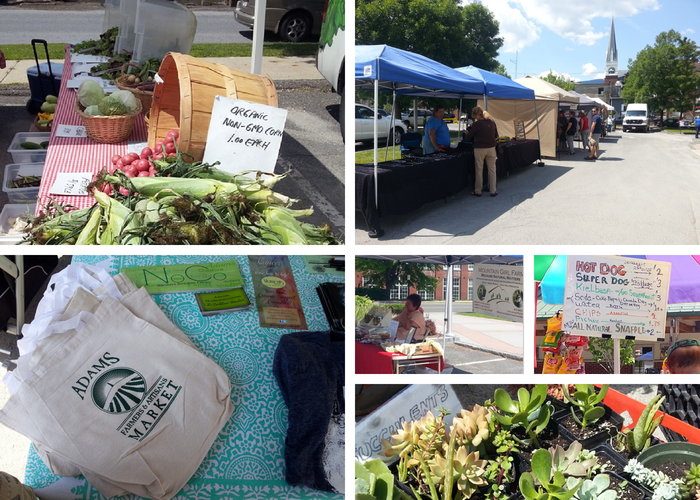 The market looked really great for its second season.  It seemed like there were more vendors than last year and the place had a really good vibe.  There was live music and people buying and selling jewelry, books, produce, crafts, coffee and more.  I stopped by because I needed tomatoes to make Striped Eggplant, Tomato and Cheese; somehow I got out of the market purchasing only 4 tomatoes and a cucumber for my sister who was visiting briefly and had joined me at the market.  As I’ve said, I sometimes skip farmer’s markets due to all our CSA produce, but if I get the chance, I might stop by the Adams market again.