I feel the need to explain what feels to me like the recent influx of Rachael Ray recipe reviews on this blog.  Before I moved, I cut up over a year’s worth of Everyday with Rachael Ray magazines and filed the recipes I actually  wanted to make in my recipe binder.  Now the majority of the recipes in my binder are from Rachael.  Though after last night, I’m less enthused about trying them.

Last night’s pick (because I have to keep my Man happy by serving meat once in a while…oh, and I like meat, too) was a 5 ingredient recipe for Coconut Curry Chicken.  We both like coconut and curry, it sounded simple enough and so I opted to give it a try.  It wasn’t difficult to make, and it looked pretty: 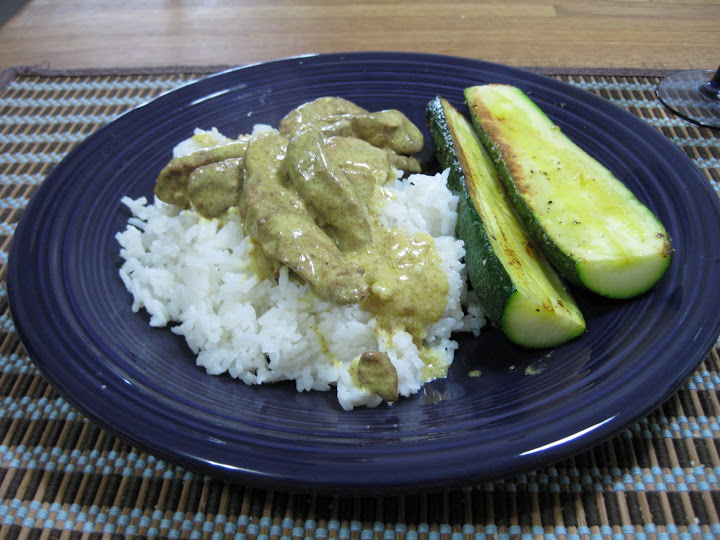 The taste, however, was lacking.  By which I mean, it didn’t really have any taste.  I know, it seems odd to say that a curry dish could have no taste, but my Man will back me up on this.  It’s not that it was bad, per se, it just wasn’t good.   It didn’t taste like curry.  It didn’t taste like coconut.  The recipe has 5 rave reviews, so either they’re crazy or I did something wrong (and despite a recent series of kitchen mistakes on my part, I think I made this one correctly).

We’ll be eating it again tonight, because there are still two servings left, but I don’t think I’ll be making this recipe again.  Definitely going to search for a relatively simple, delicious curry recipe for the future.

“What’s the Point of Vegan Brownies?&#...
Recommended Recipe: Curry Tofu Tacos With Pintos &...
Fun with Garlic Scapes
Breaking the Rules
Did you enjoy this post? Share it!
« Tetrazzini…or something like it…
Time Flies When You’re Having Fun »