Last week I made applesauce in my crockpot and discovered a new obession: hot applesauce.  I don’t know why it never occured to me before to heat my applesauce in the microwave before consuming, but I’m convinced it’s the ultimate fall snack.

The applesauce was such a hit and canning’s been so much fun that last weekend Brian and I decided to make some applesauce to can.  Please note that, prior to this weekend, we’d sucessfully canned green beans, pear ginger preserves, peach butter, summer squash pickles and apple rings.   Applesauce is so simple to make, what could go wrong?

We made the sauce, put it in the jars and processed the jars.  As soon as I opened the canner to remove the jars to cool, I knew there was a problem.  The water didn’t look as clear as it’s supposed to.  One by one, we pulled the jars from the water.  Immediately upon setting them on the table, they began leaking applesauce.  Every single jar. 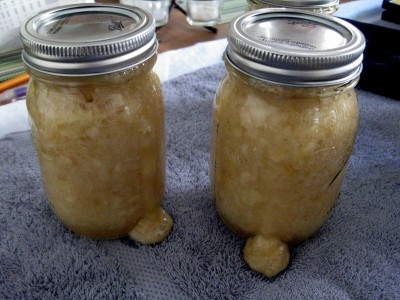 Obviously, it’s not a matter of a bad seal, because every jar leaked.  Futhermore, the applesauce really separated (we left it kind of chunky…because we like it that way). 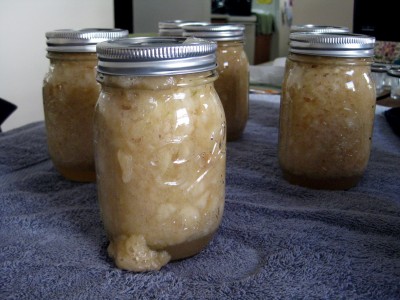 So, friends with canning experience, what did we do wrong?  We left plenty of headspace and have never had this problem before.  I’d love to actually can some applesauce before the season is over!

More Adventures in Canning
Making Up For Lost Time
Scenes From Blueberry Picking 2015
The Cabbage of Wrath
Did you enjoy this post? Share it!
« Highlights: Apples
Recipe Binders »