As I’ve alluded to several times over the past few weeks, I’ve been baking all of my own bread since the beginning of this year.  What started as a little experiment has now become a point of pride that I refuse to backslide on.  Whenever I mention this hobby to someone, when they’re done rolling their eyes and reminding me that one can buy loaves of bread at the supermarket, they start asking questions.  It seemed like high time I answered them here.

FAQ About My Bread Baking*

How did you get started baking bread?

I think the first loaf of bread I made that wasn’t a quick bread was this no-time bread from The Kitchn, which is still pretty quick.  I stuck with that loaf for probably a year, it was so darn convenient.  When I started my self-imposed Grain of the Month challenge in 2011, it quickly became clear that the best use for some of the grains was bread.  Throughout that year I made several loaves of bread, including oat and rye.

Why did you embark on this project?

At the beginning of the year, in my post on intentionality for 2013, I mentioned “buying products because I agree with them, not because they’re convenient”.  I felt like I had gotten rather sloppy about what I was choosing to buy and I wanted to get back in the habit of making things from scratch.  In mid-January I wrote a post about baking bread and my experience thus far.  It’s fun to read what’s changed and what hasn’t.  I’m going to provide a lot more detail here, but many themes from that post will be repeated. 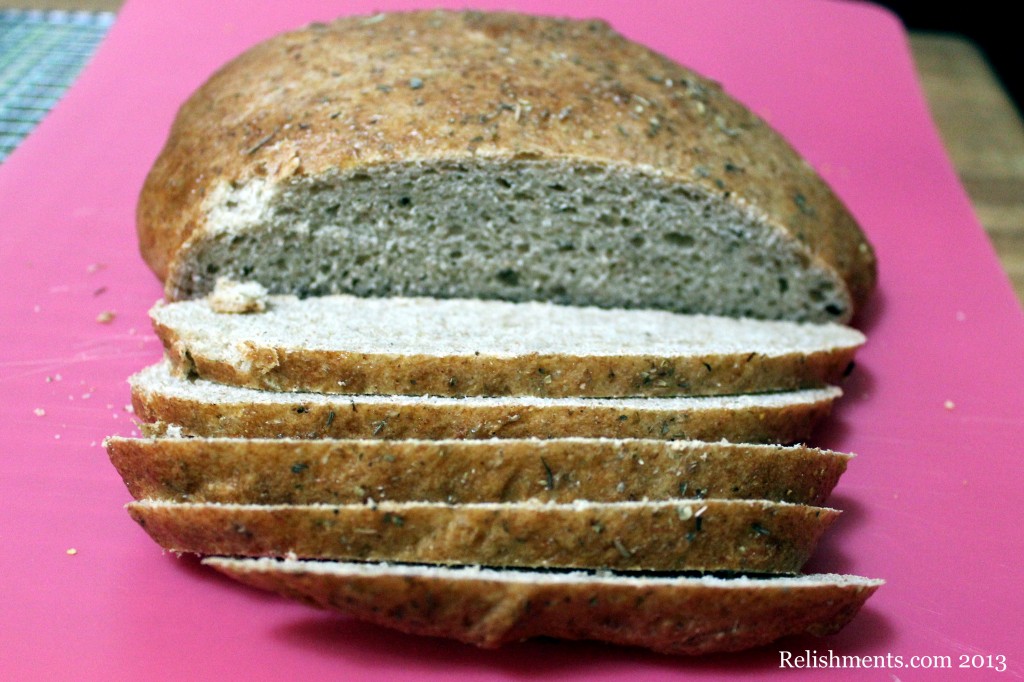 How do you make time for that?

First of all, it should be noted that Brian and I consume less bread than a lot of people.  I eat it pretty regularly for breakfast, but we don’t eat sandwiches routinely for lunch and we have no kids.  So a loaf of bread generally lasts us a week, sometimes more.  Whenever I bake bread I make two loafs, sometimes more.

But yes, it is a time consuming project.  As with many things, the more you do it the more manageable it seems.  I generally try to bake on a free weekend morning or afternoon. There is the occasional panic (like at the end of this week) when I realize I don’t have any empty mornings or afternoons in which to bake bread and get a little freaked out.  But when something is important to you, you make time for it.

Part of the way I get away with not constantly baking is storage. Since I bake more than one loaf at a time, I generally only have to bake every 2-3 weeks.   When cooled, both loaves get sliced and one goes into a zip top bag and is frozen.  When the supply in the fridge is running low, we take some out of the freezer.  If we need bread and all we have is frozen, a quick run through the toaster generally makes it ready to eat.  I keep an eye on the supply and when it starts running low I start checking out the calendar for a time when I’ll have a few hours to bake.  The nice thing about bread, however, is that even though it takes a long time that time isn’t labor intensive and you can do a lot of non-bread related tasks during the rising and baking phases.

Do you use a stand mixer? (via my brother in law)/ But what about the kneading?!

Sometimes I use a stand mixer.  Some recipes have mixer variations and if it’s an option I absolutely use it. Currently my recipe of choice (linked below) only provides kneading directions.  When I tried it in the stand mixer the dough seemed way too wet.  I’ve come to find that the process of kneading really isn’t that bad.  I’m sure I’m bad at it (I may even be doing it wrong), but as long as I get a loaf of bread at the end, it’s worth it.  Plus kneading is good exercise. 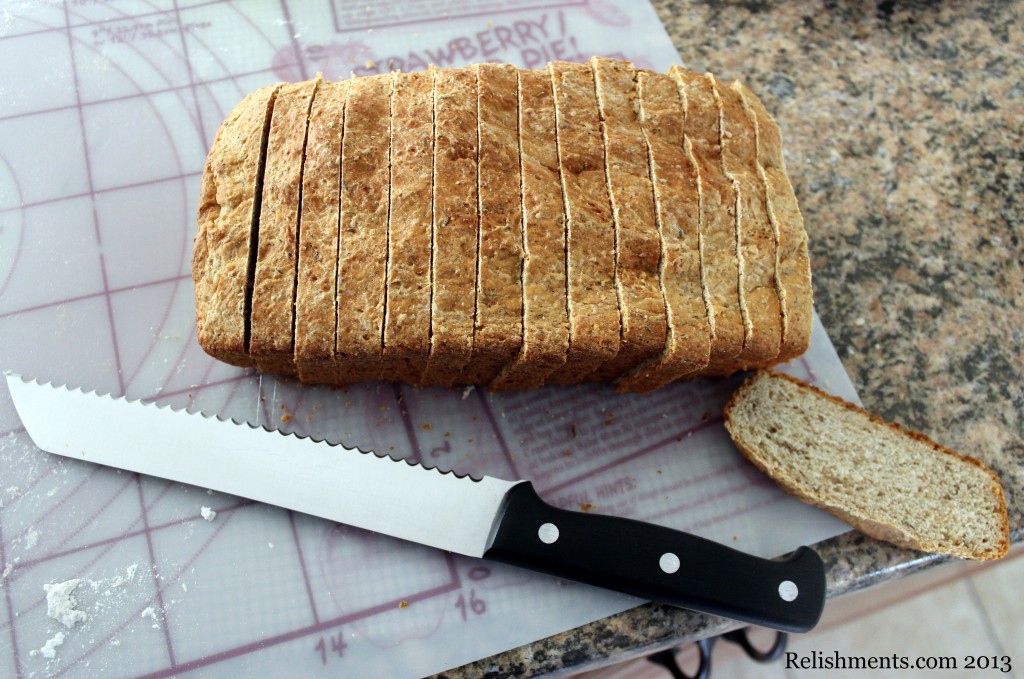 How do you keep the yeast from dying? / How do you know when it’s done rising? (via my friend Emily)

I have been incredibly lucky with my yeast.  I use basic supermarket yeast, like Fleischmann’s or Red Star, which I store in the fridge.  I don’t take the temperature of my water or other liquids, I just use my fingers to test whether it’s warm.  In the winter I almost always turn my oven to warm and rise my dough on top of it.  Most modern recipes give specific times and/or sizes (doubled in size, etc).  I follow those guidelines and generally things work out.  I have had a few loaves that didn’t rise much at all, especially before I figured out that my apartment was too cold in the winter, but even flat bread still tastes pretty good.

What recipe do you use?

I’ve used several different recipes in my bread baking journey.  In addition to the oat and rye recipes I linked above, I’ve also had success with the following:

My current go-to recipe is Jennifer’s Sandwich Bread and Rolls from From Scratch Club.  I’ve probably made this recipe a half dozen times or so.  I love it because the bread has really great texture; its not as soft as some recipes I’ve made and it makes amazing toast.  In addition, one batch of this recipe makes 2 loaves and 10 rolls.  Or 30 rolls.  Or 3 loaves.  Or 1 loaf and 20 rolls, depending on how you want to use the dough.  The rolls have come out well every time and it’s nice to take care of the need to purchase those at the same time as loaves of bread. 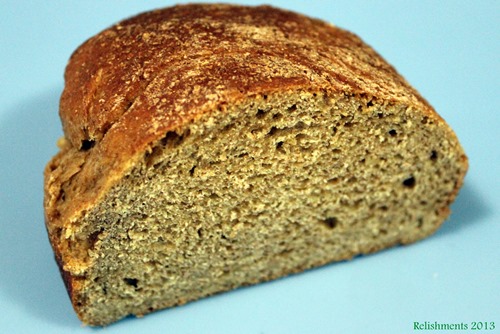 Where does the motivation come form?

Stubbornness, I think.  And sometimes this is where my motivation starts and ends.  Though I haven’t bought a loaf of bread since January, I have bought bagels, rolls and English muffins.  And sometimes I don’t get blog posts written.  And I haven’t gone for a run in a million years.  My motivation is very selective.

What’s easiest for people short on time? (via @lisafine)

One of the keys to good bread is the amount of air inside.  Some loaves have more than others, but it’s sort of what makes bread bread.  Unfortunately, rising takes time.  Keep in mind what I wrote about making time, however.  The no-time bread I started out with is pretty good in a pinch, but I haven’t come across any other quick recipes.  The Kitchn just posted a recipe for making bread in the slow cooker, but I’m a little skeptical about how much time it really saves and how well it would turn out. 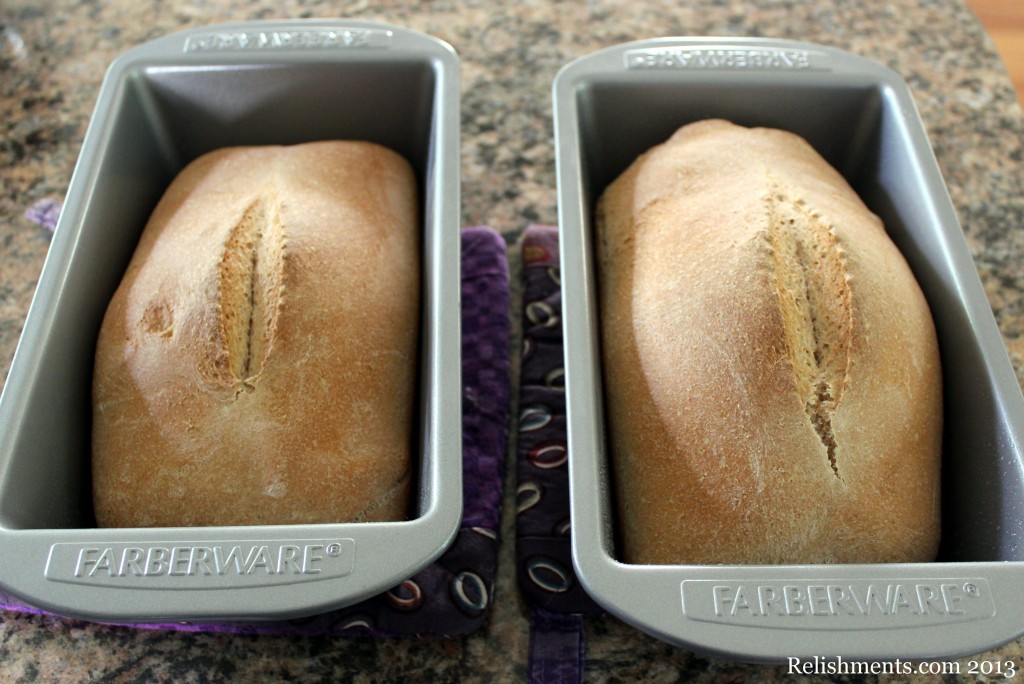 What’s next? / Did you try sourdough bread at all? Planning to? (via @lisafine)

As happy as I am with the bread I’ve made, its not perfect.  The loaves I’ve made have a very high white flour content.  On one hand that’s awesome because I can buy ten pounds at a time at BJ’s for a really reasonable price, but I’d really like to increase the amount of whole grains.

I also want to experiment, at some point, with sourdough and other starters.  I’m currently reading Cooked by Michael Pollan and his entire discussion of bread is about sourdough.  In addition, I want to try some of the recipes in the Amy’s Bread cookbook, but the majority of those also use starters.  Starters are an entire additional level of time and effort commitment, so we’ll see when I get the motivation to actually try it.

Regardless of the kind of bread I make, I really want to get a chest freezer as well.  It would be awesome to have a variety of breads on hand and bake several loaves at once, thus extending the amount of time between days I have to bake.  Of course, that’s one of many many house improvements we’re looking at.

*Some of these questions actually are frequently asked.  Some of them are just questions I wanted to answer, even though no one has asked them.

Meals in a Pinch
Rye Bread Baking
Baking, Take 2
Nutella Chameleon Cold Brew Coffee Brownies &...
Did you enjoy this post? Share it!
« The Time My Sister Gave Me a Kale Recipe
TECH: 7 Reasons Why My Laptop Doesn’t Come to HLS »