Though I’d been in Chicago since Wednesday, Friday was the first official Healthy Living Summit event I attended: a tour of the Frito-Lay Plant in Beloit, Wisconsin.  We boarded a charter bus at 9:20 in the morning and headed out.  The bus ride was supposed to be a couple hours, but Caitlin had come prepared with the game Catch Phrase.  When I wasn’t playing, I got to meet a whole bunch of awesome bloggers including Krista, Lisa, Sean and Heather. 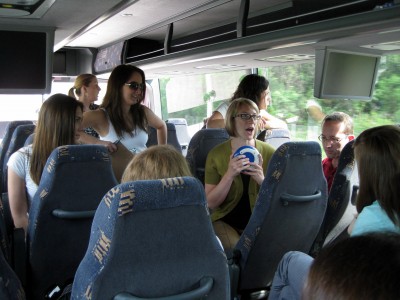 After 3 hours on the bus (our driver got a little lost), we arrived at the plant and split into 2 groups.  First we all heard a presentation about the changes that FritoLay’s Beloit plant has made to make their factory more ecologically friendly, as well as the many awards they have won for doing so.  It was definitely interesting, and made me feel a little better about big food companies. 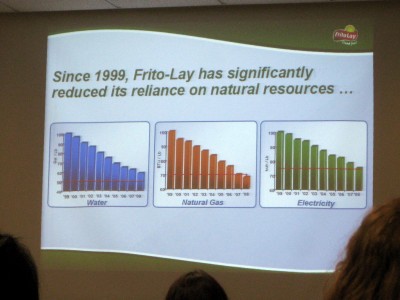 My group toured the plant first.  The lovely folks from Ketchum (Frito-Lay’s Public Relations) took a ton of awesome photos for us (we weren’t allowed to bring cameras).  I thought I slide show might be slightly less overwhelming:

We started out the tour by donning safety goggles, earplugs and hairnets, as well as using lint rollers and walking through an air shower.  This was no ordinary “factory tour”-we were on the floor of the plant, meeting employees, checking out the equipment and tasting chips right off the line.  It was really cool; who doesn’t like to see things being made?

After our tour, we headed to lunch.  One of the best things about the Healthy Living Summit was knowing that the food was always going to be good.  Clearly, this was no exception. 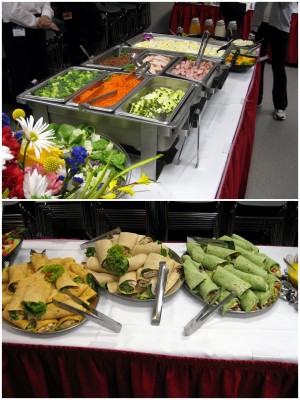 As we ate, we enjoyed another presentation about the nutrition of Frito-Lay products from Kate Wilson, a RD who works for Frito-Lay.  It was really fascinating to hear about all the changes they’ve made to their products.  Frito-Lay regular potato chips only have 3 ingredients: potatoes, oil and salt.  Also, the amount of sodium in many Frito-Lay products aren’t as high as we often assume.  Click the second image to enlarge the slide featuring sodium levels in common snacks and foods. 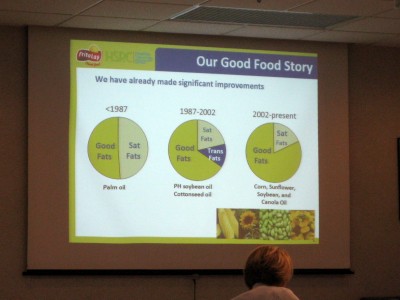 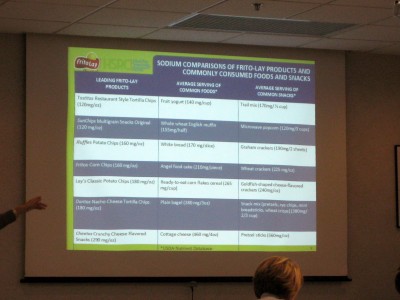 All that said (and the presentations were fairly persuasive), I feel better about eating Frito-Lay products, but know that they’re still not the world’s perfect snack food.  Big food companies may be doing a lot of good, but they’re also doing a lot of damage.  There was much discussion about why the Healthy Living summit was checking out Frito-Lay, both before and after the tour.  Heather wrote an excellent post on her blog,  “Side of Sneakers”, which details more about the information in the presentations.

I feel less guilty about eating the occasional potato chip now, which is good, because we all left the Frito-Lay plant with a big bag of free Frito-Lay products. 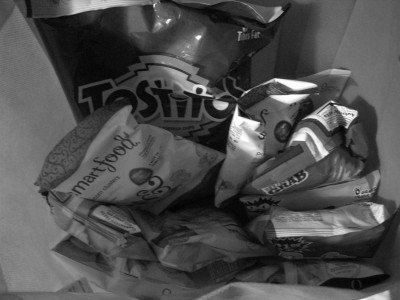 We left the plant and headed back to Chicago on the bus.  Again, the 2 hour trip was lengthened, this time due to Chicago traffic.  Someone had the genius idea to convince the bus driver and the Ketchum people to drop us off at an L stop so we could take the subway into the city.  I’ll let you imagine what over 20 people with big red bags full of chips running through the train station looked like.  Somehow, we all made it onto the crowded subway and back to the hotel by 6.  6:00 was, of course, the time the cocktail party (and official HLS kickoff) was supposed to start.  I quickly changed my clothes and headed out the door.

The OpenSky sponsored Cocktail Party was fun. Most of the HLS attendees were there and I spent the evening introducing myself to lots of people, both total strangers and bloggers I regularly read. It was a little hot and crowded, and the music a bit too loud for real networking, but I enjoyed myself. The photographer from Oroweat and Arnold Bread (another sponsor of HLS) took amazing photos, imbedded below. I really like the one of me and my roommate, Nicole (the second picture in the slide show).

I headed back to the hotel around 9 pm, in a cab with 5 other girls (apparently Chicago cabbies don’t care).  It was a bit of an early night, but the official summit was the next day and I wanted to be well rested.