A couple weeks ago, I had the pleasure of meeting up with Heather for lunch.  In addition to yummy food and a nice break from the hardcore shopping that Brian and I were in the midst of, Heather and I had an awesome conversation about blogging and blogs in general.  If you ever want to have a conversation that really makes you think, I suggest you schedule lunch with her.

Heather mentioned that she’s reducing the number of blogs she subscribes to via Google Reader to 28.  Mind=blown.  There was no way I could reduce my Reader to that few. But then I was unable to stop thinking about the way I use Reader and how I might change that.

First, some background about Google Reader and how I use it.  Reader is a RSS feed aggregator that brings all the content from my favorite blogs to one place.  Despite the theory held by many that blogs are meant to be read on their actual sites and not in readers, I read almost all the blogs I follow using Reader.  I only go to the actual sites to in order to leave comments.  I look at all the titles of the posts in my Reader in collapsed view, star the ones I want to come back to, mark everything as read and, when I’ve got time, click on "starred items" and then read the posts I actually want to read.  This method allows me to sort out a lot of the stuff I don’t care about, such as a NY Times recipe for beef brisket, which I’ll probably never make.  On the day that Heather and I talked, I had over 200 blog feeds coming into my Reader. How did I manage to not get completely overwhelmed? Well, I didn’t, really. My Reader was a constant source of stress.  I spent the better part of last summer trying to get to the bottom of my starred posts and, though I was successful and have generally kept it that way since, I’m constantly looking to see if I have new posts and trying to get time to sort through the influx, leave comments, save recipes, get links for Highlights posts and find inspiration for Relishments. 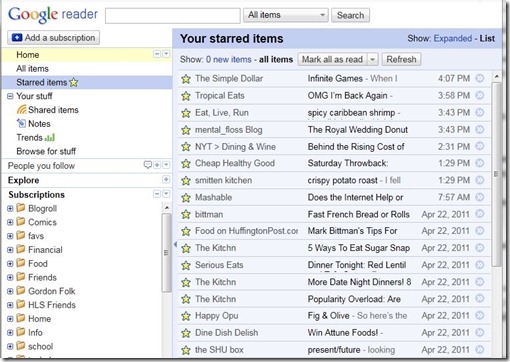 An actual screenshot of my actual starred items

Heather’s idea about slimming down her blog intake resulted in the following observations on my part:

Still, I felt a little nervous.  Reducing my intake too much would have a serious affect on the Highlights, which I really do like writing.  I didn’t want to miss anything.  There are a million great blogs out there.  My interests keep widening (decorating blogs, teaching blogs, friends blogs) and I want to keep a diverse collection…

Nevertheless, my talk with Heather convinced me that I was probably overindulging.  So, I did a bit of a subscription purge.  I got rid of 16 currently posting blogs from my unread items right off the bat.  The initial purge contained news aggregate blogs that were mostly repeats of info I’d already gotten elsewhere, several couponing blogs, some company and product status blogs, a couple food blogs that rarely posted recipes that interested me, comics I no longer follow and humor blogs that aren’t funny.   Then I went into my subscriptions settings and deleted all the blogs that haven’t posted in forever and/or had little interest to me.

When I was done, my blog subscriptions were down to 134.  Still a lot, but much much better than it was.  In the couple of weeks since I’ve made the change, I’ve also made some mental changes.  I’ve tried to put posting first, followed closely by leaving thoughtful comments on interesting posts.  I’ve also felt a lot less stressed about the state of my Reader.  There’s nothing wrong with not reading every single post someone writes; there’s nothing wrong with ignoring posts.  It’s okay if it takes a few days to get to the bottom of my starred items.  I’d rather be creating my own content or doing something else with my time than trying to stem the tide of new posts.  Thanks, Heather, for helping me get out from under my Reader.

PS.  Even if you’re not suffering from a Google Reader addiction, you’ve probably got some silly thing eating your time.  Matt just wrote a great piece on No Meat Athlete that ties right in to all this (he must have been reading my mind!): You Have All the Time You Need: How to Find an Extra Hour and Start Something Awesome Today.

Denny’s, M&Ms and Grocery Shopping: High...
For the Pumpkin Obsessed: Recipe Links
Highlights: Blogs that Inspire
Welcome to the New and Improved Relishments!
Did you enjoy this post? Share it!
« The Good, the Bad and the Ugly
Highlights: The Farmer’s Market »

My favorite girl and I ventured to @mountainviewfa

It's that time of year again! This morning I potte

After months of good intentions, I finally got aro

Happy first day of spring! It actually felt like s

When @wholefully announced their new #MakeItWholef