Contrary to popular belief, I never set out to be one of those people who eats weird food.  Healthier food, maybe.  Homemade food, definitely.  But I’m not really interested in being known for my strange food choices.  In fact, I tend to shy away from trendy ingredients.  So, while a lot of other healthy living bloggers are writing about chia seeds and flax seeds and green monster smoothies, I’m still making pasta with tomato sauce.

But no one has a perfect track record.  And so here is my confession: I’m really into nutritional yeast.

This is the part of the post where, for the sake of about half my readers, I explain what nutritional yeast is.  Nutritional yeast is a deactivated yeast that vegetarians and vegans (and people like me) use as a condiment or ingredient, most notably for making a vegan cheese substitute.  As someone who’s not even vegetarian (again, contrary to popular belief), I’ve always sworn that I’d never go for substitutes when the real thing was perfect.  There would be no fake cheese, fake butter or fake sugar in my life.

But I’d seen nutritional yeast mentioned on a few blogs so about a year ago, I bought some to sprinkle on meals that ordinarily would get a treatment of parmesan cheese.  It tasted good, but I didn’t have plans to take it any further than that.  But, like all my plans, things changed.  This summer, I stumbled upon Mama Pea’s Yukon Gold White Bean Basil Burgers and wanted to try them out.  I didn’t have the nutritional yeast called in the recipe, so I contacted Cynthia and asked if she had any to spare (it’s so awesome to have local blogger friends).  She promptly provided me with a 5 cup container full of flakes.  Quite a bit more than I needed. 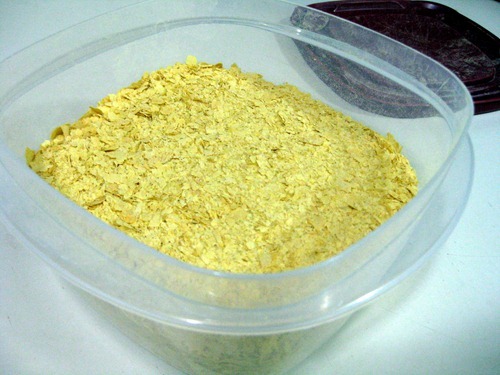 (this was more full when Cynthia gave it to me…)
The burgers were really good and I was instantly interested in seeing what else I could make with the “fake cheese,” especially since I had a ton of it.  At that time, Mama Pea’s Mmmm sauce was getting a lot of play on some of the blogs I read (apparently this whole thing is Mama Pea’s fault).  So we tried it out.  And it totally lived up to the hype.  It’s not a “cheese” sauce, exactly, the nuts, spices and chickpeas create something unique, flavorful and fabulous.  Plus it’s really easy to make.

Not long after that, we wanted to make Mmmm Sauce to top some vegetables for a side dish.  Too bad I didn’t have all the ingredients.  Enter Nutritional Yeast Cheese Dip/Sauce from VegWeb.com.  Granted, I immediately de-veganized it by using regular butter, but it was delicious and surprisingly similar to real cheese.  Maybe decent vegan cheese is possible after all?

Last night I decided to try yet another recipe with the delicious and nutritious yellow flakes.  Angela’s Butternut Squash Mac ‘n Cheeze was awesome, though the squash made it a less cheesy than the sauce mentioned above.  The recipe was fairly simple and I loved using the squash to supply texture, flavor and color to the meal. 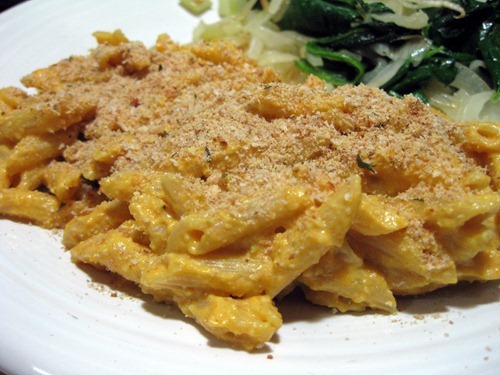 Did I mention that nutritional yeast has protein and vitamins, is low fat and sodium and is free of sugar, dairy, and gluten? (source) But don’t worry, I won’t be giving up cheese or going vegan anytime soon.  What I will be doing is seeing what other creative uses I can find for this yummy ingredient.

To my parents, who are no doubt wondering where they went so wrong, don’t worry.  I’ll bring some nutritional yeast when I visit for Thanksgiving and share it with you.