Holy cow, its April!  We’re a quarter of the way through the year!

This post will not include any April Fool’s jokes because I’m the worst liar ever and no one would believe me.  And I’m just not that creative.  Still, there are plenty of other sites out there pulling off nice tricks:
Caitlin’s Exciting News
Check out Google Motion and Google’s new font.
Serious Eats is launching some new sites

1.  Waste less time
Ehh…why did I put this goal on my list?  It’s so hard to quantify, and even harder to make happen.  I realized this month that my body does not want to do anything between 3 and 6 pm.  By the time dinner is over and the dishes washed, its pretty darn close to time for bed.  I’m trying to reschedule my body to be a little more useful after I get home because I’m getting really stressed out about all the things I want to accomplish (overachiever much?).  Suggestions?

2.  Read a chapter of the bible every day
March wasn’t perfect, but it was definitely better than February.  Reading the Old Testament has been really interesting and daily reading is becoming part of my schedule.

3.  Drink more water
The dry heat of the school is killing my skin, so I’ve upped my intake just to keep my skin from completely disintegrating.

4.  Read at least one book a month
I really want to finish reading John Adams

, but I had trouble finding the motivation to actually sit down and read.  Then The Pioneer Woman: Black Heels to Tractor Wheels–A Love Story

arrived for me at the library and I can’t put it down.  I haven’t finished it yet, but I probably will this weekend, so we can count that for March.  I think my next book will also have to be something really engaging; I’ll save the thinking books for the summer.

5.  Improve my fitness by going to the gym twice a week and doing sit ups and push ups on off days
Oh gym, how I miss you.  I didn’t keep track, but I know I did a poor job of making it to the gym and I’m starting to feel it.  Luckily, Morgan started up the PIPES Challenge and I’m loving it!

6.  Open our home at least once a month
Done!  I’m still thrilled with the fact that I hosted 9 people for dinner!  Brian and I are brainstorming who’s up for April.  Anyone interested?

7.  Give Relishments a makeover
I didn’t do too much that was tangible this month, but I did do a lot of offline work.  I’ve found a new theme I’m really excited to install and developed some ideas for other changes I’m going to make to the blog.  Since its going to take a solid block of serious work to make it all happen, I’m planning my site makeover for the beginning of my April vacation–I just can’t wait until summer!

8.  See new things
I didn’t do well with this one this month.  March was dumb like that.  Hopefully April will bring some exciting travels! 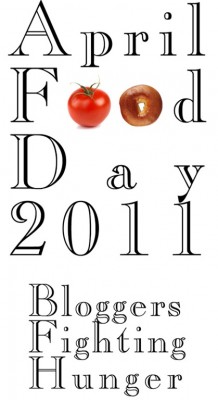 For the third year in a row, April Food Day is encouraging bloggers to spread awareness about hunger in America and donate to help alleviate this problem.

Highlights: Halloween
Highlights: T-Day Sides, Decorating and Desserts
Things I Learned While Creating My 101 in 1001
Keeping it Simple – Easter 2018
Did you enjoy this post? Share it!
« Good Stuff
Highlights: Pasta Lover’s Edition »