I’m completely fine with the fact that October is over, despite the fact that I love fall and October is generally one of my favorite months.  This month was crazy— we started with 80 degree temperatures over Columbus Day and ended with last weekend’s snowstorm (which wasn’t bad around here, we didn’t even lose power).  The shininess of the new school year began to wear off and I realized the mountain of work that is before me.  I spent the last couple weeks of October reevaluating a lot of things and, like many people out there, I’m ready for the new start that is November.

1.  Waste less time/Create a posting schedule and stick to it

Yeah…about that.  It occurred to me yesterday (technically in November, but that’s not the point) that I can’t accomplish what amounts to a first year teacher’s workload, run a successful blog, cook dinner every night, participate in various community organizations, get enough sleep and watch 2-3 hours of television every afternoon.  Granted, the television watching was usually while I was working on something else, but that time wasn’t being as productive as it could’ve been.  I’m now embracing my “first year” teacher status, reducing weekday TV viewing to one show and feeling a lot better about my schedule.  Now I’m just trying to catch up on all the things I got behind on during October because I thought things were magically going to accomplish themselves.

Even the posting schedule suffered this month; there were a couple days where posts didn’t go up for various reasons.  I felt awful about it at the time, but we’re back on track now, with a full schedule for the next month.

2.  Read a chapter of the bible every day/(no revised goal)

This month was middle of the road for me-not as good as September, but better than the majority of months this year.  I enjoy reading in the morning, but my recent disorganization has polluted my routine and left me feeling like I don’t have time.  Also, the increasingly cold weather makes it even harder to get out of bed in the morning.

3.  Drink more water/Drink at least one water bottle of water a day and drink something else with every meal

Given the fact that my classroom has been like a sauna of late, I’m doing pretty well with this goal.  Much of my afternoon beverage consumption has transitioned to hot tea, but I’m okay with that.

Oh,  Animal, Vegetable, Miracle, I’ve been reading you since August.  I feel bad because it was on my “to read” list for so long and so many people told me they liked it.  I really want to like it but so much of the book is information I’ve already heard and it’s just not grabbing me.  For school year reading I really need something engaging.  As much as it sort of bums me out, I think I’m going to pick a new book for November.  Suggestions?

5.  Improve my fitness by going to the gym twice a week and doing sit ups and push ups on off days/Do something physically active at least 3 times a week

My October 2nd 5k race was awesome.  I met my goal of finishing in under 30 minutes and had a great time doing it.  Since then, I’ve only made it to the gym a couple times.  The good news is that my desire to go is increasing, so hopefully I can build it into the (already packed) routine in the coming weeks.

6.  Open our home at least once a month/Have at least 12 different groups of people over to the apartment

Why is this so difficult?  It’s a lot harder to organize schedules than I once hoped.  We did go visit some friends for dinner and provided some of the food, but it’s not the same thing.  I’d like to say that we’ll be successful in November, but we’re starting to get into the holidays and schedules are really going to get crazy.

7.  Give Relishments a makeover/(no revised goal)

I may have had a minor blogging crisis this month  (did I mention that October was not a great month?)  Luckily, I have awesome friends who listened to me ramble and helped me improve my vision for the site.  I’m really excited about the content I have planned for the next couple months-including some sponsored posts, reviews and giveaways.  I feel like I was beginning to lose sight of why I’m doing this and where it’s going, but after some thinking, things are clearer.  Hopefully Relishments will become even more focused and useful over the coming weeks.

Brian and I met up with a 2 couples from college who we haven’t seen in a long time, both of whom live an hour or so away from us.  We checked out a beautiful new (to us) walking trail over Columbus Day weekend and enjoyed the awesome scenery. 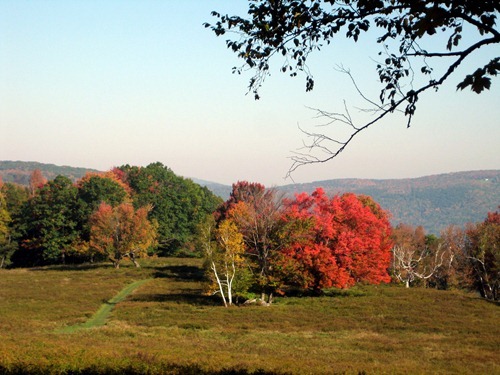 Goal Progress (Or Lack Thereof)
Goals in Progress: September
Highlights: Resolved
Five of the Best Decisions I Made in 2018
Did you enjoy this post? Share it!
« Corn, 3 Ways
50 Days of the Little Things, Part 3 »