October begins in just a few short hours.  It’s beginning to look like fall around here, but it definitely doesn’t feel like it.  I’m ready for temperatures to leave the 80s and head towards the 60s.  I’m looking forward to wearing jeans and sweaters and drinking hot chocolate.  Granted, I’ll be complaining about winter before long, but I love fall while it lasts.

1.  Waste less time/Create a posting schedule and stick to it

The return to the school schedule has been a transition, but I think I’m starting to get into the swing of things.  I haven’t been wasting a lot of time, but I also haven’t been making optimal use of it either.  Last night, when I should’ve been lesson planning and cooking and calling my best friend from college, I was cleaning my apartment.  Necessary, but not the best use of my time. I’m hoping that October will bring routine and I’ll be able to get more done after school.

I still love my posting schedule.  It was such a simple thing, but its really effective for me.

2.  Read a chapter of the bible every day/(no revised goal)

Despite the fact that my after school routine is a bit off-kilter since returning to school, my before school routine is awesome.  For some reason I’m waking up with my alarm (instead of repeatedly hitting snooze), keeping myself from getting distracted by the computer and finding the time to read my bible on a regular basis.

3.  Drink more water/Drink at least one water bottle of water a day and drink something else with every meal

I drink a lot more water while at school than I did while I was at home during the summer.  I’ve been fighting a cold on and off for the past couple weeks, so I’ve been consuming even more than usual.

I’m still plugging away on Animal, Vegetable, Miracle.  I was initially looking forward to it, but much of what she discusses isn’t news to me.  That, and I’ve been reading a lot more textbooks and less fun books lately.  I’ll finish it, it just might take a while.

5.  Improve my fitness by going to the gym twice a week and doing sit ups and push ups on off days/Do something physically active at least 3 times a week

I’ve made it to the gym a couple times this month, but there’s been a lot of after school meetings and obligations.  The good news is I’m racing on Sunday!  I’m excited about my third 5k of the year, though I’m not expecting to set any records.

6.  Open our home at least once a month/Have at least 12 different groups of people over to the apartment

September flew by and we had something going on every weekend of the month.  So far, October looks a little more peaceful.  I really want to get to know some of my coworkers better, so hopefully we can organize a get-together or two.

7.  Give Relishments a makeover/(no revised goal)

For the first time since my blog makeover last spring, I’m feeling like I didn’t quite meet this goal.  The pile of stuff from HLS that I intended to follow up on is still sitting on my desk.  There are a number of “behind the scenes” changes I want to make, as well as other sites and opportunities I want to check out.  Maybe this month, when the weekends are a little more free.

Last weekend I had a great time checking out the Big E. 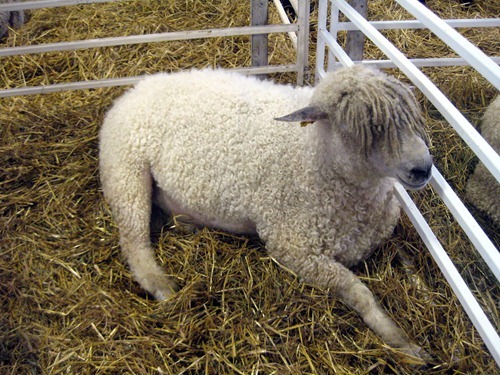 (I’m a big fan of this sheep we saw at the Big E)
Don’t forget to check out my 2011 goals page to see how I’ve been progressing since January!

Five of the Best Decisions I Made in 2018
Strengthening: 2015 So Far
101 in 1001: The Final Tally
Dessert Shouldn’t Be Stressful
Did you enjoy this post? Share it!
« A Blogger Birthday
Highlights: Restaurants »