The countdown to summer has officially begun.  There are 11 days left of school, and some of those are just final exams.  The end is so close, it’s hard to believe.  And so, as per usual, I’m in the midst of mentally making a “things to do this summer” list.  This list is always a mixture of home projects (make a photo book of last year’s summer vacation, get rid of some clothes, sort through the book collection), places to go (museums, stores, friend’s homes), and kitchen/blog projects (new header, better promotion, canning).  I really need to write my list down to encourage myself to actually make some of it happen. 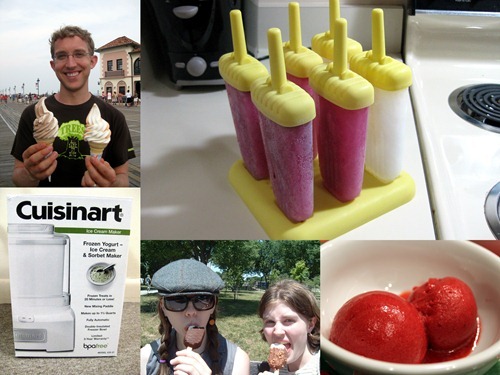 At any rate, high on the list for this summer is making popsicles and ice cream.  I got my ice cream maker in September, so I haven’t really had the opportunity to use it as much as I’d like.  I’ve been waiting for this time of year for months.  Luckily, the internet has had no shortage of inspiration.

One of my goals is to develop some original ice cream flavors, or at least homemade versions of some commercial flavors.  A while back Brian and I made ice cream using a recipe that came with it that was so close to Chunky Monkey I could hardly believe it.  I’m not sure my creations will be as original as Endless Simmer’s asparagus ice cream (nor am I sure that I want to try it).

If you don’t have an ice cream maker, I highly recommend you get one.  I think I’ve only used mine three times, but I am in love.  The Kitchn tested out several models and has recommendations for the best ice cream maker.  (I have the Cuisinart ICE-21 Ice Cream Maker)

Before I could easily make my own ice cream, I was pretty into experimenting with ice pops.  I’ve never made any with alcohol, but these frozen margarita pops from Chow sound pretty tempting.  If you want to turn other drinks into dessert, The Kitchn has a post on how much alcohol to use when making boozy popsicles.

If You Can Make That, You Can Make This has a recipe for Extremely Fancy Red White and Blue Popsicles, perfect for the Fourth of July, that have some gourmet ingredients.  Kate also provides some tips for making any kind of layered popsicle.

Anyone have any icebox cake experience?  I keep saving recipes and Serious Eats just posted 8 more icebox cake recipes, but I’m a little scared to try making one.  I’m similarly nervous about/interested in this lime semifreddo with pretzel crust, also from Serious Eats.

Of course, you don’t have to make your own frozen treats.  But how do you know which frozen treats are the healthiest?  Huffington Post has some guidance when you’re choosing between ice cream, frozen yogurt, sorbet or slush.

Chow’s Supertaster James Norton tested out Tempt’s hemp ice cream and found it to be “quite nice”, but not necessarily healthier.

NPR took a visit to Ben and Jerry’s “Flavor Graveyard”, where retired flavors are “buried”.  Brian and I had to chance to see the graveyard  a couple years ago, it’s definitively interesting to see what flavors make it and which are no longer produced.

Any suggestions for what kinds of ice cream and/or popsicles I should try to master?