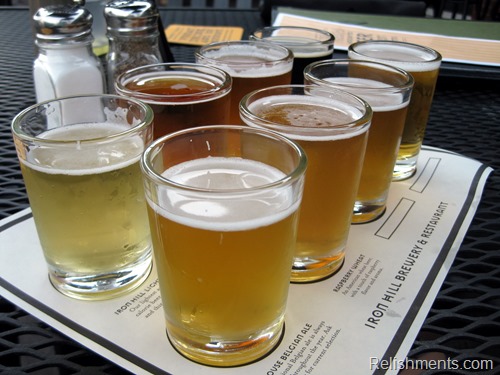 I just found out that today is National Beer Day, which is lucky because I was going to write this Highlights post regardless.  Food Republic has kindly compiled all of their recent beer coverage into one place, saving me the trouble of linking to all of their beer posts.

Craft beers are experiencing a huge surge in popularity.  Serious Eats has six trends to expect in the craft beer world based on this year’s Craft Brewers Conference.  You could also try one of these 10 Craft Beers for Spring, from The Daily Meal

Oregon is so into craft beer that they’re considering naming one of the yeast strains an official state microbe.  What will they think of next? (via NPR)

In other places around the country there’s a growing interest in local grains for creating malts, reports NPR.

Within the craft beer craze there’s another movement: canned beer.  This summer Brian and I went to Baxter Brewing in Maine, where they only put their beer in cans.  Food & Wine has a list of some of the better canned craft beers currently available (though I was pretty happy with the ones we got to try in Maine).

With all the popularity of craft beers, I’ve seen several stories lately about beer brands being more transparent about whether their from craft breweries or larger businesses.  Adweek has a look into the controversy.

Best I can recall, my brewery visit count is up to 6 (Coors, Sam Adams, Baxter Brewing, Gritty McDuff’s, Sea Dog Brewing Co., Sebago Brewing Co.).  The Daily Meal has a list of America’s 10 Best Brewery Visits.  The Craft Beer website also has a collection of “Craft Beer Trails”, organized by state.  We’re currently in the process of visiting all of locations on the Maine list.  There are also a few in Vermont and Massachusetts I’m hoping to check out in the next few years.

It’s no good when beer goes bad.  Serious Eats has some tips for identifying off flavors in your bottle.

Foodbeast reports that there’s a push in Florida from some people who’d like to see 64 ounce growlers legalized.

If you’re into making your own brew (one of the few DIY projects I have no interest in attempting), Offbeat Home has some tips for storing home brewing supplies.

Anyone have a favorite beer (craft or otherwise) they’d like to recommend?