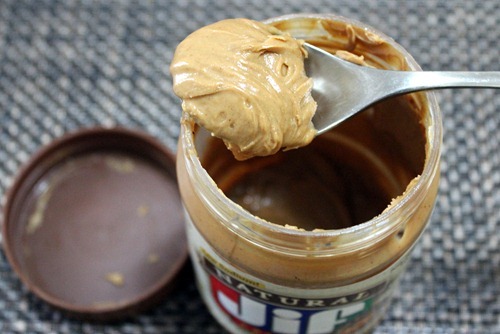 Peanut butter is generally regarded as a favorite food of children, but I think I’ve consumed more peanut butter in the past couple years than I ever did as a kid.  I didn’t eat a peanut butter and jelly sandwich until  I was in my late 20s; turns out they’re actually quite good.  And I’ve certainly consumed more than my fair share of chocolate and peanut butter confections.

Recently however, my peanut butter intake has been on the rise.  Not only are PB & J sandwiches perfect for when there’s not much else around to eat, but I enjoy peanut butter toast as a snack.  Peanut butter is also featured in many of my favorite Asian-style sauces.  I think I’m going to need to start increasing my peanut butter purchasing, however, because there’s a lot of great ideas out there:

In the general information category, The Kitchn addresses the question “Do you have to refrigerate peanut butter?”  There’s lots of interesting comments in support of both sides.  For the record, we keep ours in the pantry.

Chow’s Supertaster James Norton samples 5 different peanut butters in the course of a 3 minute video.  James also tried 3 supermarket peanut butter cookies in celebration of National Peanut Butter Cookie Day.  How do I get a job like that?

But who needs products when there are peanut butter recipes?

I gave my waffle maker to my sister, but I think I’m getting it back soon.  I’m looking forward to that for a number of reasons, one of which is Julie’s Peanut Butter Waffles.  Homemade frozen waffles?  Genius.

If waffles don’t interest you, try one of The Kitchn’s 10 ways to start your day with peanut butter.

Liz has been really into peanut butter lately.  In the past few months she’s posted recipes on Little Bitty Bakes for Fluffernutter Brownies (so simple!), Peanut Butter Cookie and Candy Cups, and Peanut Butter Graham No-Bake Thumbprint Cookies (yay for keeping the oven off!).

Serious Eat’s Reese’s Peanut Butter Cup Sundae recipe is certainly not healthy, but it does sound awesome and would probably keep me full for at least a day.

If you find your residence cool enough to turn on the oven, Peanut Butter Banana Bread from FoodBeast may be worth a try.  Bananas never last long enough here to make bread, but some day I might get on it.

Speaking of S’mores, Serious Eats has 5 ways to add peanut butter to the classic campfire dessert.

If all those ideas still left you uninspired, check out Cooking Light’s collection of 15 peanut butter recipes.