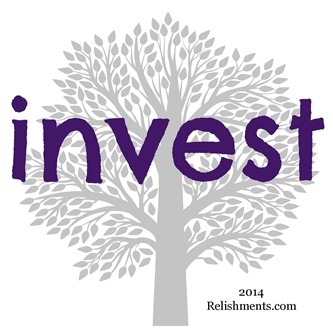 and now, some areas I’ve been focusing my investing on, in no particular order:

I spent the first couple months of 2014 experimenting with makeup while at the same time trying to swing my purchases (in all facets of my life) towards more environmentally and humanly friendly.  It’s been fun starting to feel like I actually know what I’m doing when I apply makeup, but I’ve still got a long way to go.

When we returned from winter break, I revised my morning schedule and it’s been working really well for me.  Now, instead of hanging out downstairs on my computer trying to wake up until the last possible moment and then rushing to shower and get ready, I shower first thing and then spend some time on the computer and finish up by getting ready.  This has allowed me to stick with the She Reads Truth reading plans more than ever over the past couple months, feel more organized in the morning and leave for work earlier than ever before.

I’ve also been relaxing more.  I consumed a lot of media during the first couple months of 2014 (including re-watching the first 2 seasons of Veronica Mars) and did a lot of nothing.  And, for the first time since I made “intentionality” my goal in 2013, I was able to do so without feeling guilty about it.

I feel like I worked really hard on my blog over the past couple months, though a lot of that probably isn’t visible to you.  I tried to be more intentional about promoting my own site, I currently have product reviews for two more companies that I’ll be sharing with you over the next few months (in addition to the Neat meat substitute review that went up last week).  I did some facelift work on Relishments, worked towards getting site sponsors and created a media kit.  Special thanks to all those who helped me.  I’m feeling pretty good about how things are shaping up around here.

We’re coming up on a year in this house and progress is slow.  Granted, there’s not a lot we have to do, so that enables us to procrastinate, but I am itching to start changing some things up around here.  High on my list: buying a shelving set for the upstairs hallway (likely IKEA’s new Kallax), finding some interesting furniture pieces for our downstairs entryway (yard sales), getting permanent shelves for the pantry, doing something about the yard and making some paint decisions for the first floor.

Making time to hang out with people continues to be high on my list of things to prioritize, but making it work is easier said than done.  My sister came to visit a couple weeks ago which was awesome.   She just started selling Mary Kay which doesn’t completely align with what I’d like to be purchasing, but I’d rather support her than some corporation.  I hosted a Mary Kay party at my house and we enjoyed spending a Saturday shopping.  Her plan is to purchase a home with her husband in the very near future, so then it will be even easier to visit her.  The Olympics were an awesome excuse for me to spend a bunch of time with my good friend Jen.  We made use of her cable subscription to watch events on DVR; we also hung out at my Mary Kay party and did some shopping together.

Earning my latest teaching license in January was a huge step that I’ve been working towards for years.  Having that pressure off my back is such a relief and has provided me a little additional time to focus on other aspects of my job.  I also completed a big work project last week which is such a relief.  There never seems to be as much time to get work done as school as I’d like (in my next life, I’m picking a career that doesn’t have any take home work), but I feel like I’ll be more on top of it in the next couple of weeks.

Investing in March and April
Investing in Summer–Blog Updates, Home Impro...
Investing in 2014
Did you enjoy this post? Share it!
« Highlights: Food for Thought
Pantry Meal: Whole Wheat Waffles »