I know it’s officially spring, but I’m continuing to make soup until it’s too hot to eat it.  Plus it’s been disgustingly cold and rainy all week, which is definitely soup weather.

Sunday night’s creation was an incredibly simple Tuscan White Bean Soup, the recipe for which was featured in The Atlantic about a month ago.  It couldn’t have taken me more than half an hour to prepare, it’s vegetarian (if you substitute veggie broth for the chicken) and I’m a sucker for anything with cannellini beans.  Or garlic. 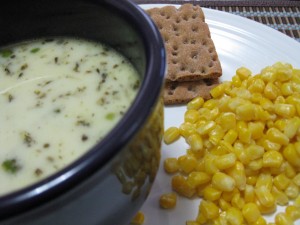 I exchanged the cream for half and half, because sometimes I don’t see the point in buying cream for just one recipe (but sometimes I do). And, because I almost never have fresh herbs, I used dried thyme.

Simple, and yet surprisingly good.  I don’t think Brian was quite as enamored as I was, but I really, really loved the taste of this soup (It’s adapted from a Giada de Laurentiis recipe–what’s not to love?).  The only thing that I would’ve changed was that the soup could’ve used a little more bulk…which got me thinking about potatoes…which got me thinking about a soup I made months ago and never posted about…

Every issue of Food Network Magazine comes with a little booklet of 50 recipes. One month it was mashed potatoes, another it was cookies. In one issue (October 2009) it was “50 Easy Soups”. Clearly, I wasn’t complaining.  I tried out  #16: Potato Chowder. 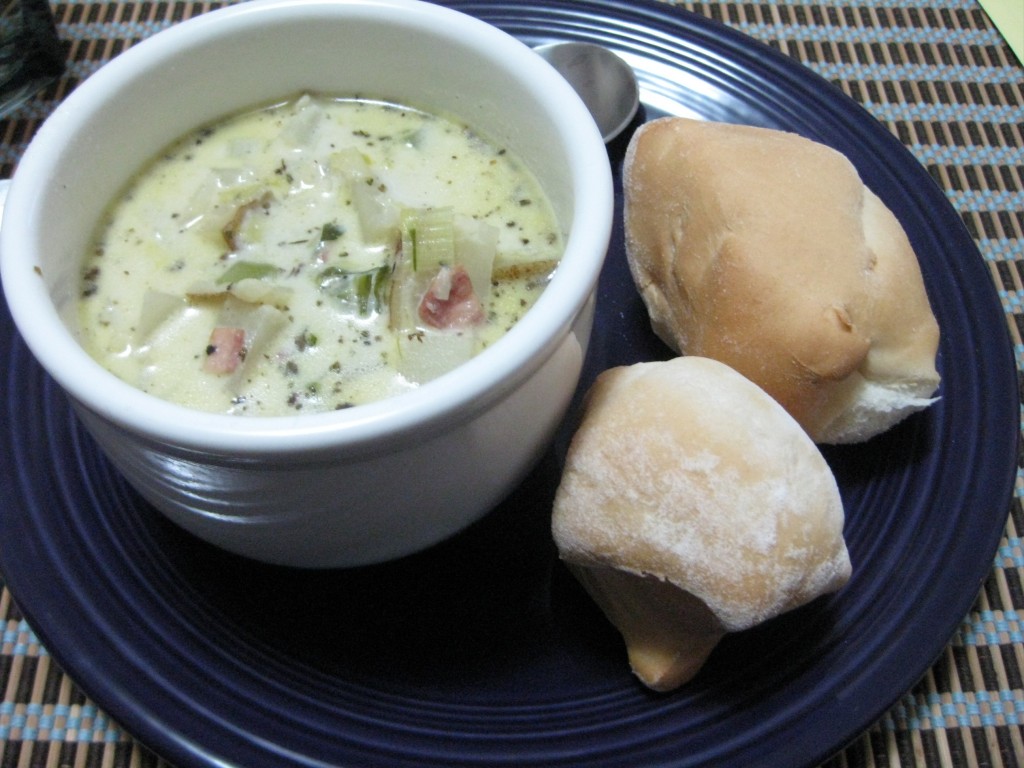 Almost to my surprise, this basic chowder from Food Network of all places,  did not disappoint.  I cut down on the fat a bit by using turkey bacon (which was a new experience in and of itself) and the chowder was still awesome.  The recipe also serves as a base for  Potato Cheese Soup (#17), Clam Chowder (#18), Corn Chowder (#19), and Fish Chowder (#20).

So…2 similar soups.  Granted, its been a while since I made the chowder, but I think if I had to pick one to add to my regular repertoire it would be the Tuscan White Bean Soup, though I’d probably add potatoes.  It’s vegetarian, there are beans, and you don’t have to deal with the chore of washing leeks.  I’m still not even sure I like leeks, though I’ve used them several times now.  I’d just as soon have onions.  The White Bean Soup is lighter, but there’s nothing wrong with that.

Enjoy–not too many days of soup eating remain! (Who am I kidding?  I’ll probably eat soup all summer!)

Highlights: Vegan/Vegetarian
My Return to the Kitchen
Delicious Bowl of Mush
Buckwheat Success and Failure
Did you enjoy this post? Share it!
« Highlights: Breakfast
April Food Day 2010 »