This post contains an affiliate link. Thanks for supporting Relishments 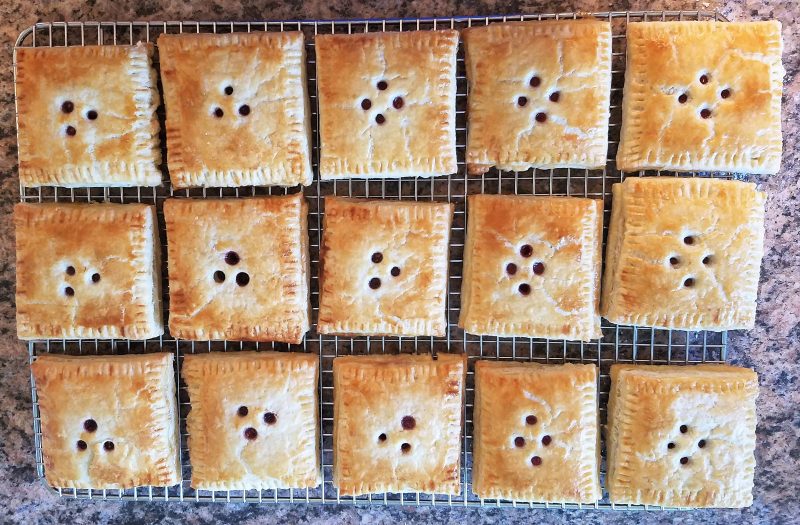 This is not the first time I’ve made King Arthur Flour’s hand pies.  The recipe was last July’s Bakealong challenge as well.  I have mixed feelings about King Arthur Flour’s “Best of Bakealong” challenges – I love Bakealong because I get to try something new every month and I’m always somewhat disappointed when a recipe repeats.  But if there was a recipe I needed to revisit, it was this one.  My attempt last year was delicious, but I completed it in a rush and the result was not very attractive (click here to see what last year’s looked like!). 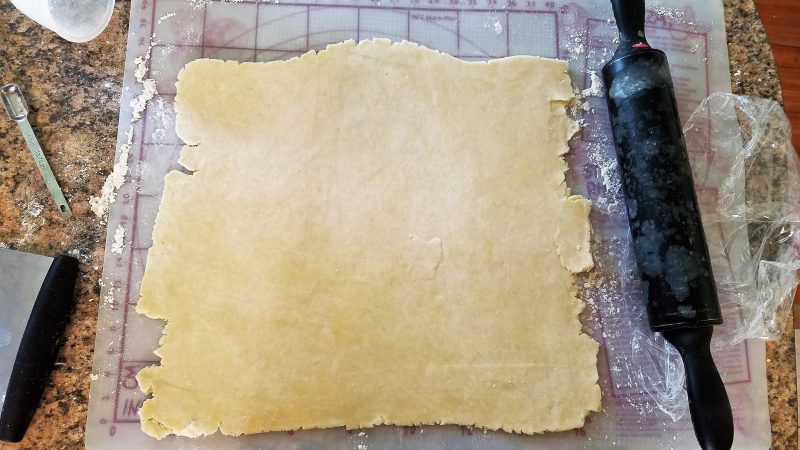 My primary goal in making these hand pies again was just to make them look as good as I knew they could.  Of course, I’m never one to just settle for a single challenge, so I also opted to attempt raspberry filling (instead of the original recipe’s blueberry) and see what would happen if I used supermarket preserves instead of making my own filling. 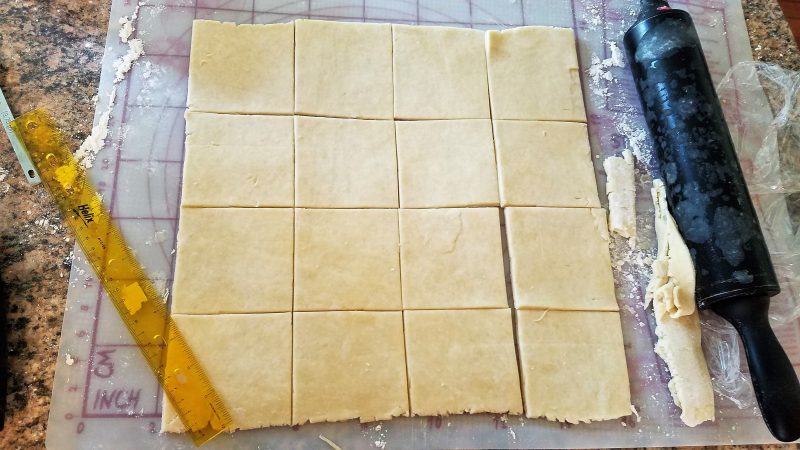 I made sure to take the dough out of my refrigerator right at the recommended 30-minute mark, to avoid it getting too cold to successfully roll, which was an issue last time.  I worked hard to get the dough rolled out to the size recommended and then used a plastic ruler and my bench scraper to get the squares to be as close as possible to 3 and 1/2 inches on each side. 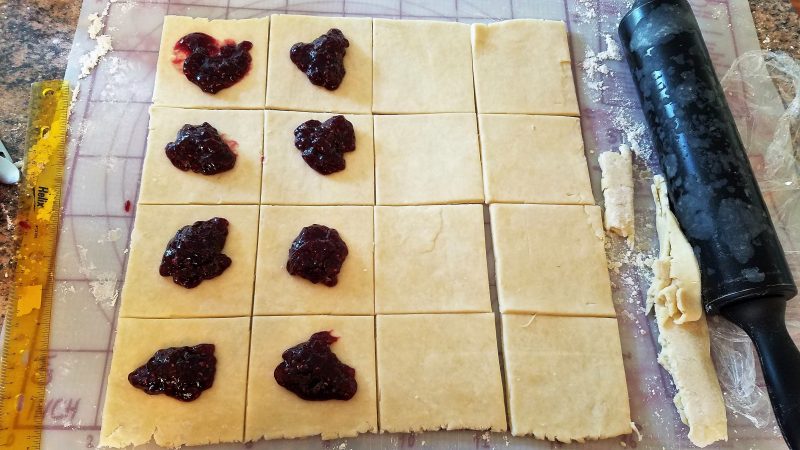 It isn’t much more effort to do a double recipe of something I’m already making once, so I opted to make a second batch of dough and follow the same rolling and measurement technique.  I used 3 cups of frozen raspberries I had leftover from last summer to make a filling, following the instructions in the King Arthur Flour recipe.  2 cups of raspberries probably would have sufficed; I ended up with extra “jam” (which was delicious on toast).  In the second batch, I used raspberry preserves we’d purchased at the supermarket.  The jarred preserves are above, the freshly made filling is shown below. 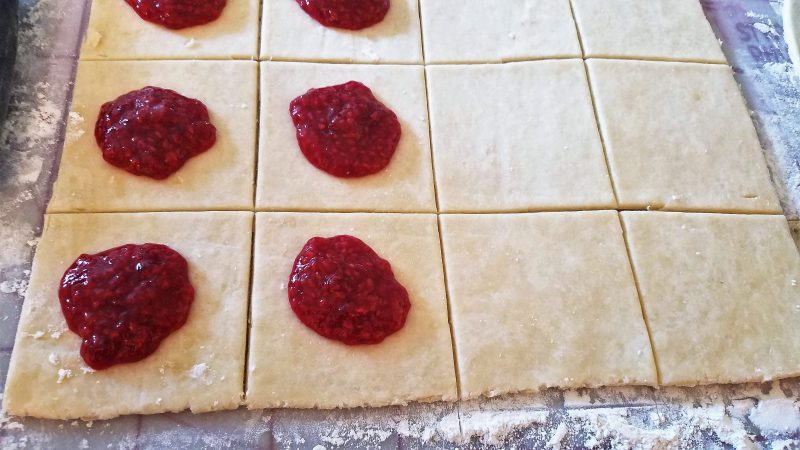 The first time I made this recipe, in addition to my uneven dough squares,  I was also really displeased with the vent slots I cut in the top.  Some of the #bakealong posts on Instagram use tiny cookie cutters to make adorable vents, but I don’t have any that are small enough.  Cutting out tiny circles occurred to me, and then I realized I had just the tool for the job; I used a stainless steel straw to punch the holes in the top of the dough (before I put them on top of the filling).  3 holes for the homemade filling, 4 holes for the jarred preserves. 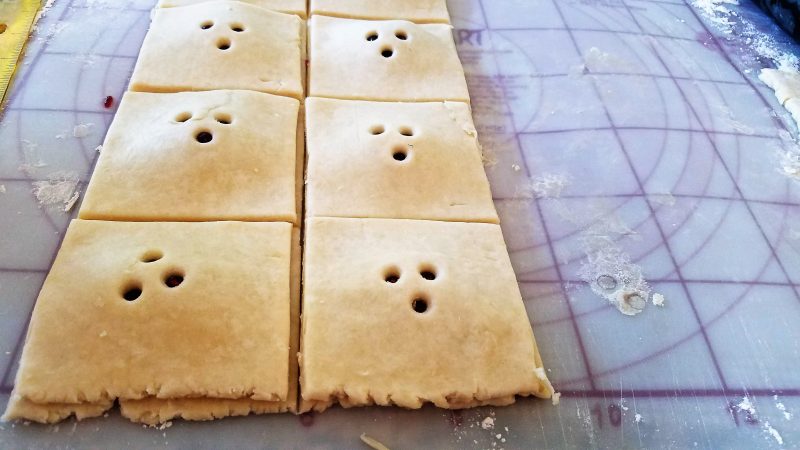 Both the homemade filling and the preserves worked equally well.  The homemade option was a bit brighter in flavor, but that would vary based on what preserves are used.  They seemed to be pretty equivalent in terms of how they held up inside the pies.

As one should, I sprinkled my dough trimmings with sugar and cinnamon, cut them into wedges and rolled them up.  Then I baked them alongside the hand pies. 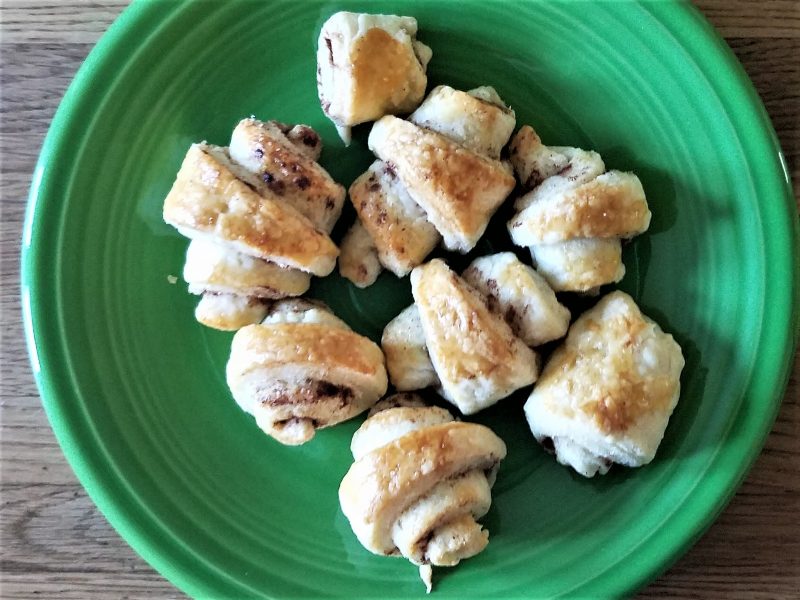 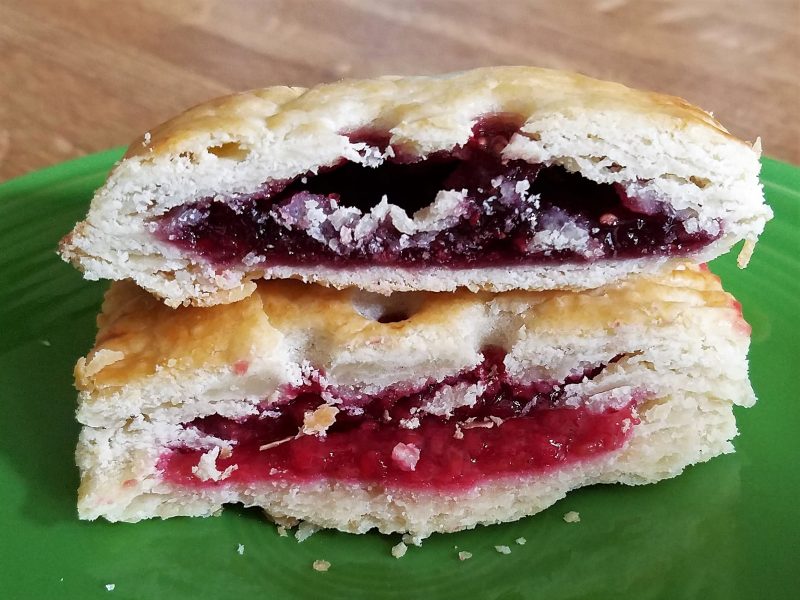 I was so pleased with how well these hand pies turned out and the results of my filling experimentations.  The extra effort to get the squares even and try something new with the vents was totally worth it.  Another reason to make a double batch: I now have a whole bunch of hand pies waiting in the freezer. 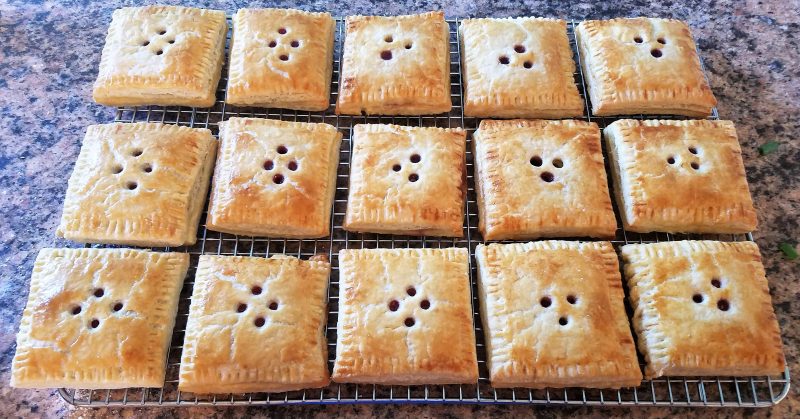