This is a very pretty apple galette.  It also taught me a very important lesson.  Here is the story of the most recent time I set our smoke detector off. 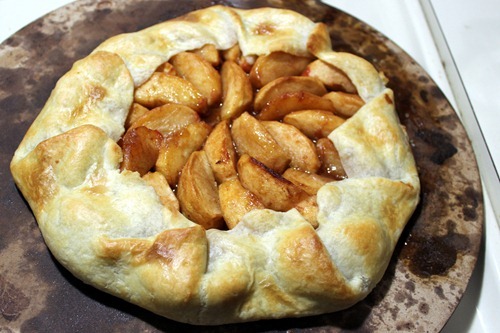 Our CSA sometimes has apples, which is awesome, but they don’t always look as good as I’d hope.  Brian suggested that we use our most recent batch to make a galette.  I didn’t have a recipe in mind, but then Shutterbean posted her Valentine’s Day recipe suggestions and included an apple galette.

The recipe takes a bit of prep.  The dough requires at least an hour to chill, but it’s assembled in a food processor, so it’s not really that bad.  The apples, which are peeled and sliced, cook in butter, vanilla (I used a teaspoon of extract), cinnamon and sugar for 45 minutes before being added to the crust.  But all of that went completely fine; the dough rolled out perfectly, the apples fit great inside of it, and the crust rolled up beautifully.  I was so proud.

Tracy’s recipe suggests cooking the galette on a pizza stone.  I love using my stone for things other than pizza, so I went for it.  Shortly after putting the galette in the oven, I headed out for a meeting, leaving Brian in charge of removing it when the timer went off.

An hour and a half later I walked back into the apartment.  The smell of burnt food instantly hit me and I cringed, knowing I wasn’t going to be happy when I reached the kitchen.  Luckily the macaroni and cheese, which I’d also left in the oven and under Brian’s care, was done and ready to eat.  The galette, on the other hand, had been a bit of trouble.  When Brian had gone to remove dinner from the oven, he discovered that the liquid from the galette had escaped the crust and flowed right off the pizza stone.  Upon hitting the bottom of the oven and the heating element, the sugary mixture began to burn, setting off the smoke detector when Brian opened the oven.

Even though it still had half an hour or so to cook, Brian removed the galette from the oven.  It remained there until I came home.

As penance for not foreseeing the mess resulting from the leaky galette, I immediately got down on my knees and began scrubbing the bottom of the (now cooled) oven.  Luckily, our all-purpose vinegar/water solution, an abrasive scrubber, paper towels and some elbow grease made reasonably quick work of the mess. 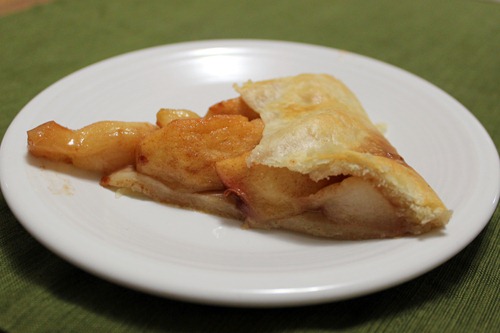 I put the galette back in the oven for another 15 minutes or so to add a little color to the crust.  Even though the galette ended up being a little undercooked, it was still excellent.  Very much like an apple pie without all the stress (assuming you remember to shield the bottom of your oven).  I will be making this again soon—on a rimmed baking sheet.