Everyone once in a while I think of a blog post topic and am honestly shocked to find I haven’t written about it before.  Since I don’t get out to eat a lot, there aren’t many local restaurants on my repeat list– I’m too busy trying new places on the occasions I eat out, rather than revisiting “the usual places”.  But Public Eat+Drink, in downtown North Adams, is definitely a place I’ve repeatedly visited since it opened in 2011.  Brian and I love Public Eat+Drink for its location, the variety of food on the menu (some of which is vegetarian friendly, if that’s the direction I want to head) and the ambiance.  It’s the sort of place where you can feel comfortable grabbing a drink in the evening after a busy day or arrive a little dressed up for a date.  We’ve been there almost as much as any other restaurant in the northern Berkshires– at least five times that I can recall.  And yet, I’ve never written about it.

So when Brian and I recently found ourselves available to go out for lunch and in possession of a coupon from Berkshire Big Deals that I’d purchased a couple months prior, we headed back to Public without hesitation.  Lunch service is relatively new to Public and I was looking forward to trying it.  (Side note: If you’re living in the Berkshires and you’re not following Berkshire Big Deals, you’re missing out on a lot of good coupons to restaurants and other local businesses.)

After choosing a couple beverages from Public’s lengthy selection of on tap drinks (one of my favorite things about the place), we ordered our entrees. 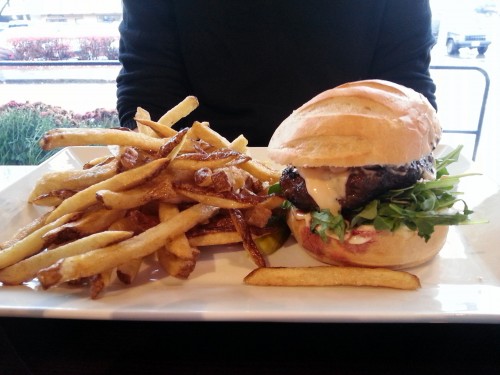 Brian had the Brie Burger, an item that had also tempted me.  The fries were thin and crispy which meant I stole more than a couple from his plate.  As it was a cold, dreary day, Brian started out with a miso soup that I didn’t photograph, but did sample and found really delicious. 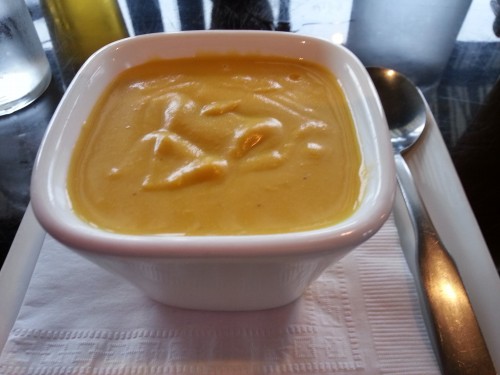 I started with a cup of the Butternut Bisque.  It was good and had a little spice to it, but was very very thick.  I still haven’t decided if that was a good thing or a bad thing.  I’m not sure I’d order it again, but that’s mostly due to personal preference.  For my main course, I ordered the Housemade Italian Sausage Flatbread.  As you can see below, it was fairly good sized and had been cute into several slices.  The bread was nice and crispy and there were plenty of toppings.  The sausage was very mild and I was hoping for spicy, but again that’s just me.  Still, I would definitely order one of Public’s flatbreads again.  I left the meal feeling satisfied, full and really glad we’d enjoyed another meal at Public. 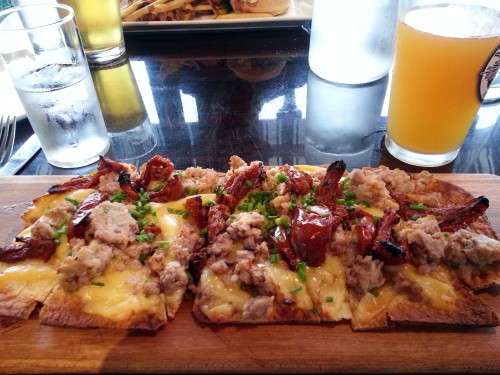 I’m sure we’ll be back at Public sooner or later.  We’ve taken my parents, said goodbye to good friends, eaten dessert with a friend from across the state and enjoyed dates there.  It’s been a great spot for all those things.

Scenes from the 17th Annual Garlic Festival
Portland Food Adventures: The Holy Donut and Duckf...
There Goes My Money…
Next Stop, Jam
Did you enjoy this post? Share it!
« Twosday X
Meals in a Pinch »