As I’ve mentioned several times now, I spent the bulk of last week in Montreal with Brian.  We were celebrating Brian’s birthday, but mostly we were just on vacation.  You may recall that I was in Montreal in the spring of 2014 for my mother’s birthday.  Since Brian had never been to Montreal, we ended up doing some of the things I’d already experience (which I was totally fine with) and checking out some new stuff.  I always have good intentions to be leisurely about my travels, but then there are so many things I want to see and do that we always find ourselves walking all over the city.  The apartment we rented was within reasonable distance of public transportation, but far enough away that when we traveled to an area, Brian and I wanted to make the most of it.  As a result, our days were pretty packed and we were pretty worn out by the evening.   After a fairly relaxed Monday evening following our drive up, we hit the ground running on Tuesday. 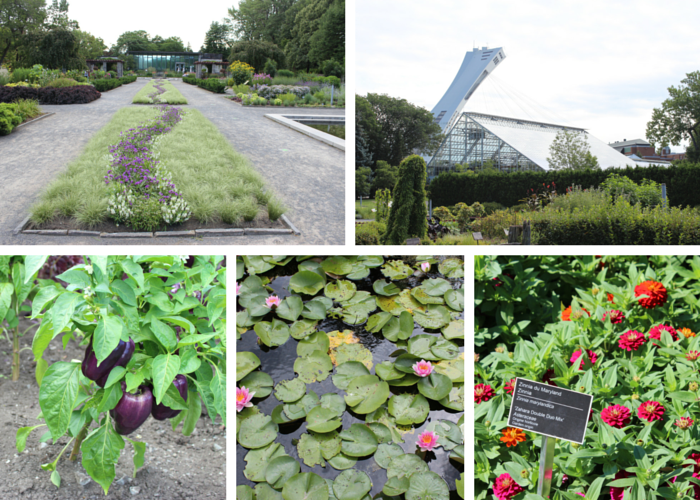 We started out Tuesday morning with the Botanical Gardens, which I had done before but were much more impressive in August than they had been in April.  I found the vegetable gardens to be especially impressive.   We wandered from the gardens to the Biodome, eating a lunch of cheese sticks, watermelon and popcorn that we’d carried with us.  I always enjoy zoo-type places and the Biodome was fun to revisit.  It was also rather crowded, especially in the area featuring the temporary “Nature’s Slowpokes” exhibit, which featured some rather cool tortoises and a sloth who didn’t seem interested in leaving his “nest”.  We also made a quick pass through some of the Olympic Stadium areas, which were being used for some sort of ropes camp. 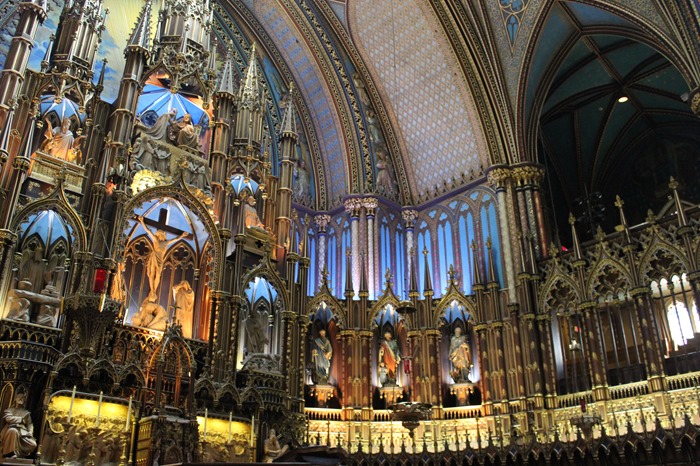 I was pleased that Brian was interested in visiting the Notre Dame Basilica, because I think it may be one of my favorite things in Montreal.  We took the tour (why wouldn’t you? It’s free with admission!) and spent some time appreciating the beauty of the building.  Well worth the $5. 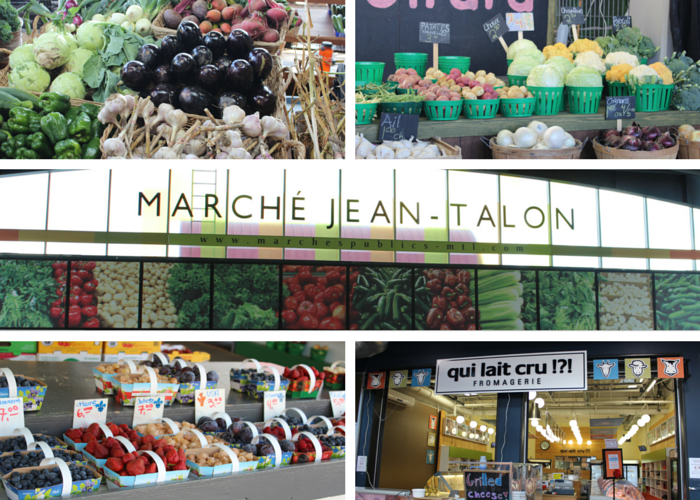 We also took in some new sights on our visit to Montreal.  We checked out the Marche Jean-Talon, one of the city’s public markets.  I love public markets and everything looked delicious.  There were lots of produce vendors, as well as prepared food establishments.  We need more fromagerie shops in the United States.

I was really excited when planning the trip to discover that the Montreal Science Centre had a temporary exhibit about video games.  As promised, the exhibit featured hundreds of games from the entire history of video gaming on all kinds of consoles that you could play for, apparently, an infinite amount of time.  We hit the museum at a good time and, though many games were being played, were able to spend time on a number of games with little or no wait.  There were also exhibits about design, music, trends and more.  It was pretty great. 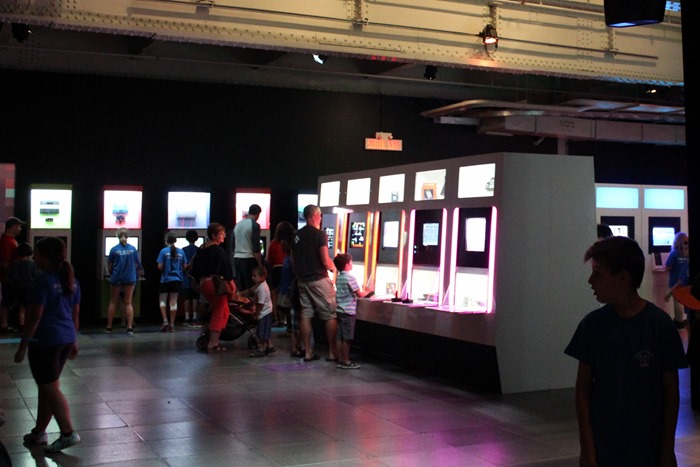 We also stopped by the Montreal History Center, which we sort of stumbled upon accidentally.  The price was lower than many museums we were considering and the exhibits were really good.  We took in an exhibit about the history of Montreal (which our knowledge was really lacking on), an exhibit called Scandal! about 1940-1960 in Montreal and checked out the participants in the center’s 2015 photography contest.

Perhaps my favorite new thing that we did in Montreal this time around was visiting Mount Royal.  Mount Royal is the highest point in Montreal and had come up several times on our trip.  Following some advice I read online, we took the bus into the park and got off at a beautiful scenic overlook. 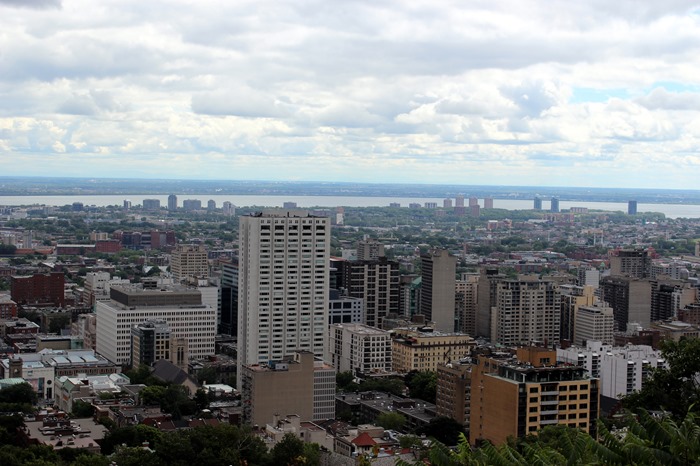 After enjoying the view, we headed up.  The advice I saw on multiple articles said that all you had to do was go up, because the main attractions were at the top of the park.  There is a metal cross at the summit of the park memorializes when Paul de Chomedey built a cross on the mountain to thank God for saving Montreal from a flood in 1643. But it became clear that we weren’t really headed in the right direction and soon found ourselves going in circles.  Perhaps we got off the bus in the wrong place? (Totally possible).  No sooner had we begun to get frustrated and start heading down, then did we stumble upon the cross and, shortly thereafter, the Chalet and another amazing view.  We then headed down the series of staircases that I’d read about and found ourselves back in the city.  Seems like it would’ve been just as easy to start from that entrance to the park, but at any rate, the views were breath taking.  There was a lot of the park we didn’t see and I’d go back in an instant; especially if I had a map. 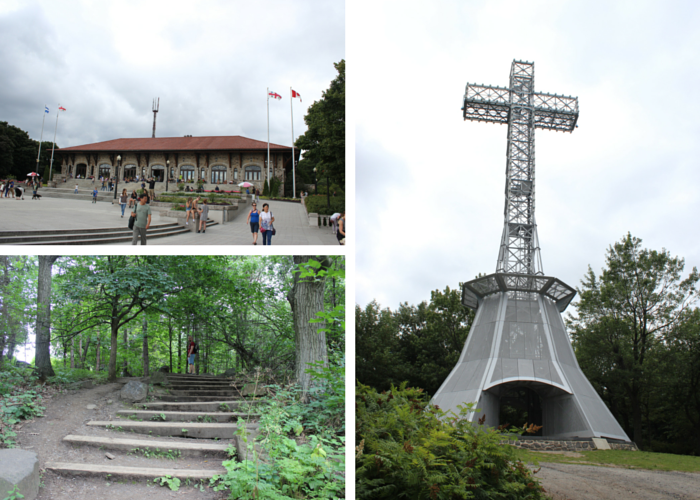 As always, I was very interested in eating well on this trip.  During the course of our 4 night stay, we ate dinner at two breweries: Dieu Du Ciel and Les 3 Brasseurs.  Both places had good beer and food.  Dieu Du Ciel was really busy when we arrived (on a Monday!) and we struggled to get the attention of the waitress, especially given the fact that we don’t speak French.  Nevertheless, Brian and I enjoyed good beers and a delicious platter of bread, pickles, nuts, olive tapenade, sausage, ham and cheese.  I enjoyed my beer even better at Les 3 Brasseurs.  Brian enjoyed his first poutine (covered in pulled pork) and I had one of their flatbreads, which was so big we ate half of it for dinner the next night. 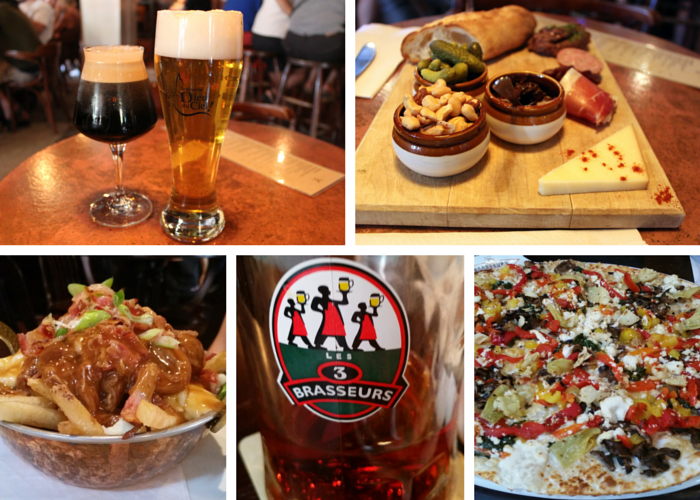 As always, I arrived in Montreal with a list of restaurants to check out that I’d generated from a variety of articles and lists I’d seen.  We visited Olive + Gourmando for lunch.  The restaurant was really busy and we had to wait a bit before being seated, but I loved my goat cheese and caramelized onion panini with housemade ketchup (and I don’t even like ketchup). Brian had an amazing looking “Majestic” hotdog.  We also stopped by Arhoma for breakfast sandwiches and coffee one morning and it totally hit the spot.  I spent the whole trip being jealous of the abundance of beautiful bread and pastries throughout the city.  Other excellent stops included St. Viateur Bagel for breakfast and Juliette et Chocolat for dessert. 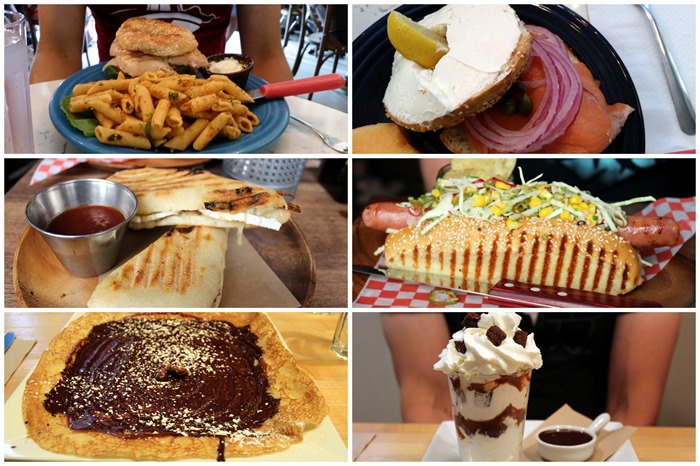 I think my favorite meal of the trip may have been our stop at Burger Royal.  We went there after our adventure on Mount Royal, after deciding not to wait in the crazy line at Schwartz’s (even though it was the middle of the afternoon and not a traditional meal time).  I was immediately excited by the menu featuring “fresh local Quebec grass-fed, free range, hormone & antibiotic free beef.”  They also had a housemade vegan burger that I would totally try if I had the opportunity to return.  Instead, I ordered the California Dreamin’ beef burger which had guacamole, blue cheese, fried egg, arugula, tomato, garlic + chive mayo and sweet onions.  It was incredible.  Bonus points for a perfectly fried, runny egg.  Brian had an equally great looking chili cheese burger. 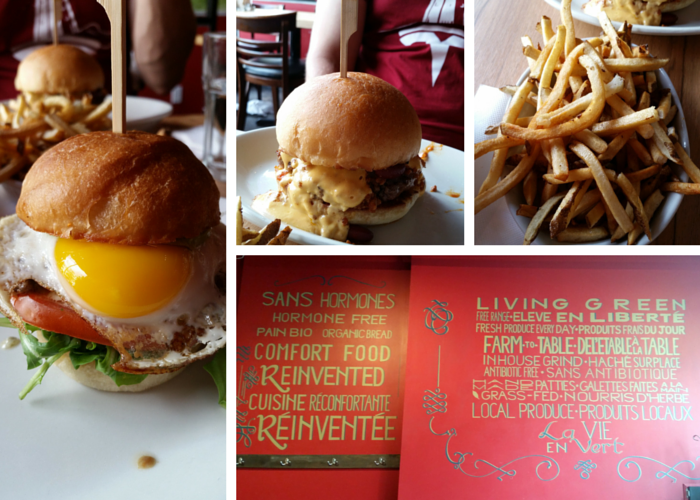 Did reading all that make you tired?  Imagine how we felt! I’m still amazed I finished my 5k two days after we returned home.  That said, it was a great trip and we packed a lot into just a few days.  I’ve written more specific reviews of some of the restaurants we tried on Zomato, if you’re interested. Montreal is such a great city and I’m glad it’s within reasonable distance home, because that greatly increases my chances of going back soon.