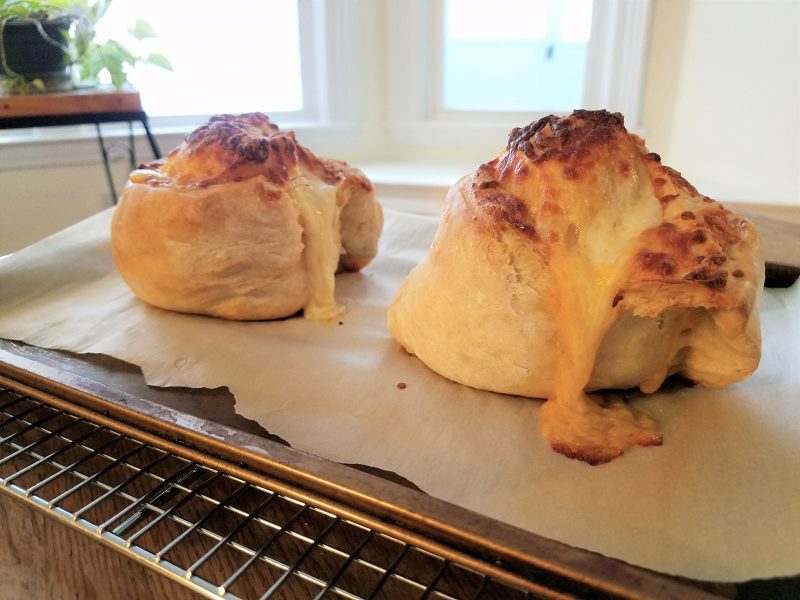 I’ve been participating in King Arthur Flour Bakealong challenges since August of 2016, but nothing I’ve baked has resulted in more positive attention on the Relishments social media accounts than this month’s Gruyère-Stuffed Crusty Loaves (which I made without gruyère, more about that later!).  And I totally get it – there’s not much that’s better than bread and melty cheese.  This recipe is worth all the positive attention it received. 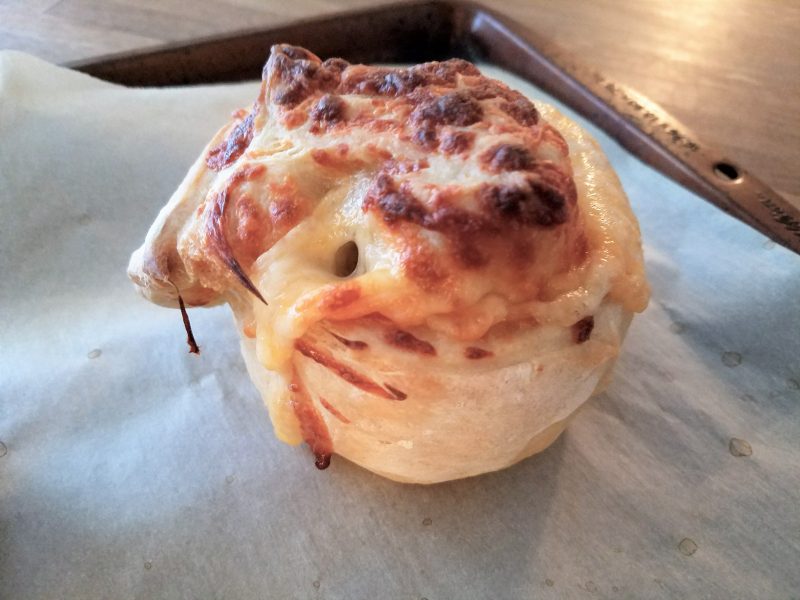 The recipe for the cheesy, crusty loaves involves making a starter that you leave out overnight before using it in your dough the next day.  I, of course, neglected to do that.  But since I had one of this winter’s many snow days last week, I began my March Bakealong at 5:30 am when I unnecessarily woke up for work.

By 1:30 in the afternoon, my starter was ready.   It was never as smooth or as bubbly as I thought it should be, or as the pictures in the step-by-step make it look, but it seemed fine.  The 8-hour break was good preparation for the other 2 rises (the dough and the rolled up loaf).  This recipe was not difficult to follow, but it’s definitely time-consuming.  Plan accordingly. 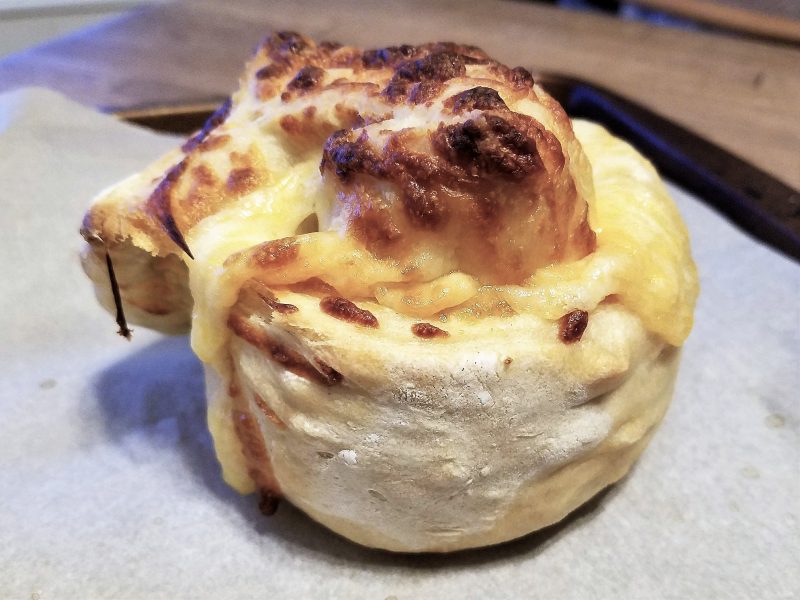 After combining the flour, water, salt, and yeast to make the dough and letting it rise, I rolled the dough into a rectangle. (I skipped the King Arthur Pizza Seasoning and don’t feel like the final product was lacking at all.) I think my rectangle was a little bigger than 9×12″ but I wanted to get it as close to 3/4″ thick as possible.  For the cheese, I used a store brand mix of 2 cups mozzarella and provolone cheese, plus a 1/2 cup sharp cheddar, mostly because I was too cheap to buy gruyère. 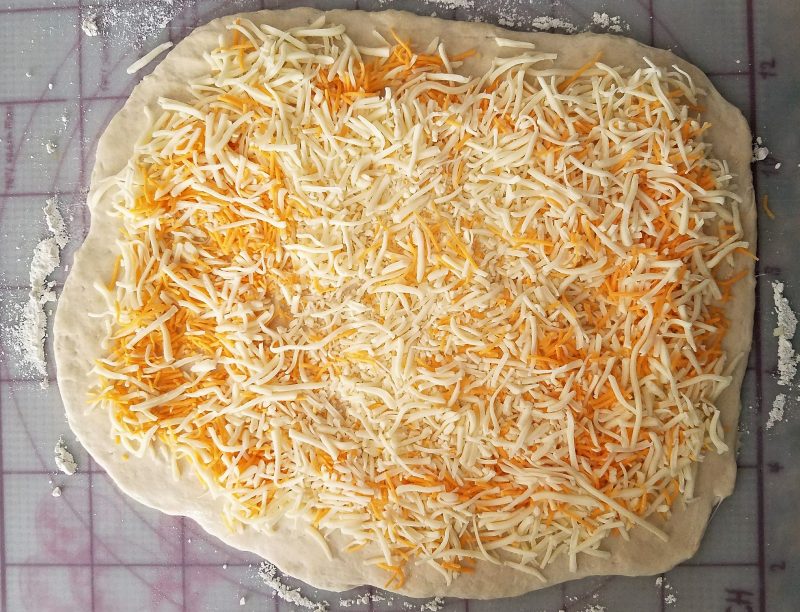 The actual rolling of the cheese-covered dough into a log was easier than I expected.  As usual, I did my best to keep the roll tight and not much fell out of the ends.

Cutting the log with my bench scraper (after yet another rise) resulted in four slices that were each about 4 inches tall.  Fortunately, they were easy to stand up on their open ends.  Following the recipe instructions, I only put 2 loaves on each parchment-lined baking sheet, though I think I may have been able to fit all 4 on one large baking sheet.  I opened the loaves up slightly at the top, mostly because the bench scraper sealed them partially closed. 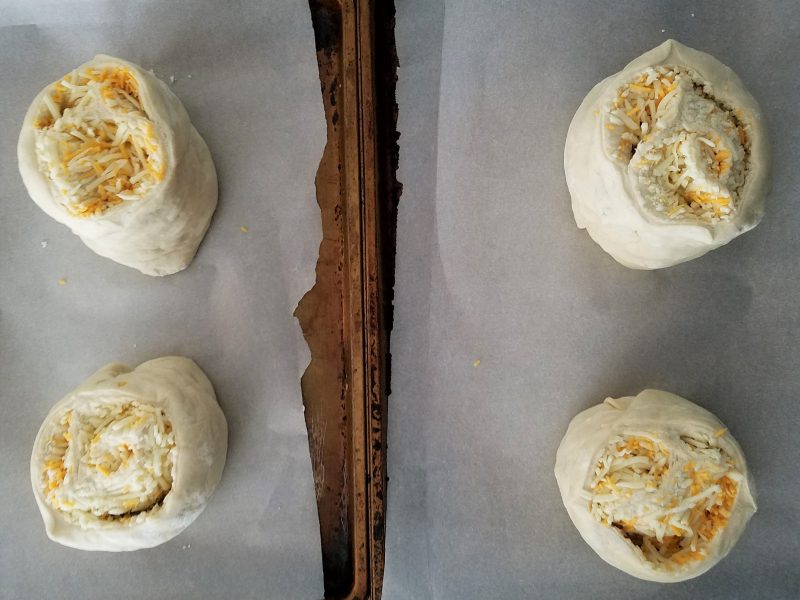 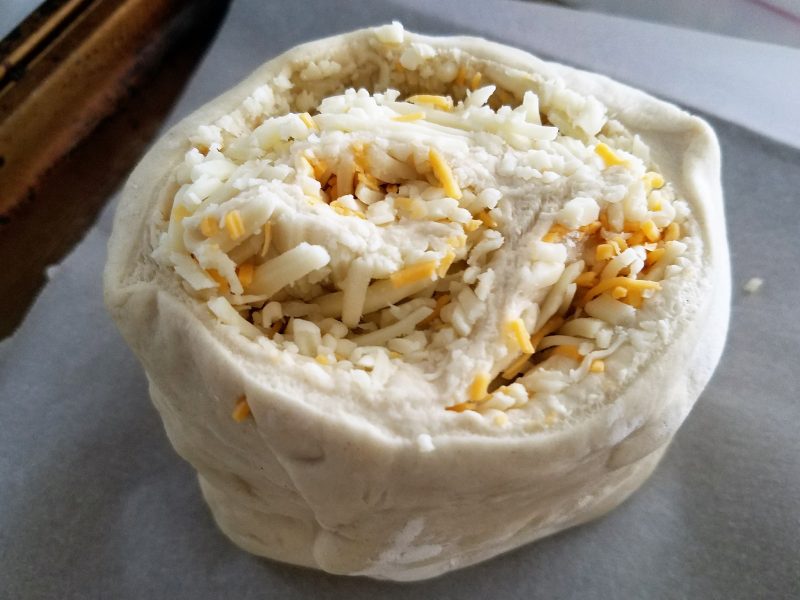 The loaves cooked up beautifully, though the cheese browned on top a little more than I anticipated.   I may try tenting them with foil next time. Even though the cheese was melted on the bottoms as well as the top, none of the loaves stuck to the parchment at all.  Each loaf was more than big enough to split, which means we got 8 servings out of the recipe.  I’m sure this recipe turns out great with gruyère, but I was really pleased with the flavor of the mozzarella/provolone/cheddar cheese blend that I used. 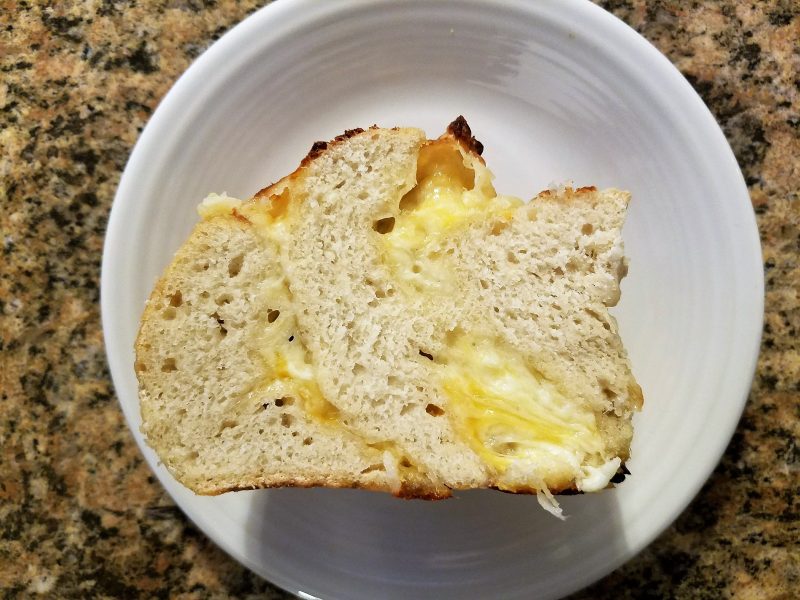 These loaves are especially good warmed up, but I’m sure they’d do fine at room temperature as well. We reheated ours for breakfast by slicing them in half and warming them at 350 degrees for 10 minutes.  I’ve been really enjoying seeing all the variations people are creating with this recipe and I look forward to making these crusty, cheesy loaves again soon.