It’s not that I didn’t want to cook with amaranth, or that I didn’t have any ideas, I just kept planning other things.  Integrating new ingredients takes just a little bit of extra planning and any sort of planning just wasn’t my strong suit over the past month.  Still, when all was said and done, I managed to try several different things with the amaranth.

Overall, I really liked amaranth.  It has a nutty flavor to it and a little bit of crunch, even when it’s cooked through.  Amaranth has much more protein than other grains and is gluten-free.  Unfortunately, since it’s a gluten-free grain many of the recipes I found that used amaranth in baking also included other specialty flours and ingredients that I don’t have.  This month I just didn’t have the time to track down additional ingredients or work out my own substitutions. 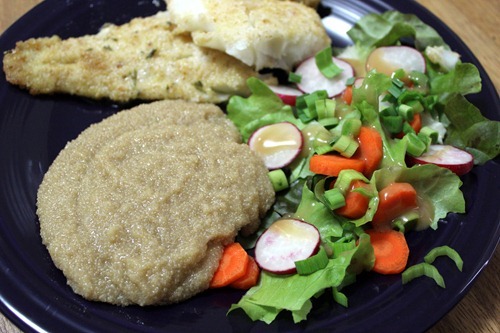 The first thing I tried with the amaranth was cooking it plain as a side dish.  There are a lot of variations online and the Whole Grains Council mentioned rinsing the grain to get some of the “goopy and viscous” starch off after cooking, but Brian and I weren’t able to come up with a good way to rinse such tiny grains.  So we left the starch and honestly, it didn’t seem goopy (at least in a bad way) to me.  It’s just creamier than most grains, more like a risotto or something.  Last week I made it again, using 2 and a 1/2 cups of water mixed with 1 cup of amaranth and cooking it for 15 minutes.  It was still starchy, but I like it that way. 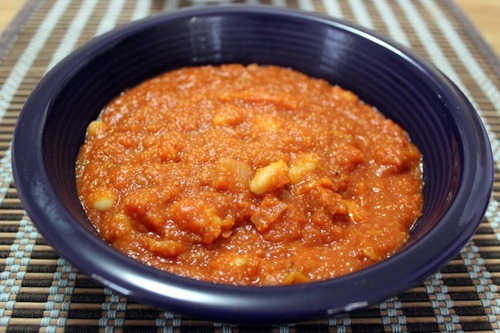 My next venture was Creamy Cannellini Bean and Amaranth Soup from the Whole Grains Council.  I really liked this soup.  The amaranth retained a slight crunch even after being cooked and pureed in the soup, which was hearty, thick and flavorful.  The photos are from the first night I served the soup, but we thinned it out a bit for the second.  Either way, it tasted really great.  I’ll definitely make it again (maybe later this week, if the rain keeps up).

For lunch last week, Brian put together a meal of beans, lentils, green beans and amaranth in a tahini sauce that was also excellent.  The amaranth and sauce kind of coated everything and created a warm, filling lunch.  The dish made me think of the Roasted Quinoa with Potatoes and Cheese that I made in March and I’m wondering if amaranth would be equally successful (and possibly more delicious) 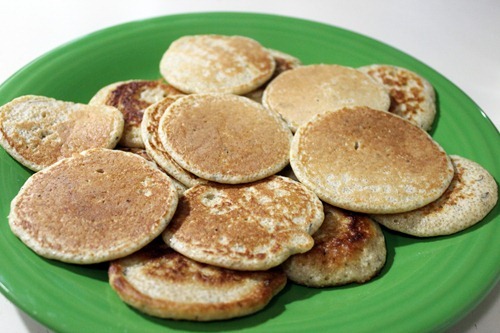 Last Saturday (when it was already June and I should’ve been done with amaranth), I decided to make one last amaranth recipe.  How to Cook Everything Vegetarian’s Crunchy Amaranth Griddlecakes.  I had high hopes for these little cakes, which were easy to prepare and cook.  Unfortunately, they didn’t really come out crunchy, probably because I have an unhealthy fear of burning things.  I think my pan may not have been hot enough, or my batter was too thin.  The amaranth texture wasn’t even that pronounced.  They certainly tasted good (I served them on top of a salad), but it was sort of like eating pancakes on greens, which is to say a little strange.

I also tried popping amaranth, but didn’t meet with a lot of success.  After doing some research online, I’m pretty sure my problem was putting too much amaranth into the pan at once, but I just haven’t had the chance to try it again.  The few bites we did have were pretty good, though it’s strange to eat something so tiny.

I think amaranth will make the occasional appearance on my table in the future, especially as a side dish or in soup.  I’d like to find a way to incorporate it into baking, but I have so many other grains in my pantry that it’s not going to be a priority.  June’s grain of the month is sorghum, which I’ve barely heard of and certainly never used.  I expect I’ll run into some of the same issues as I did with amaranth, but I’ll let you know at the end of the month!

Buckwheat Success and Failure
Trying Out Sprouted Grains
On Barley
Overachieving with Quinoa
Did you enjoy this post? Share it!
« Highlights: Frozen Summer Desserts
My 101 in 1001: 6 Months In »