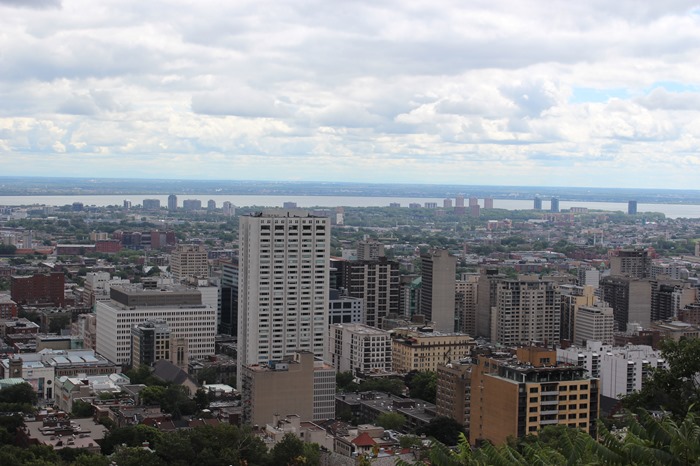 I spent last week with my lovely husband exploring as much of Montreal as we could fit into 4 days.  The trip was part of his 30th birthday present, but we delayed it until we actually had time to go.  Brian and I used an AirBnB apartment as our home base and covered a lot of ground.  Brian had never been to Canada and I was in Montreal in the spring of 2014, so it was a really fun trip for both of us.  I’m looking forward to writing more about it on Tuesday.  Even though we used public transportation when it made sense, we did a ton of walking anyway.  By the end of the week, we were being really intentional to take it slow, because we knew we had a 5k on Sunday.

This morning Brian and I ran the Dash for Dana 5k in Adams for the second time.  The weather was great and I love the route for this race.  The number of participants seemed a little low (there were only 30 of us for the group photo after the awards), which made it difficult for me to pace.  I didn’t feel great about the race; I was somewhat tired and, with no one running near me, was lacking focus.  It didn’t really matter though; as long as I finished the race (preferably not last), I’d meet my goal.  I was delighted to approach the finish line and see that the clock read 29 minutes and change.  Suddenly, a sub-30 race was a possibility and, despite telling myself to end with a steady pace, I sprinted to the finish.  My final time was 29:43, just seconds longer than the PR I set in 2011.  My time, coupled with the small number of racers, meant that I finished second in my age group.  I feel like getting second out of 2 is a little bit cheating, but I’m pretty proud anyway.  Local friends, you should join this race next year!

Since we were traveling last week, we selected the items for our share based on things that would travel well and we could make use of while in Canada (after verifying that we could, in fact, take produce over the border). 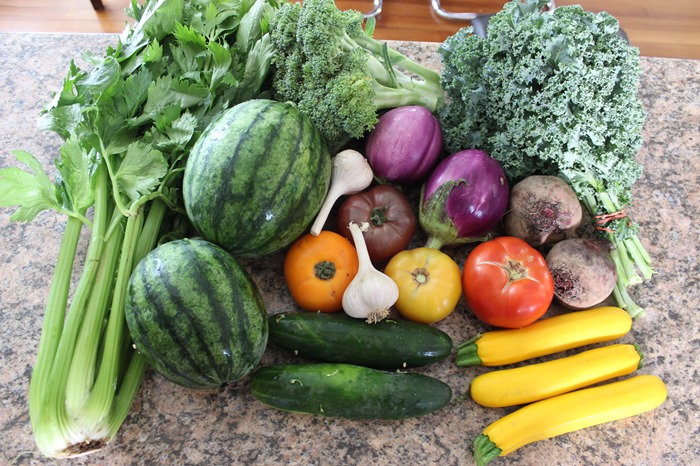 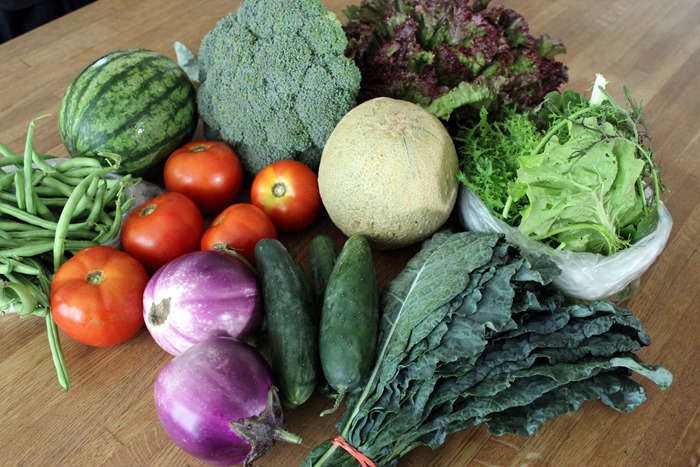 Before heading to Montreal, I cut up the celery, broccoli, watermelon and cucumbers.  They traveled with us in the cooler.  We also took a couple of the tomatoes and the summer squash.  I used the eggplant, kale and the other tomatoes before we left.  While in transit and in our apartment, the cut up vegetables made great snacks.  We “ate in” twice as well.  One night, I made pasta with pesto and sausage (that we bought in Montreal) and summer squash.  Another night we enjoyed leftovers from a restaurant and tomatoes with mozzarella that I’d also brought with us.  It was definitely nice to relax some evenings and save money while we did so.

You Win Some, You Lose Some
More Soup…1/19–1/30/14 Menu Plan
Photos, Leftovers and More (CSA Menu Plan #6)
Roast Everything (CSA Menu Plan #67)
Did you enjoy this post? Share it!
« 2 Great Summer Desserts from The Kitchn That Feature Bananas
Many Words and Photos About Montreal »