I had done so little canning this season that I was starting to feel kind of guilty about it.  My mother-in-law bought me a canning pot for Christmas, I’d made a list of my intended creations and I had an entire season to preserve things (as opposed to starting in August, as I did last year).  And yet, until yesterday, I had only canned 17 jars of pickles.  (The pickles turned out really wonderfully, by the way)

It’s halfway into September and increasingly apparent that the season is coming to an end.  So, this weekend I decided to make up for some lost time.   The plan: Bruschetta in a Jar and Pear Vanilla Jam.

Even though I’ve done it several times now, I still can’t seem to make a canning experience go perfectly. 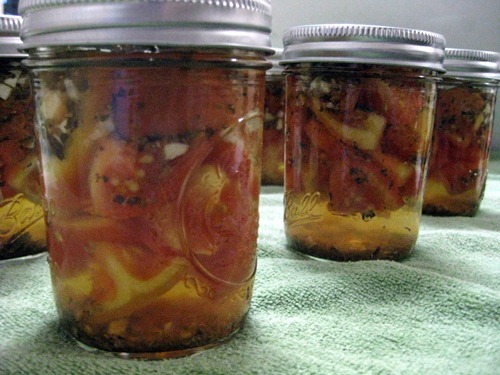 Issue 1: I ended up with way less liquid and way more tomatoes than I needed for my Bruschetta in a Jar, even after making Julie’s suggested adjustments.  Upon viewing the final product, we’re pretty sure that unbalance was due to my not putting enough tomatoes in each jar.  As you can see in the photo, there’s a decent amount of tomato-free space in most of the jars.  It’s not the first time I’ve had this problem, but you’re supposed to “loosely pack”, not stuff, the produce into the jars.  Hopefully my technique will improve with time. 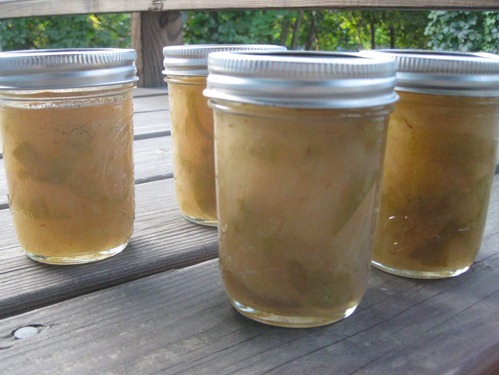 Issue 2:  Somehow in the transferring of the Pear Vanilla Jam to my Evernote account, the “7 half pints” in the instructions turned into “3 half pints”.  I know, it doesn’t make any sense.  I often prepare extra jars, so I ended up with 4 jars to fill, but I still had a lot of jam leftover.  I’m not really upset about it though, the jam is delicious and I’m glad I’ve got some in the fridge I can eat without unsealing any jars.

The good news is this: no jars broke or leaked, all the jars sealed and the food looks great.  Brian did a fabulous job removing the insides from the vanilla beans, which he’d never done before.  Apparently Alton Brown taught him how.  The jam was also my first pectin experience and from the looks of things, it worked great.  Neither of these recipes was particularly complicated and, if they taste as good as they look, I’ll be making them again next summer.

Next Stop, Jam
Jam Making Success
Food in Jars Book Signing
Making Up For Lost Time
Did you enjoy this post? Share it!
« Highlights: Ten Years Ago
Sometimes I Surprise Myself »