Before I can properly start this post, I really need to give a shout out to the lovely people at Kelly’s Package Store in Dalton, especially Jason.  Not only did they organize and host a great event, but they also saved this post.  I discovered on Monday after the event that I’d taken all of my photos on the wrong setting and couldn’t use any of them.  I sent Kelly’s a message on Facebook which Jason promptly replied to, letting me know that I could use any of their photos I wanted.  Later in the day, when the gallery of photos became available on their website, he messaged me again to let me know that the photos were up.  Thank goodness, otherwise this post would be image-less.

This weekend, Brian and I had the opportunity to attend the Western Massachusetts Craft Beer Festival in Dalton.  It was the festival’s 9th year, but our first time.  Due to an apparent fear of commitment on my part,  our tickets weren’t purchased online until Friday, but the $25 turned out to be well spent.  We arrived at the festival shortly after 2:00 when the gates opened.  The festival, organized by Kelly’s Package Store, was held in a field just minutes from the store.  There were a bunch of people already there, but we seemed to beat the bulk of the crowd.  We passed through the Will Call line with no one in front of us, gave them our names, showed our IDs and got bracelets.  We also picked up reusable plastic cups and the provided list of breweries which showed what they had available for sampling. 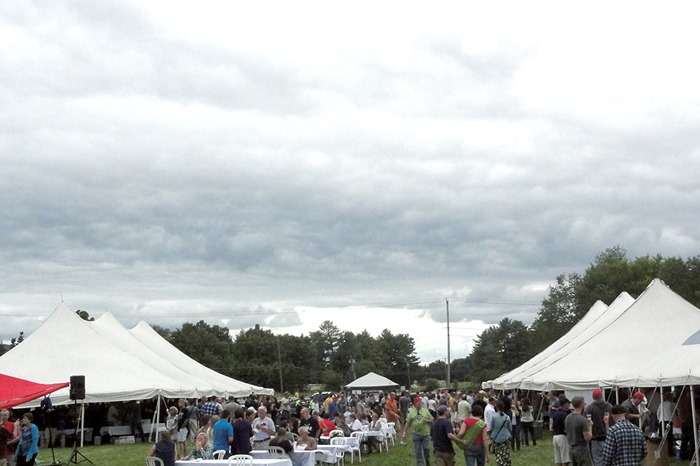 And then we had free reign.  There were no cards to have stamped or prices per sample.  If you had a bracelet, you could sample to your heart’s content from the over 60 breweries represented.  Immediately Brian and I adopted a strategy of maximizing our tasting of new beers by each trying different things; a “two to three ounce sample” (and no one was measuring, so who knows how big the pours actually were) was enough for us to get the taste of each brew and we figured we could return for more if we wanted to. 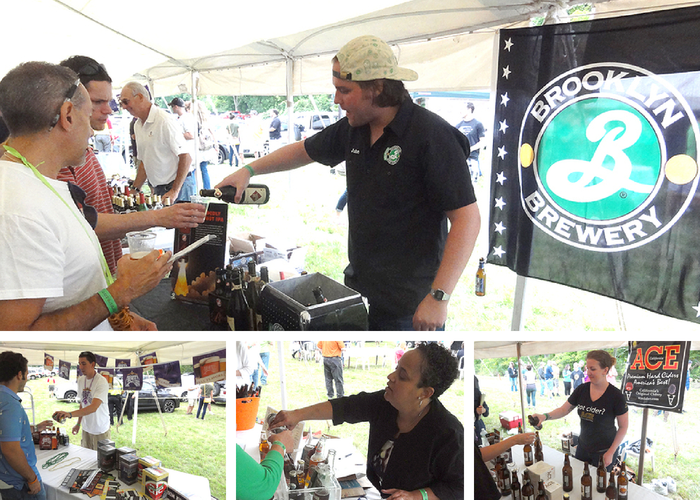 And so it went.  We went fairly quickly from table to table, checked out what they had, tried something, then moved on.  Occasionally we made use of the rinse stations and we appreciated the bottled water that was made available for free.  Though there was some opportunity to chat with the brewery representatives, I didn’t feel like I really had anything to say.  Beyond telling the gentleman from Baxter Brewery that I’d toured the brewery in Lewiston, Maine, I don’t feel like I have enough beer knowledge or insight to discuss it.  We also skipped breweries that we’d already had the featured beers from such as Brooklyn Brewery and Berkshire Brewing Company, in favor of trying more new things from new places.  Every few tables, Brian made notes on the brewery list about what we liked and what we didn’t so much care for.  Because what’s the point of discovering new things if you can’t remember them?  I’m really glad he did that; we tried a lot of beers. 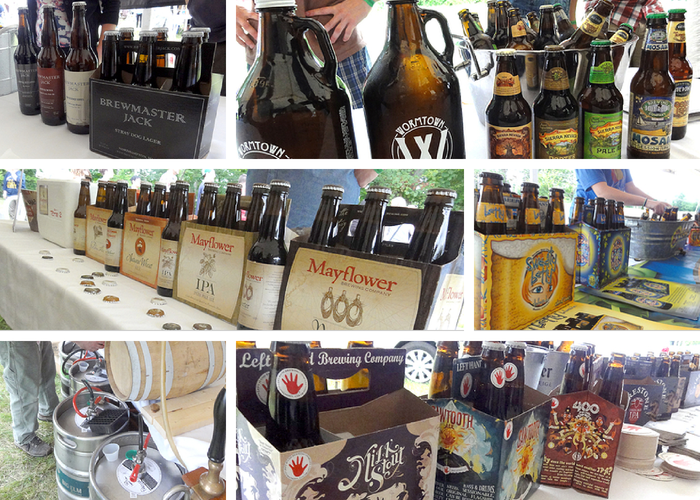 After making it through tents B and C, we paused and bought a sausage grinder from the Dalton Fireman’s Association and sat at one of the available tables for a bit before braving the rather crowded tent A.   Even in that tent though it didn’t take long to get samples; since there were no stamps or ID checks in the tents and only limited options from each brewery, there was never much of a wait to get beer in your cup.

The festival was a really good time; everyone in attendance seemed to be enjoying themselves and the crowds didn’t seem to be bothering anyone.  The variety of breweries present was awesome; there were big names like Sam Adams and Dogfish, but local breweries like Browns, Big Elm and Hilltop Orchards were represented as well.  We tried some really great new (to us) brews, including Boulder Beer Company’s Shake Chocolate Porter, Innis and Gunn’s Rum Aged and Alltech Lexington Brewing and Distilling Company’s Kentucky Bourbon Barrel Ale.   Once we’d sampled the beers we wanted, there wasn’t much to do so we only lasted a couple hours at the festival.  There were the few food trucks, a couple local food producers with samples and some live music, but that was it. If we’d gone with a group, Brian and I probably would’ve taken it slower and had more to talk about, but as it was just the two of us, we were pretty efficient.  Nevertheless, we felt like we got our money’s worth; we tried the majority of the breweries and had a great afternoon.  I don’t know that this will be an annual event for me (though the Kelly’s site mentions big plans for the 10th year of the festival), but I would definitely like to return in a couple years when the chances of new varieties of beer are even greater.

All images courtesy of Kelly’s Package Store in Dalton, MA.  We attended this event because we wanted to, not because of any prior connection or incentive.  We paid for our own tickets.

A Visit to Glass Bottom Brewery in Lee, MA
Breakfast at Dottie’s Coffee Lounge in Pitts...
Favorite Places: The Apple Barn
Highlights: For Your Summer Cocktail Party
Did you enjoy this post? Share it!
« Three in One (CSA Menu Plan #8)
Investing in Summer–Blog Updates, Home Improvement & Lots of Work »