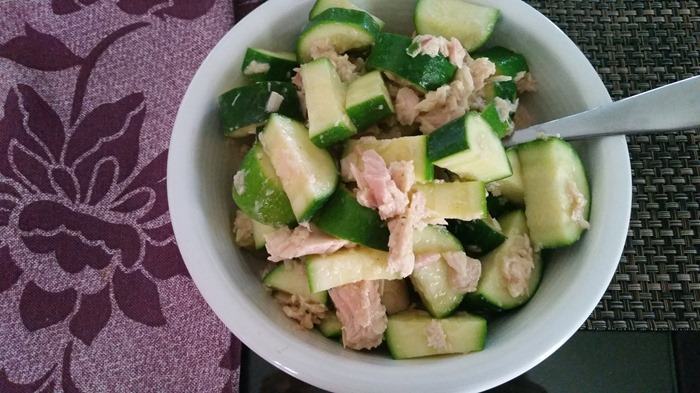 I confess: when my mother-in-law told me about this recipe, I didn’t really know what all the fuss was about.  But a couple weeks ago, Brian and I gave it a try and it was awesome.  In some ways, it’s not the more earthshattering idea ever; it doesn’t even look like much.  On the other hand, it’s incredibly simple and with very little effort you can have a delicious meal that makes use of the abundance of zucchini available this time of year.  It’s also a recipe that is very variation-friendly.  We didn’t have capers on hand, so the first time we made this recipe Brian substituted diced spicy pickles.  It was great.  The second time around (looks like this recipe is going to become a staple), we used diced pickled okra, which was also pretty great.  Also, tuna in water is pretty darn good if you don’t have tuna canned in water.

Get the recipe: Boiled Zucchini Salad with Tuna from Lidia Bastianich

I made a bunch of alterations to this recipe based on what I had, but this recipe encouraged me to do a couple things I’d never tried before, despite the fact that I make frittatas all the time.  The first new addition was pesto.  I used some of my frozen spring greens pesto, instead of basil pesto, and it worked great.  I’ve also never added tomatoes to my frittata, but the topping the eggs with slices worked and tasted much better than I anticipated.  I’m looking forward to making this one again.

Get the recipe: Tomato Pesto Frittata from Martha Stewart

The Time My Sister Gave Me a Kale Recipe
Breaking the Rules
Another Experiment: Tortilla and Bean Torte
I Am In Love With This Quiche
Did you enjoy this post? Share it!
« Summer Refresh
Highlights: Peaches »