Last fall I discovered the Whole Grain Council’s “grain of the month” calendar and will be trying out a new grain each month, just because I needed to add another goal to my life.

Even with leap day, I still couldn’t get my February grain of the month post up within the actual month.  I have a good excuse though-my sister got engaged yesterday and all my non-wedding related productivity went out the window.  Luckily, today was a snow day and I got the opportunity to make up for yesterday.

Initially, I was excited that barley was the grain of the month.  I like barley, I have experience with it, I already had a jar in my pantry.  But when I started looking into recipe ideas, I felt incredibly uninspired.  Maybe it was the fact that February was really busy, but I just didn’t see anything I was super excited to make.  Nevertheless, I did put together 3 barley recipes this month. 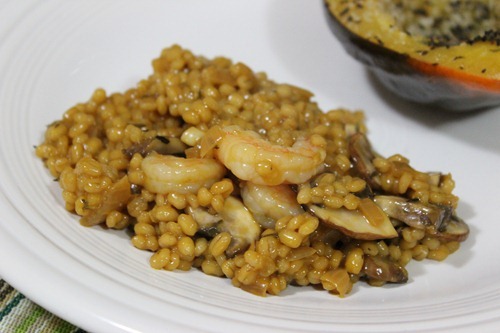 The first barley recipe I tried this month was Mark Bittman’s Barley Risotto.  I added some shrimp to the dish to help it stand as an entrée.  The risotto wasn’t as creamy and risotto-like as I’d hoped, but that may have been largely due to mistakes I made.  A fine dish, but nothing amazing. 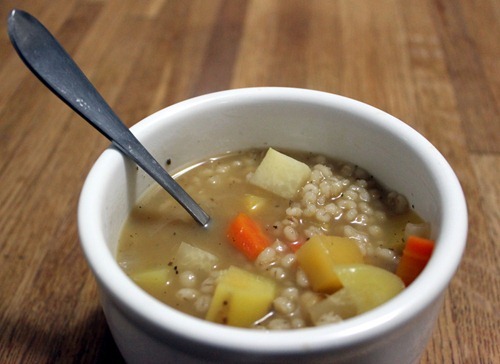 It only made sense to feature barley in a soup this month.  I opted to avoid mushroom barley because I’ve been unsuccessful with it in the past.  Instead I adapted a recipe from How to Cook Everything Vegetarian and combined kohlrabi, rutabaga, onions, carrots, broth, barley and herbs to create this soup.  I was really happy with the way it turned out; perfect for an end of winter evening. 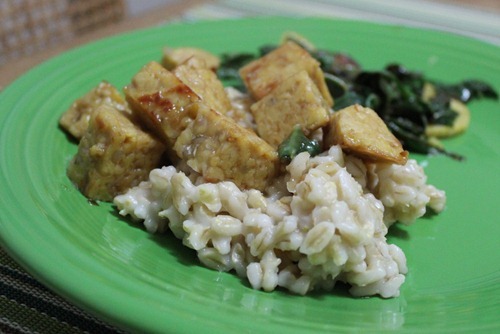 My last barley dish was one I’ve made several times before, 101 Cookbooks Orange Pan-glazed Tempeh, served over barley.  As you can probably tell by the photo, this was a different type of barley than I used in the other recipes.  Instead of buying the barley I usually get, I bought a bag of store brand pearl barley.  I though that the barley I’d been using was pearl, but apparently not.  These grains were much larger even before cooking and resulted in a much softer, starchier barley.  I wasn’t very happy with it (though the tempeh was great!) and I’m looking forward to using up the bag so I can go back to my usual brand.

March’s grain is quinoa, which I’m really excited about.  Quinoa is really popular, but I’ve only made it using prepackaged mixes.  I’m really looking forward to trying out some recipes on my own.