I have never been to a restaurant on its first night before.  Generally speaking, it doesn’t seem like a good idea.  But I’ve been following the progress of the Adams Ale House for months via their Facebook page and when their first open evening corresponded with our anniversary, Brian suggested that we try it out.  The menu looked good and the selection of on tap beers was impressive, but we went prepared,  knowing that the first night could be rocky.

The Ale House opened at 4 pm last Thursday and we arrived for dinner around 5.  I was surprised to see a pretty good crowd of people already there, despite the fact that the evening was a soft opening and not the Grand Opening scheduled for the weekend.  Brian and I were immediately walked through the bar area and seated in the dining room, “The Rustic Room”.  The room was not what I would term rustic, in fact it didn’t really have any decorations at all except for a couple of beer-related signs.  There were also several televisions mounted to the walls, tuned to various channels.  I presume that additional décor is in the future for the room, but the lack of it didn’t take away from the evening.

Brian and I spent several minutes pouring over the list of 22 on tap beers.  I started with a Long Trail Brown Bag Milk Stout and Brian with the Harpoon UFO White.  They were already out of his original choice, the Big Elm Brewing 413 Farmhouse Ale, which was surprising for so early in the evening but the sort of hiccup we expected on the opening evening of a new place. 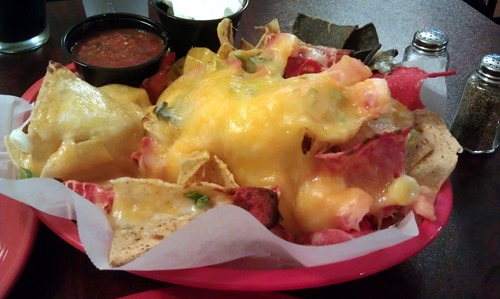 Always up for an appetizer, we started with the Ale House Nachos.  They took a long time to arrive, but the waitress was very good about frequently checking on us while we waited.  During one of those waiting periods, Brian went for a Berkshire Brewing Nitro Porterhouse Coffee.  I was starving by the time we finally got the nachos, which were good but not anything unique. 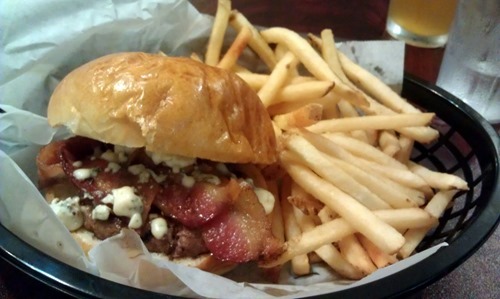 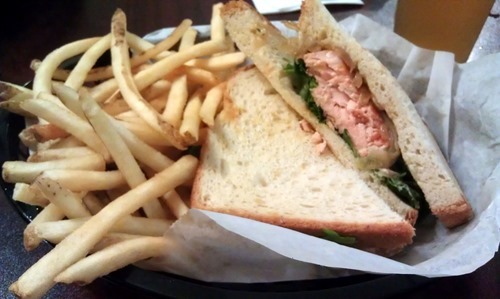 For dinner, Brian ordered a Bacon Blue Cheese Burger and I the Grilled Salmon Sandwich.  The food took a really long time to arrive, but I think much of that was due to a broken receipt printer.  Meanwhile, patrons continued to arrive and the restaurant was almost full.  Again, the staff was very apologetic and at one point a server came by with 2 on the house “over pours” of Harpoon UFO White, which I gladly accepted (even though Brian didn’t end up drinking his).  All told, it took about 45 minutes for our meal to arrive.  In a normal situation, that would really test my patience, but again, opening night.

Brian ordered his burger to be cooked medium, but when it came out it was cooked thoroughly through. He remarked that it was still moist and tasted good, nothing Earth shattering, but a solid option for an ale house.  He was very happy with the decently sized cuts of bacon that gave a great flavor to the burger.  My sandwich was good and I appreciated that I was given a choice of bread; I chose sourdough.  I loved the arugula and caramelized onions, but as you can see, the salmon was quite a bit smaller than the bread.  Luckily both the salmon and the bread had good flavor, so the sandwich was satisfactory over all.  In both cases, the fries were awesome and we enjoyed the leftovers reheated in our oven the next day.

I really like the beer selections at the Adams Ale House and the menu is solid as well.  I’ve heard from a number of local friends and looked at the restaurant’s Facebook page since last Thursday and it seems like things are running much more smoothly.  I’m looking forward to giving the Ale  House another chance later in the summer, especially for appetizers and a drink or two.

Disclosure: I tried Adams Ale House of my own accord.  I was not compensated in any way for this post and, as always, my opinions are my own.

Honeymoon Food #3: Iron Hill Brewery
Vote and Help the Pittsfield Farmer’s Market...
Closing Out Summer at the Berkshire Botanical Gard...
Favorite Places: The Apple Barn
Did you enjoy this post? Share it!
« Highlights: Hot in Here
Challah with Friends »

It's July and nearly 90 degrees outside, but I jus

One of my favorite ways to use produce, especially

Apparently red and green are the colors for this w

This week's CSA menu plan is (belatedly) live on t

Sharing is caring! This month, borrow a recipe fro

Took advantage of the new food vendors at @greyloc