I’m back! Most of you probably assumed that I was on more than just a “blogging break,” and sure enough, Brian and I were on vacation all the way across the country.  Thanks again to Caleb, Michelle, Katrina and Halley for writing such excellent guest posts.

Last summer, Brian and I didn’t go on a real vacation (we did go to Maine, but in my opinion, visiting family doesn’t count).  As early as last August, we vowed not to over-schedule ourselves this summer and take a real trip somewhere.  This spring, we discovered that we had both time and money and decided to make progress on my goal of visiting all 50 states by starting as far from home as possible.  And so, I planned a trip exploring the Pacific Northwest.  We packed a lot into 8 days, so I’m going to do my best to provide a brief overview of our adventures.  Monday’s post will feature some of my favorite things from our trip.

We flew into Seattle-Tacoma International Airport on August 2, obtained a 2011 Dodge Caravan rental vehicle and drove about 3 hours to our first destination: Portland, OR, affectionately known to my Maine family as “The Other Portland”.  We checked into the adorable Inn at Northrup Station and spent the evening wandering around the city, dining at a brewery (since Portland has more breweries than any other city on earth) and spending way too much time at Powell’s City of Books.

The next day we ventured down Historic Route 30, along the Columbia River Gorge.  When Brian’s dad heard that we were headed to Portland, he cited the Gorge as the one thing he regrets not doing when he’d visited.  It was totally worth the morning spent in the car, culminating at Multnomah Falls, the second highest year-round waterfall in the US.  It was only the first full day of our adventures and I was already captivated by the beautiful of the area…and the 60-70 degree temperatures, which were much more agreeable than the 90+ degrees we’d left. 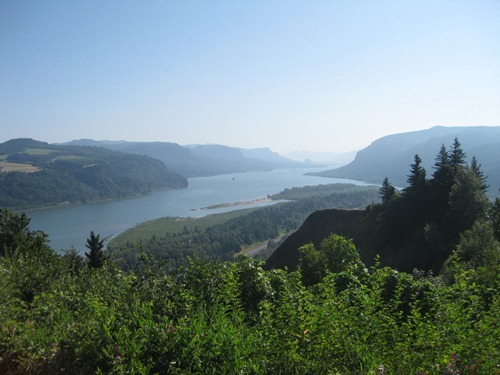 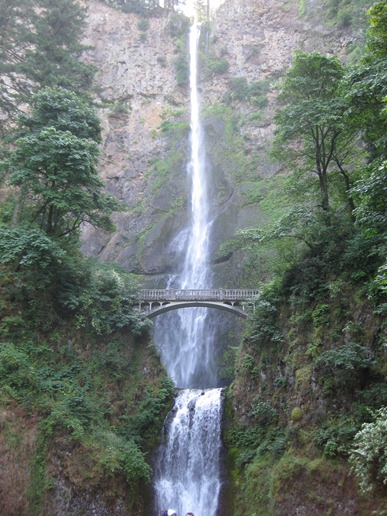 More exploring of downtown Portland rounded out the day, including a stop at Voodoo Donuts, which was totally worth the time spent in line.  We began Thursday by exploring Portland’s beautiful International Rose Test Garden and Portland Japanese Garden, followed by the Pittock Mansion and views of Mt. Hood and Mt. Saint Helens. 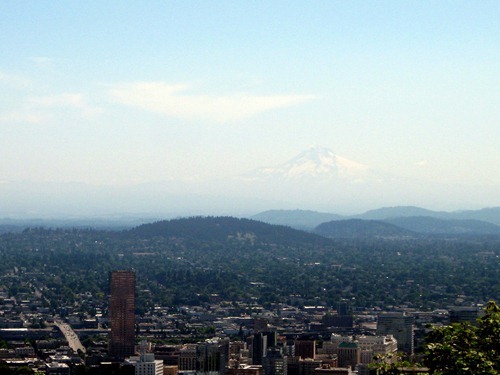 Only 48 hours into our trip, Brian and I moved on to our second leg: Olympic National Park.  Over the course of 2 days we visited 3 park locations: the Hoh Rainforest, Rialto Beach, and Hurricane Ridge. The weather held out and we had a great time on the trails.  It’s amazing how one park can contain such different ecosystems.  I absolutely fell in love with Hurricane Ridge, which afforded us beautiful views of the mountains, wildflower-dotted hills and multiple deer sightings.  We also made a brief stop in Forks, the setting of the Twilight books (which I have never read). 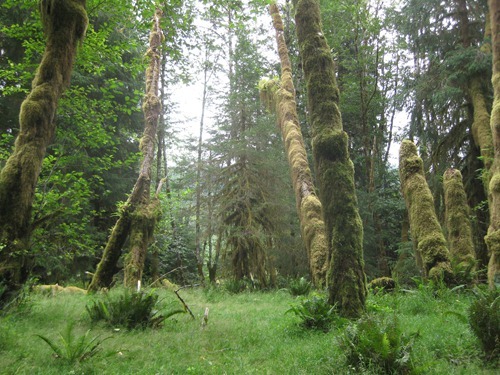 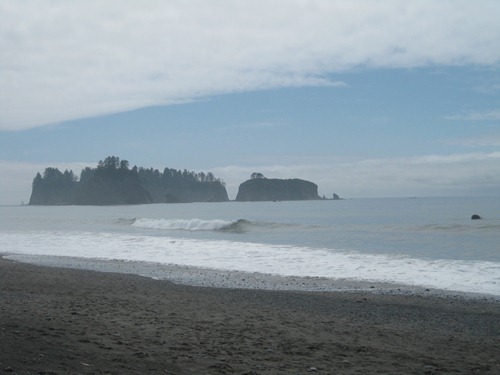 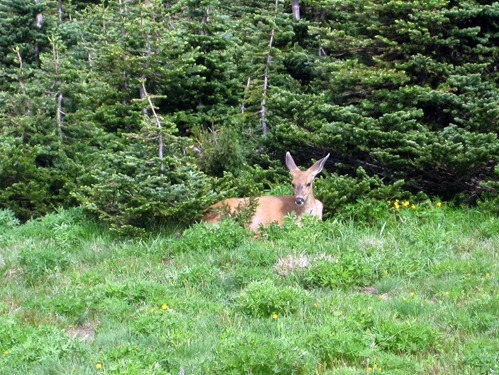 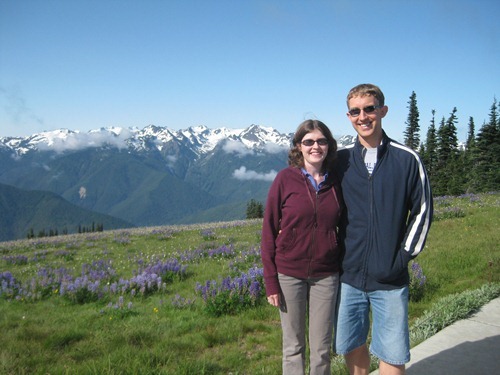 On August 6, after spending the perfect morning at Hurricane Ridge, we drove our car onto the Bainbridge Island Ferry and travelled to Seattle.  Neither Brian and I had ever been on a ferry before (at least that we recall) and it was an awesome way to start the Seattle portion of our vacation.  We spent a lot of time wandering around the city, much of it at Pike Place Market, ate some of the best food I’ve had in a long time and met up with some friends from college.  We also visited the EMP museum, checking out exhibits on Nirvana, Battlestar Galactica and Avatar (clearly this city was made for us), spent another morning at the Woodland Park Zoo and covered so much ground my feet are still hurting. 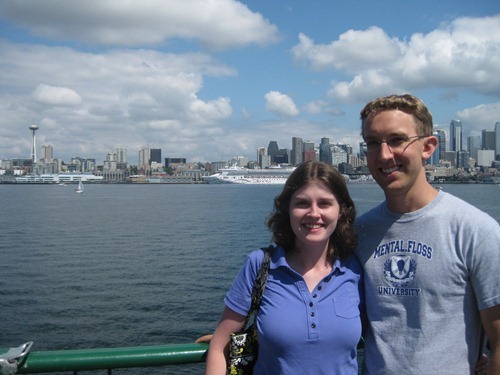 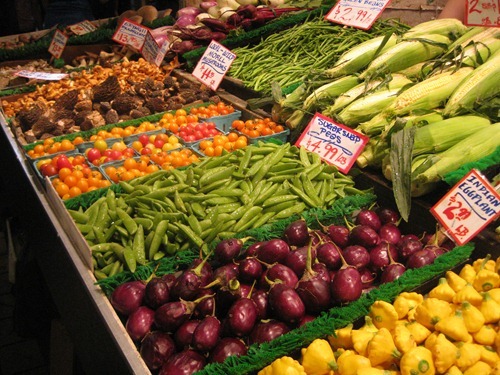 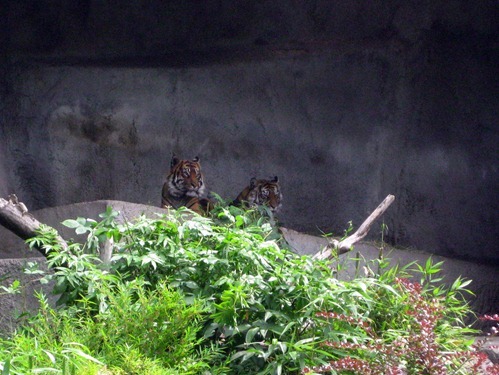 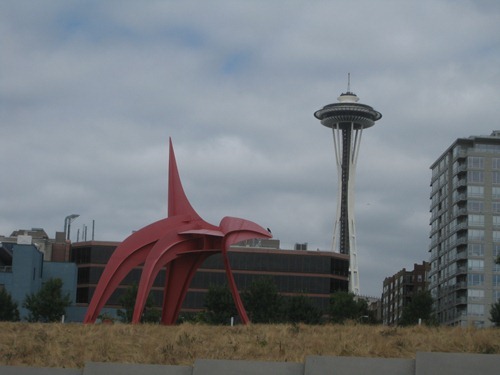 I loved the vibe of the area: the cities felt much less chaotic than the East Coast.  The food was amazing and quality local and vegetarian options abounded.  I saw the Pacific Ocean for the first time in my life, took over 600 photos, and checked 2 more states off of my “to visit” list.  And it didn’t rain on us at all.  This was definitely one of the best vacations I’ve ever taken.

Did I mention the food was awesome? 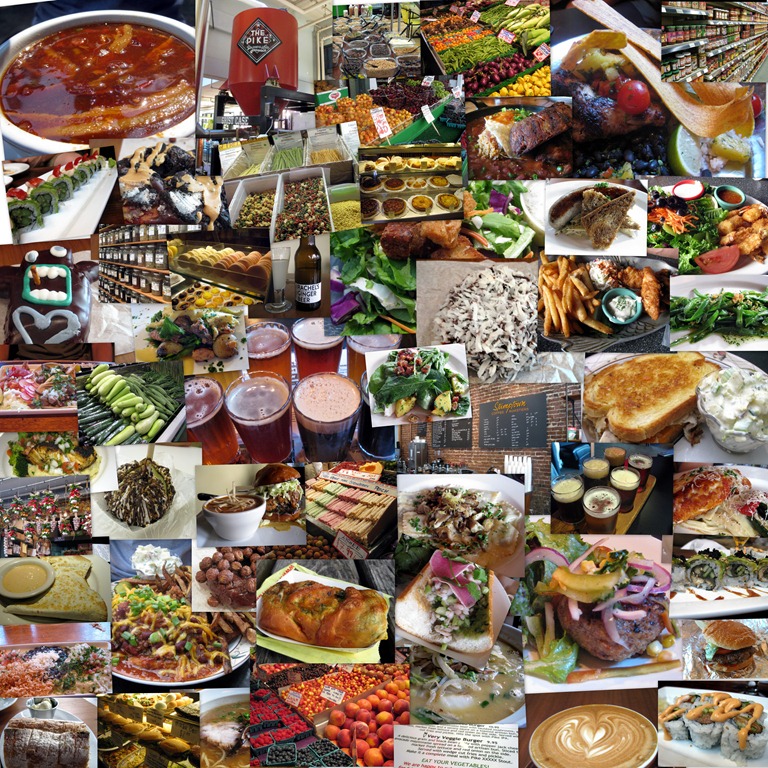 Montreal, a 5k and This Week’s Plan (CSA Men...
We Drove 6 Hours for Ice Cream
A Day in Hyde Park
The 5 Best Things I Ate in Ocean City
Did you enjoy this post? Share it!
« Guest Post: Halley’s Dog Days Dishes
On the Lack of Highlights »