I’m officially halfway through my yearlong adventure with the Whole Grains Council’s Grain of the Month Calendar.  So far I’ve cooked with corn, teff, buckwheat, oats and barley.  This month’s grain was quinoa and, despite initial disinterest on my part, I think it was my favorite grain yet.

I’d never worked with quinoa at all before (though I’d had it at restaurants once or twice), but unlike teff and buckwheat, it turned out to be both easy to use and delicious.  The best discovery I made this month was that you cook quinoa just like white rice.  All I did was combine 1 cup quinoa with 2 cups water, bring it to a boil, cover and turn the heat to low and cook for 15 minutes.  Rice used to be my go-to grain, but I think quinoa may replace it.

I also loved quinoa because the range of recipes available was immense.  For whatever reason, people are really creative with quinoa.  It seemed like every time I got online in March I stumbled upon another recipe I wanted to try.  So I made 5 different things with my new favorite grain. 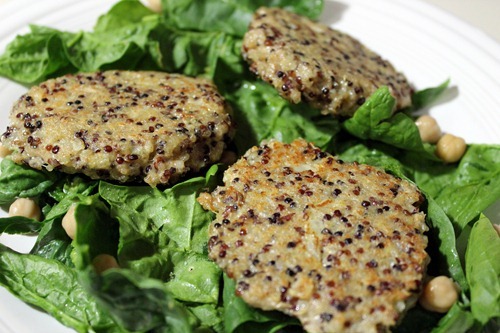 I made a variation of Closet Cooking’s quinoa cakes, following the recipe for the cakes but forgoing the sauce and egg.  I served them over a bed of fresh spinach.  For my first foray into quinoa, they turned out really well.  Unlike a lot of “cakes” I’ve tried making in the past with risotto or beans or other grains, these held together really nicely.  Since I left out all the toppings, the cakes weren’t life changing, but I’d love to try making them again with some additional flavors either in or on the quinoa cakes. 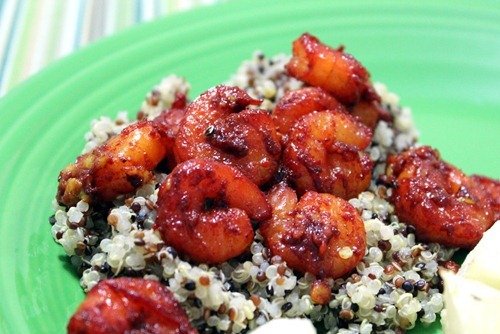 I didn’t do anything with the actual quinoa for this dish, but the grain was a perfect base for a variation on the recipe for Madhur Jaffrey’s Shrimp Biryani from Serious Eats.  I used the spice mixture on the shrimp, but basically ignored the rest of the recipe (apparently I was into ignoring parts of recipes during the month of March).   I loved the color the spices turned the shrimp, the spicy flavor and how well plain quinoa served as an accompaniment. 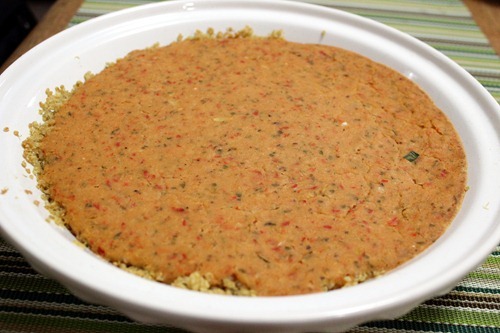 My next attempt in quinoa-land was a Mark Bittman recipe for White Bean and Sage Tart with Quinoa Crust from How to Cook Everything Vegetarian. It seemed like a neat idea, but the crust didn’t work from the beginning.  The recipe called for pressing cooked quinoa into a greased pan, but the grain didn’t want to stick together, especially on the pan sides.  The filling of beans, red bell pepper, onion, garlic and spices was pretty good, but I’m planning to revisit this recipe and make both parts work better. 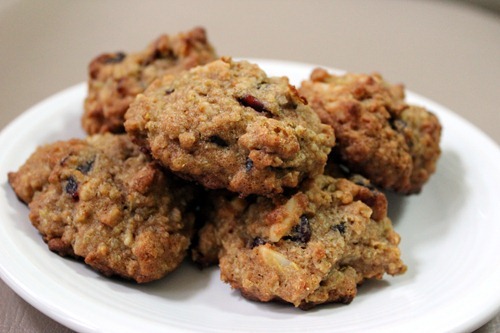 This recipe may be the best quinoa thing I made this month.  I found the Almond-Cranberry Quinoa Cookies via The Kitchn and was immediately intrigued.  Putting quinoa, oats, whole wheat flour, dried cranberries, and slivered almonds all in the same cookie sounded pretty awesome and, in the end, it was.  I’ve been eating them for a snack all week and they’re pretty filling for a cookie.  Some of the commenters complained that they aren’t sweet enough, but I definitely disagree.  My only future alteration would be to use sliced almonds instead of slivered, but that’s just splitting hairs. 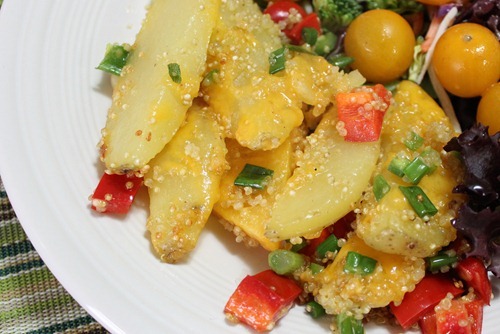 Another How to Cook Everything Vegetarian recipe, Roasted Quinoa with Potatoes and Cheese involved briefly boiling quinoa and potatoes together, then transferring them to a baking dish and roasting with red bell pepper, jalapenos and ultimately cheese.  We were a little short on potatoes, so I used a rutabaga to make up the difference, which worked out perfectly.  Some of my quinoa got over roasted (or under boiled?) which made it unpleasantly crunchy, but otherwise I really liked this dish.  It was fairly simple, made 4 servings and definitely hit the spot on our recent cool evenings.  The quinoa did take on the nuttier flavor promised by the recipe and I enjoyed the fact that it was a unique implementation of the ingredient.

March was definitely the most fun and most productive month of my whole grain adventure yet.  It’s a good thing because April calls for “sprouted grain” and I don’t even know where to begin!