One of my projects this summer has been getting to know my popsicle molds.  They’re not new and I have an ice cream maker that I also intended to try out this summer, but generally speaking, making ice pops has been far simpler.  I started out the summer searching my recipe collection, favorite blogs and Pinterest for popsicle recipes.

One thing that I noticed about ice pop recipes in general is that they’re not clear about how many they make.  My popsicle molds hold about 4 ounces, which makes them a bit bigger than many.  Many of the recipes I made half batches of, in an effort to keep popsicle consumption down and avoid having liquid that I didn’t have molds for. I tried to keep careful track of how many popsicles each full recipe yielded, for my own purposes and yours as well.  I also always skipped any instruction to wait before inserting popsicle sticks, as the sticks on my molds are not in danger of sinking to the bottom.

After trying out 7 different ideas, here are the results. 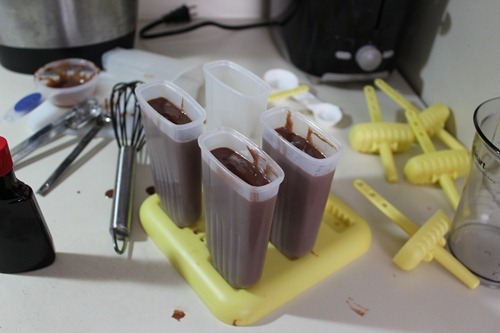 Fudge Popsicles (Smitten Kitchen):  Brian and I both loved these popsicles—they really are just like Fudgesicles—but they were also the most labor intensive and messy pops I made.  They require 7 ingredients, one of which I don’t normally have on hand (whole milk) and cooking before being poured into the molds.  I’m not sure if it was the fact that these were one of the first pops I made or if I’m just clumsy, but I had a very hard time getting the chocolate to find its way into the molds.  Delicious, never the less.  This recipe yielded 3 four ounce pops. 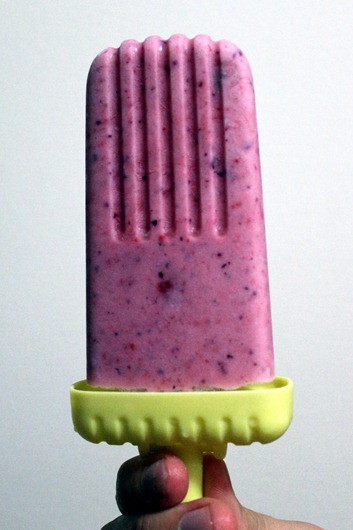 Yogurt and Fruit Popsicles (The Dinner Table): These popsicles only require 3 ingredients and I had them all on hand (and probably always will).  These pops had some of the strongest flavor of any I made and I felt really good about eating them—they’re just fruit, yogurt and honey.  I used my hand blender to make them, which made clean up really easy.  This recipe made 4 popsicles. 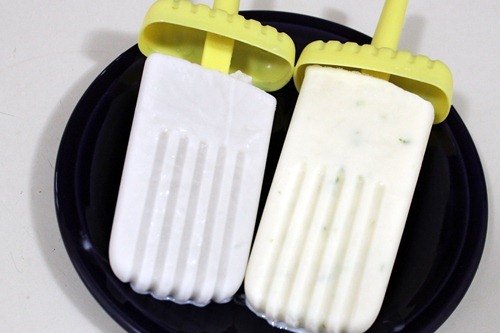 Coconut Nutella and Honey Coconut Popsicles (Hrrrthrr.com):  These were 2 of my favorite pops.  Simple to assemble, short ingredient lists and delicious, creamy flavor.  The Nutella popsicles (not shown) were dubbed “just as good” as the Smitten Kitchen fudge pops, but were worlds easier to make.  I left the shredded coconut out of the Honey Coconut (above, on left) recipe, which resulted in an even better texture.  I don’t think the shredded coconut has a huge impact on the flavor.  These will definitely be happening in my kitchen again. I got 3 popsicles out of the Coconut Nutella recipe and 4 out of the Honey Coconut.

Fany Gerson’s Lime Pie Ice Pops (The Kitchn): (on right, above).  These popsicles were simple to make, though I did have to buy sweetened condensed milk.  Because it seemed like it might not work and wasn’t worth the purchase of an entire box of graham crackers,  I skipped the final step of coating the popsicles after molding.  As a result, the popsicles are more like pie filling than actual lime pie.  I found them to be delicious, but a bit too rich by the end.  Brian, on the other hand, loved these almost as much as the fudge or Nutella pops.  I thought he might.  This recipe made 6 four ounce popsicles. 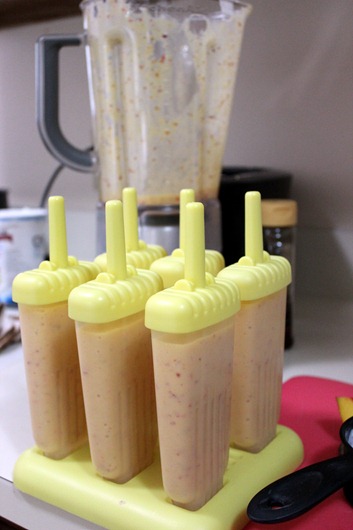 Peaches and Crème Popsicles (Babble): These popsicles were among the simplest to prepare, just throw the ingredients into the blender, blend and pour into molds. I loved the fresh, light fruity taste. This recipe resulted in about 6 and a half popsicles, but Brian enjoyed the leftovers as a smoothie, so it worked out. 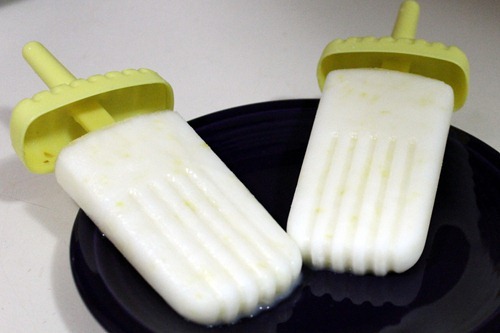 Creamy Lemon Popsicles (Gimme Some Oven):  These were the only popsicles I made this summer that I didn’t like.  I wanted to like them, they sound like an interesting idea, but it just didn’t work out.  The combination of the sour lemon flavor and the buttermilk left a really strange taste in my mouth.  Neither Brian nor I could finish an entire popsicle (good thing I only made a half batch). 1 full batch would make 4 pops. 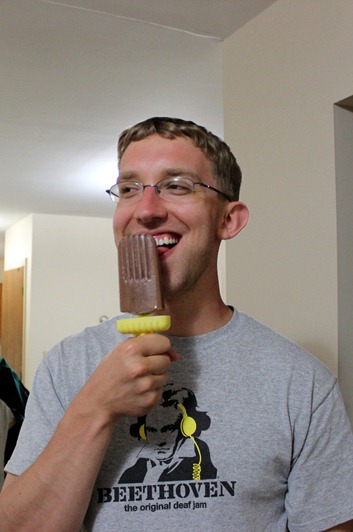 Special thanks to my favorite taste tester!