As you may know by now, I was in Maine with my parents last week.  I’d just come off a killer week with my summer job and I can’t remember the last time I was so excited to go on vacation.  And I’m always excited to go to Maine.  Brian and I had decided that it was time, once again, to do some exploring in Portland and check out another acclaimed restaurant.  We continue to look back fondly at our Fore Street experience, but decided to do something more casual this time around.

We headed to Portland pretty early in the day in order to browse some of the Old Port shops and arrive at Duckfat as close to 11am as possible.  Duckfat doesn’t take reservations and rumor had it that a wait was likely.  We figured going out to lunch and arriving at opening was a good way to avoid waiting for a table. 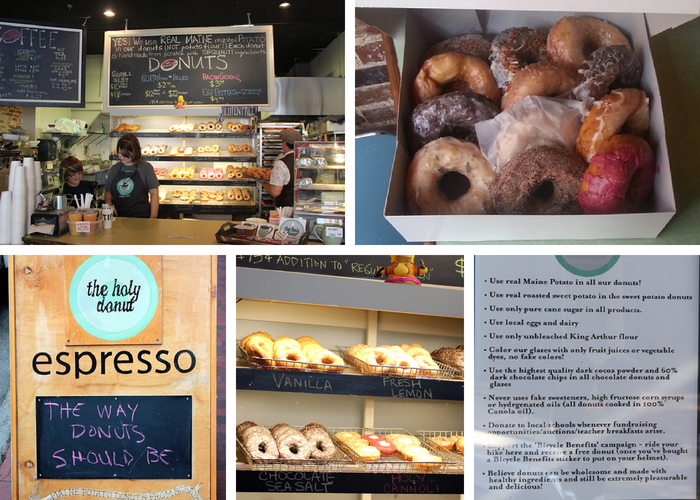 Our first stop was The Holy Donut, which has two locations in the city.  I saw their ad in a tourist magazine I picked up at the Kittery rest stop and, since we were headed to Portland anyway, I couldn’t resist adding some mashed potato donuts to the itinerary.  We arrived around 10 am and the shop was still doing a decent business, but wasn’t mobbed.  We decided to avoid indecision and ordered a dozen of various flavors, including chocolate sea salt, ginger sweet potato, mojito, coffee brandy and coconut.  Before leaving the shop we consumed a Holy Cannoli donut (it didn’t seem like it would travel well); it was awesome.  I was a little concerned that the donuts would have a lot of potato flavor, like potato bread, but it was really subtle.

We arrived at Duckfat minutes after 11 am, following a trip to the car to put the other donuts in the cooler for later and stopping at a few more stores.  There were already a couple tables full, but the long bar style table that runs along one wall was empty.  We were seated immediately and provided with menus to peruse. 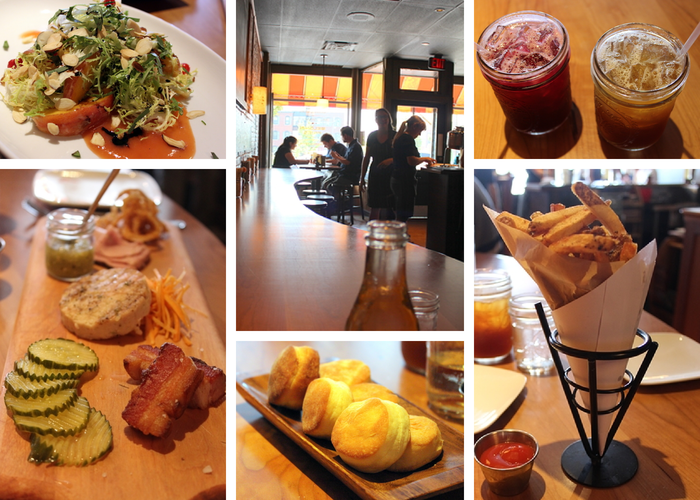 Everything on the menu looked great and we knew going in that there were a few things we wanted to try.  Brian and I both ordered craft sodas; I had grape and he had Roots, Barks, Sticks and Leaves, which was similar to root beer.  They were both good, though I’d order the Roots, Barks, Sticks and Leaves again if we get the chance to return.  We also got a small order of Duckfat’s famous french fries, which are fried in duck fat, of course.  As our entrée, we shared the sandwich board and a nectarine salad.  Duckfat’s menu is updated regularly and I neglected to take a photo of all of it, so I don’t remember everything in the salad, but it was really delicious!  On the day we were there the sandwich board included smoked country ham, grilled Thai chicken sausage, and crispy skin heritage pork belly.  This was only my second time trying pork belly and this time around I could see why people are so into it.  The sandwich board was also served with some toppings (tomatillo salsa, carrot slaw and pickles) as well as adorable tiny rolls.

We watched the small restaurant fill up as we ate our food.  The rumors were definitely true and by noon there was a line of people waiting to get in.  After consuming all that food, we really didn’t have room to eat anything else.  At the same time, we felt awfully tempted by the duck fat fried donut holes.  Apparently it was a donut filled day.  So we got an order to go and ate them a bit later, in Freeport before we started our afternoon outlet shopping.  The donuts came with little containers of caramel sauce and spicy chocolate, to dip the donuts in.  I don’t think I’ve ever eaten a donut with more sugar on the outside, but they were awesome. 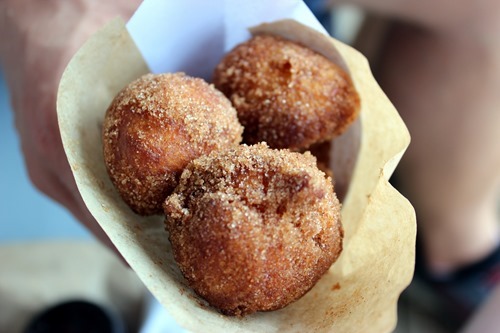 Given the opportunity, I would definitely return to Duckfat.  It’s almost too bad that there are so many other Portland restaurants I want to try and that I only get up there a couple times a year, if I’m lucky.  I always struggle with deciding whether to go back to places I really enjoyed or try new places on my list.  As for The Holy Donut, I definitely plan on making a stop there again.  My parents enjoyed sharing the donuts with us and it’s easy to swing through Portland to pick some up.  We’re already in possession of their frequent buyer card.

Vena’s Fizz House – Portland, Maine
Dining Out Vegan (Vegan, Days 5 and 6)
Dinner at Bascom Lodge
The 5 Best Things I Ate in Ocean City
Did you enjoy this post? Share it!
« View My Guest Post on Offbeat Home
Dash for Dana 5k and the Adams Farmers Market »