2) Have goat cheese from Trader Joe’s that needs to be consumed?

3) Need a delicious side dish?

5) Keep buying too much fall produce (potatoes, onions, etc) at the farmer’s market?

If so, I have the perfect dish for you.

One of the best outcomes of organizing my recipes has been a new-found motivation to actually use all my recipes which were previously just sitting in a big pile in my kitchen.  I no longer have a subscription to Everyday with Rachael Ray, but I clipped all the ideas that sounded tasty as part of aforementioned organization project.  Last week I tried out the Potato, Spinach and Goat Cheese Gratin from the December/January 2008 issue.  In the past, Rachael’s recipes have disappointed, but this one was an exception. 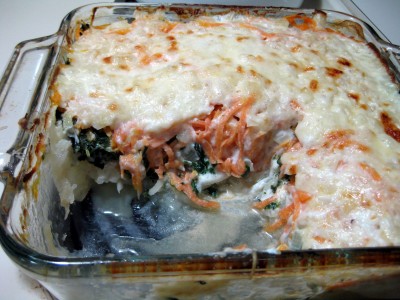 It was so good.

This recipe, in addition to being incredibly delicious, warming and comforting, is nice because chances are high that you’ve got most of the ingredients on hand.  I know I cook a lot, but I think a lot of people always have Parmesan, potatoes, milk, flour, butter and frozen spinach on hand.  I like recipes that don’t require a lot of grocery shopping.  I also love that this recipe has you shred all the potatoes in a food processor.  I originally thought (from the picture in the magazine) that the recipe used mashed potatoes which would add an additional step to the process. But this recipe is as simple as shred and add to the baking dish.

I halved the recipe and baked it in an 2-quart, 8×8 pan, which makes the ingredients list even more manageable.  Brian and I still got 6 good sized side dish portions out of it.  Plus, if you buy a standard sized log of goat cheese, you’ll still have half a log left for your snacking pleasure.  Since it was smaller than the recipe, I only baked it for 45 minutes total (30 with the foil, 15 without). 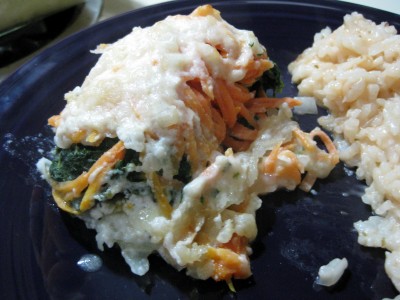 Potato, Spinach and Goat Cheese Gratin is probably going to appear on my table a few times this winter.  I highly recommend you do the same.