As I’ve mentioned before, I love fall.  The weather, the food, the holidays.   And though growing up my family never ate pumpkin (or any other squash), I really like pumpkin.  The availability of Starbuck’s Pumpkin Spice Lattes gets me really excited.  When Brian and I were visiting my parents for Columbus Day we bought a bag of Pumpkin Pie flavored popcorn from Coastal Maine Popcorn Company (it was really good!!!)) In short, I really like pumpkin.

Of course, this is all despite the fact that, until a week ago, I had never cooked with it.

That changed because about a month ago, I saw a post on $5 Dinners about a shortage of canned pumpkin puree, due to last year’s bad weather.  The article had a whole bunch of comments from people who were having a hard time finding canned pumpkin in their local stores.  Naturally, I became concerned and began looking for canned pumpkin every time I was in a store.

A couple weeks ago, I was thrilled to see that Walmart had canned pumpkin! Not wanting to miss out, I bought six cans.  Since then, it seems the shortage is over (that was quick!).  Nevertheless, I have six cans of pumpkin puree.  Luckily, many other food blogs are posting great pumpkin recipes.  We’ve been eating pumpkin-y foods all week in our apartment and I’m not sure it’s going to let up anytime soon, especially since pumpkin now seems so easy to come by!  This is the first of several entries which will focus on my experiments with recipes that star pumpkin puree.

The first recipient of my bounty of pumpkin was Pioneer Woman’s Moist Pumpkin Spice Muffins.  I figured, how could I go wrong with a Pioneer Woman recipe? 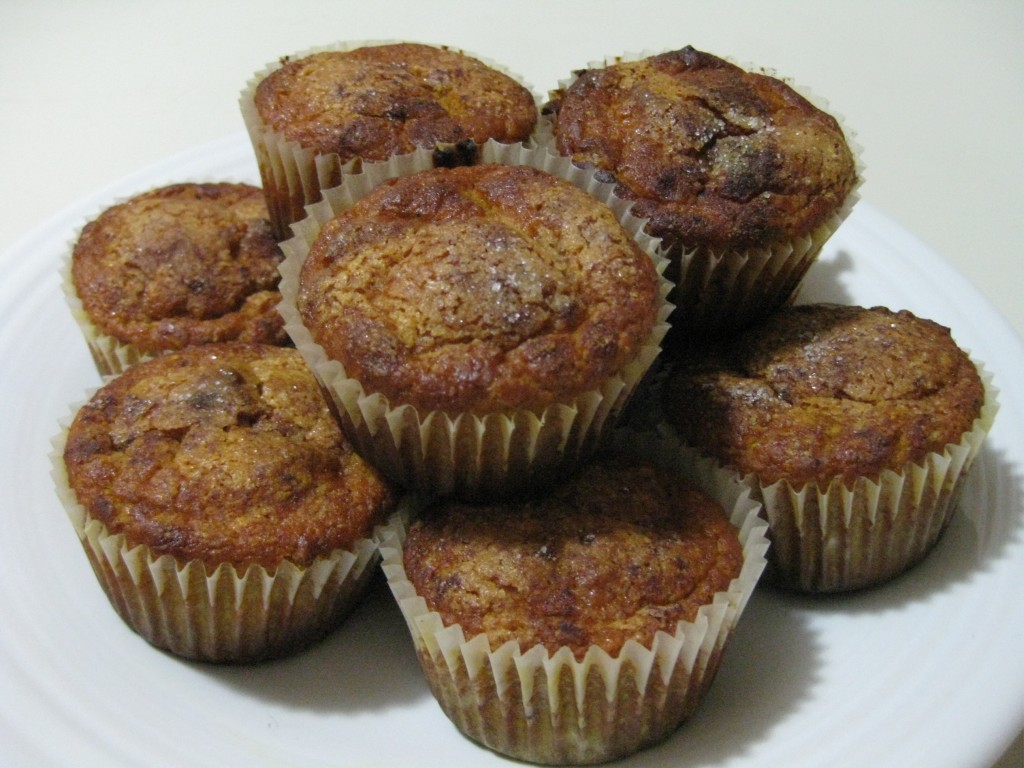 I was right, you can’t go wrong.  The muffins were really awesome.  Definitely moist.  I didn’t make the frosting because I’m lazy and cheap and not a big frosting person, but I’m sure it’s yummy too.  Oh, and I didn’t add the raisins.  One piece of advice: when she says “generously grease” the muffin tins, she means it.  I skipped it since I was using paper liners, but my muffins did stick to the liners a bit.  If you’re annoyed by the fact that the recipe calls for just over a cup for pumpkin, leaving you with about a 1/3 of a can, don’t worry.  Cook it up in a skillet with some nuts and brown sugar until warm and serve it as a side.  It’s pretty amazing.  Anyway, this muffin recipe is one of my new favorites and if you’re as into pumpkin as I am, you should check it out.

Come to think of it, I may need to make another batch of muffins for next week’s breakfast…