It’s possible that I said I was giving up on Rachael Ray recipes.

Why? Because in my recipe binder I had a recipe for Penne with Pumpkin Cream Sauce.  My love for pumpkin outweighs my disappointment in Rachael’s recipes. 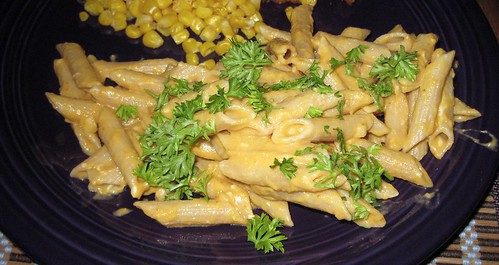 Luckily, this Rachael recipe was one of the better ones I’ve made of late.   The recipe is extremely simple: Cook pasta.  Cook onions.  Add pumpkin puree and heavy cream to onions.  Boil.  Add Parmesan cheese.  Add pasta.  Mix.  Serve with more cheese and fresh parsley.  Despite the simplicity, the pumpkin cream sauce was really yummy, though it did benefit from salt.  The sauce was, surprisingly, not overwhelmingly pumpkin-y.  But it was really good.  And it’s really nice to have something else on my pasta besides standard tomato sauce.

It is sort of a mental trip though…I kept expecting the orange pasta sauce to taste like cheddar cheese :)